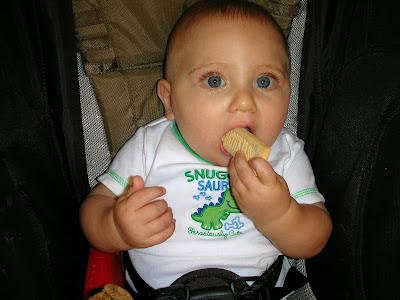 Nick is such a good sport. Today he was out all day and was an absolute doll. I dragged him hither and yon and then back to hither, but he kept in a decent mood anyway. Greg and I do this funny thing on days that I tutor--I go up and tutor from 8-10 and then Greg delivers Nick and all of his paraphernalia to me in a parking lot. Then I go to my school and do some volunteer tutoring. Yes, I'm a little bit crazy. But if I didn't love teaching, I certainly wouldn't be in this line of work.

It is pretty cool to see some of my ELL students coming in voluntarily to read with me. It's almost as if they like school, which I think is awesome. I like that I'm making a difference, so I feel good about what I'm doing even though it's not paid work. I am rather attached to my students, and I'm excited to see them working so hard over the summer. We give the kids these paper books that they can take home and keep. What's great is that some of the kids are reading the books over and over again. These books are sometimes the only ones in their houses. After tutoring, a few of them stay and play with Nick. One of my fourth graders was carrying him all around the room, talking to him and listening to him babble. I think Nick really got a kick out of listening to the big kids read. It was pretty cute because he kept babbling. "What is he saying?," one of my students asked. As if I know. :)

Today I had plans to meet an old friend at Meson Sabika for dinner at 5, so I had three hours to kill and a baby to entertain. Hmmm, what to do? I decided to walk around the mall, hoping that Nick would take a nap. He did, at least for an hour or so, and I got the opportunity to shop clearance racks a little bit and get some exercise. So long as the stroller kept moving, he kept sleeping. I walked the entire mall (both levels) twice. But then he decided that he didn't want to stay in the stroller anymore. I know he's a little bit small, but I took him to the kids play area with the soft floor. I figured he could at least sit on the floor for awhile and stretch his legs. At first, he wasn't sure what to do. 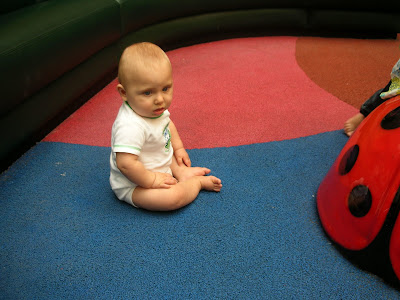 He just sat on the floor and watched the big kids run around. I was sitting right next to him so he wouldn't get run over. He liked watching the big kids, and this little girl kept looking at him and smiling. Nick smiled back, as he already knows how to flirt effectively at 8 months. How come I didn't master flirting until my post-graduate years? Although I guess he doesn't have to worry about pimples or whether his pants make him look fat. He's not wearing any pants, so it doesn't matter.

The soft gushy floor was pretty cool. I need to get some of that stuff to put under Nick's baby cage so that he stops bonking his head. Then he discovered the little tunnel. He really liked that. He kept trying to touch the walls, and he flapped his arms and bounced up and down. I ended up staying in the children's play area for 45 minutes--far longer than planned. But Nick was having fun watching all the kids playing. I think he is jealous of the ones who can crawl and climb and walk. Below is a short video of him happily playing in the tunnel. 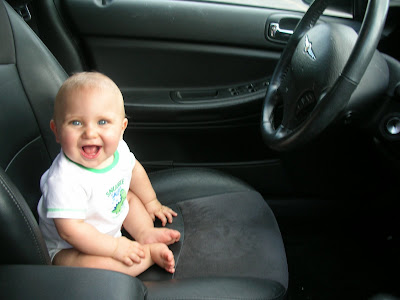 I still had time to kill, and Nick and I arrived early at the restaurant. But Mr. Nicholas did NOT want to sit in his car seat anymore, so I let him sit in the driver's seat, which he loved. He bounced up and down on the seat and tried to grab the steering wheel. I told him, "Not for another sixteen years or so, buddy." 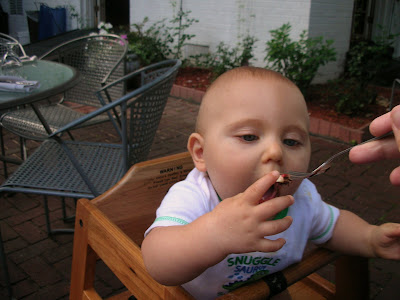 As I'm sure you can imagine, Nick once again loved the tapas. Today he ate duck for the first time, and seemed to like it just fine. Meson Sabika serves it with apples and mushrooms in this divine sauce. Nick kept grabbing for my fork, and he ate some tilapia as well as a bite of sauteed vegetables. Here you can see him trying a tiny bite of a chocolate mousse with raspberry sauce. 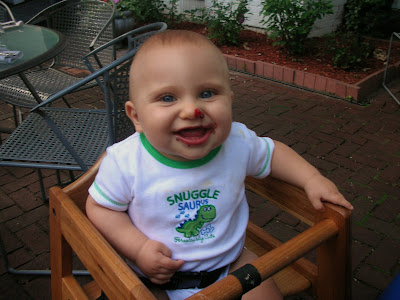 Here he is with raspberry sauce all over his face. Nick was pretty pleased with himself. For a baby, he does a great job in restaurants. My friend said she enjoyed meeting him. It was funny, because she watched him when I ran to the bathroom, and that's when he caused trouble. While I was gone (all of two minutes), he dumped over my water glass, dropped his cookie, and screamed. I guess this little man knows when to seize his opportunities.
Posted by Melissa E. at 8:58 PM