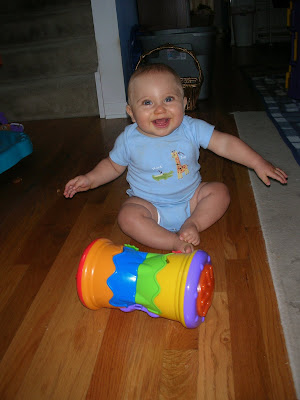 Today was a pretty good day. We went to farmers' markets in both Plainfield and Naperville. The Plainfield one was very small, but the produce that was there was good. The tomatoes especially were delicious, and I bought some homemade strawberry jam that is just divine. The market in Naperville is bigger, but crowded and more expensive. The blueberries were amazing, though.

Despite going out, I still had enough time to read two books: "What I Thought I Knew" by Alice Eve Cohen, and "Palace of Mirrors" by Margaret Peterson Haddix. The first was an adult memoir that was well-written and honest. I enjoyed it. The other was a teen book by one of my favorite authors. It was okay, but not her best work.

It's a darned good thing I have no trouble getting back into a book once I've been interrupted. I'm just glad I had time to read, in between playing with Nick, feeding him, and trying to prevent him from bonking his head. I can't keep him in the baby cage all the time, because that would be mean. So when I am directly supervising, I let him out to play and I sit next to him. Sometimes he still flings himself into something, but you can't protect your kids from everything. Plus, if he's always in a baby cage, an exersaucer, or a carseat, he'll never learn to crawl.

Nick is still figuring out the whole crawling thing. I bought him this new toy that rolls so he can follow it. He likes it a lot, but he can't figure out how to follow it around. That is because Nicholas only moves backwards. He can get up on his hands and knees, and I think he knows this is the way to do it, but he can't move forward. Poor guy. He gets frustrated after awhile, and reverts to flapping his arms and legs. But I try to let him try for a little bit instead of picking him up right away. After all, that's how you learn.

Nicholas can move, though, and I have the video to prove it. When he's in the mood, he can use his very strong ankle muscles to move backwards on his butt. He can go all the way across the living room, and I think he'd go further if there was more room. He seems rather confused, to me at least, as to why he is getting further and further away from what he's trying to scoot towards. As in, "Hey, wait, where am I? How'd I get back here?"