I think I've finally got it. . . the perfect breadmaker bread. I have been experimenting for several weeks, looking for a soft wheat bread that has flax seed, wheat germ, honey, and molasses. The nice part about trying out new bread recipes is that you get to eat your mistakes. Greg and I have eaten lots of mistakes lately, none of them too bad. But this bread is delicious! 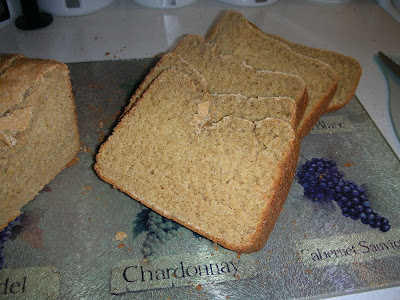 This bread makes about a 1.5 pound loaf. I made it exactly as you see below. For once, I actually measured accurately and wrote down every single ingredient. Really.

Put in all of the liquid ingredients first. Then put on the solid ingredients, saving the yeast for last. It works best when you make a little well in the flour and add the yeast so that no yeast touches the water before you start the machine. I used the whole wheat setting on the light crust setting. mmmmmm

Here's what it looked like in the breadmaker. Since it's a smaller loaf, it doesn't fill the pan entirely. I always worry when I'm following a recipe that "Maybe it doesn't look right." Thus I've included the pictures, so you know if it looks right. 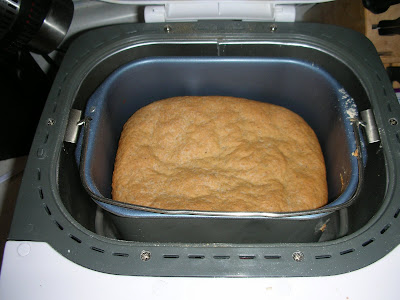 Then, here's what the loaf looks like when it comes out of the breadmaker. I like this size loaf, since it isn't as tall as the 2 lb. loaves. Perfect for sandwiches or toast. I have been having it with a little Promise Spread and these cherry preserves that a friend sent me last year. I've eaten the whole jar in just a few weeks, what with all of the bread we've been eating. 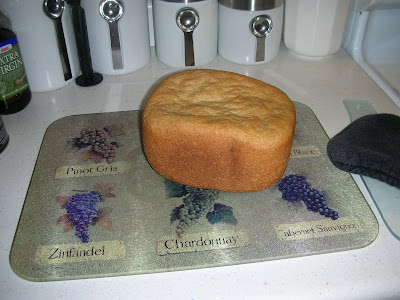 It's funny how quickly my summertime days fill up. Every year I think about how nice it will be to have all that free time, and every year I end up being nearly as busy as I am during the school year. It is my own fault, I guess. Today I started out by leaving the house at 7 a.m. to tutor for two hours. Then Greg and I met in a Walgreens parking lot so that he could pass Nick on to me. I stopped for some iced tea, then went to the bank. Nick and I went home for about an hour, then left again to head up to meet my sister for lunch. We had a nice lunch (yummy potato soup) and then I had to leave to go to my doctor's appointment. Right after that I headed to my mom's house for dinner (and to give them some playtime with the baby). So poor Nicholas got shuffled in and out of his car seat probably 47 times. He was a really good sport, though. When I was in the Panera, he sat on the counter while I was waiting for my food, and all of the guys working behind the food prep area came to see him and talk to him. He was cooing at them and laughing and making them smile. He seems to like being busy. Good thing, too, since I seem to always be busy with something.

Nick and I went out to visit my mom and stepdad today. They have a little pool in their backyard for the dog, and Nick got to go swimming. Or wading. Well, he sat in the pool and splashed, anyway. His favorite part seemed to be when Tigger (their dog) came to visit him. Here Nicholas is giving Tigger a kiss. . . or perhaps it was the other way around. Anyhow, doggie spit was exchanged. 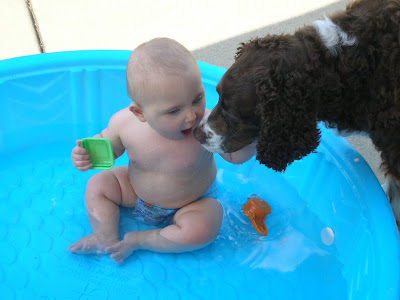 He really does seem to love the water. He made his muppet noise and splashed and played with whatever plastic kitchen thingies my mom was able to find for him. This next picture is me with Nick. He got me all wet because he thought it was hilarious to splash me by slapping both hands on the water simultaneously. I'm wearing Nick's favorite necklace. It was a birthday gift from my mother in law and sister in law, and Nick thinks it is his personal toy. I don't mind him messing with it, but I won't let him chew on it because I don't think it's child safe. So he gets upset when I wrestle it out of his little fist. You can also see part of my mom and stepdad's beautiful garden in the background. I had some more cute pics to post, but I didn't ask my mother or stepfather for permission to post pics of them, so I'll leave those for another time. I think I'm going to buy a baby pool for Nick this week--he loved it so much! 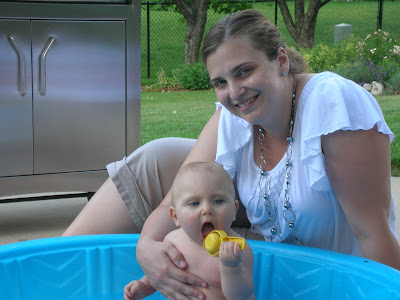