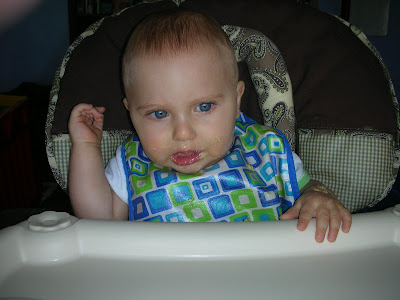 Not together, thank goodness! I actually like lima beans. My mom used to make this ham and lima bean stew dish that was pretty good, so I figured maybe Nick would like them, too. I was completely wrong. This is the rather petulant face he made when when I tried to give him more lima beans. It's like he's saying, "More of those? No way."

Next time I'll have to mix something with the lima beans. Perhaps that will make them tastier. In my own defense, I did try them first, and I didn't think they were half bad, although I wouldn't normally choose to eat them pureed.

Nick is still struggling with the whole teething thing; he actually has two that are coming in simultaneously. The picture below shows his swollen gums. His first teeth will be on the bottom gum, in the center. Nicholas has symptoms that I definitelyrecognize. Teething is just like PMS! He is moody, randomly in pain, always wants a cookie, and he suddenly flies off the handle and starts yelling and/or crying for no reason. Hmm. I know just how he feels, poor guy. Only thing is, I can't give him a nice glass of wine, a midol, and a brownie. That's what I would do if it were me. 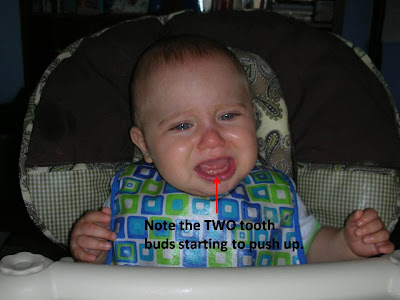 And orajel? Well, it works, if I can get it in his mouth. He sees me coming with the tube and starts fighting like mad. Then, once I put a dab on his sore gums, he makes the peanut butter face. You know, the same face a dog makes when you give him peanut butter. That stuff must work, because once the orajel is on, he calms down. I suppose it's better than putting whiskey on his gums. No, I would never do that. Not for the baby, anyway. When my wisdom teeth were coming in, though. . .

I had a great day today, although it started out messed up. I thought I had to tutor, so I woke up at 6:30 a.m., rushed into the shower and out the door, only to arrive at my student's home and ring the bell to find no one home. I screwed up, and I wasn't supposed to tutor today; the family is out of town. I believe that is yet another example of what you would call "baby brain." 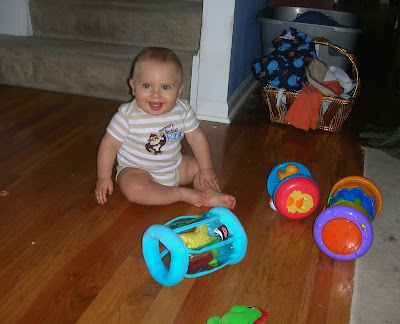 Much of my day was spent in the kitchen, making homemade baby food (like lima beans), granola bars, and bread. I love to cook, so this was great. Nick got lots of playtime on the floor, and I got to bake while listening to NPR. (I'm afraid I'm addicted. Nick is going to start talking like Carl Kasell one of these days.)

One of the recipes I messed with was a relatively healthy version of granola bars. I love the Kashi dark chocolate cherry bars, because they're high-protein and fiber. However, they are also expensive! So I combined several recipes and came up with this one. 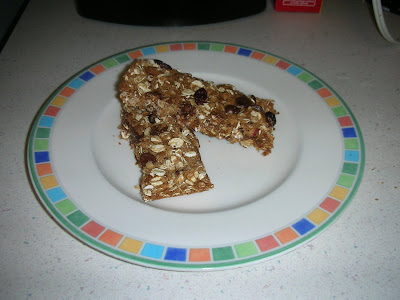 1. Preheat the oven to 325 degrees Fahrenheit and lightly spray an 11 x 13 inch baking pan with canola spray.
2. Put the dry ingredients in first, then the wet. Mix together, making sure to distribute the honey and molasses well. The dough will be sticky and crumbly.
3. Press the mixture into the bottom of the pan. Make sure you press hard. I used the palms of both of my hands.
4. Bake for 20 minutes or until it is lightly browned.
5. Cool completely and then cut into bars.