This afternoon, I was trembling with anticipation as I walked to the mailbox with Nick in my arms. I'd been waiting almost a week. Would it arrive today? It had been almost a week, and still no sign of the delivery. My heart was beating and my son was pulling my hair as I pulled open the mailbox. Yes! My prize was inside! I did a little happy dance right there, on the curb, as the neighbors looked on in surprise. Nicholas laughed uproariously at my joy, though he couldn't comprehend it.

No, I didn't order jewelry, or a handbag, or even gourmet chocolates (that was a few weeks ago). Last Thursday, the paddle for my breadmaker disappeared. Greg and I aren't sure what happened to it, although we looked everywhere for literally hours. He tends to blame himself, and apologized profusely. I, however, do not blame him, although I was really upset not to have a glorious loaf of French bready goodness on my plate that evening.

I blame the same mysterious force that results in the whole "socks without partners" phenomenon. My husband, bless his heart, is one of those men who, when he does his laundry, does not ever lose a single sock. No, Really. Not. Ever. Not even when he went to the laundromat. When I started doing laundry for him a few years back, he would become disturbed and agitated when he couldn't find the mate to a particular sock. Persistant to a fault, he would spend what seemed like an eternity searching for the errant hosiery until I'd finally cry out in defeat, "Just stop it! I'll buy you some new socks!" And I did. My trick was to buy six or seven pairs of identical socks, and thus the tragedy wasn't so great when a particular partner was lost.

I, on the other hand, have a pile of no less than thirty-three (I counted) mate-less socks sitting in my drawer, waiting to be reunited. The chances of this are incredibly slim, but I just shrug and sigh, knowing that as soon as I throw out a sock, its partner will miraculously reappear, just to taunt me. Even though I'm neither superstitous or particularly fanciful, I always figured there was a sock monster in the laundry room. How else can you explain the constant missing socks? The whole sock situation took on new, irritating dimensions once I had baby laundry to wash. Teeny tiny socks disappear even more frequently, and poor Nick has had to leave the house more than once in socks that don't exactly match. (Not that it matters, because he has now learned to tear them off.)

But I digress. I was talking about my excitement about getting the bread machine paddle in the mail. You see, last Thursday, as Greg was still searching valiantly for the missing piece, I quickly located and purchased one from Ebay. I figured that we'd only find the bread paddle once I'd actually paid for a new one. Because that's how Murphy's law works, you know. But we didn't ever find the darned thing. So no bread, until today, that is. I suppose I should show you what a bread paddle looks like, just in case you ever find mine. 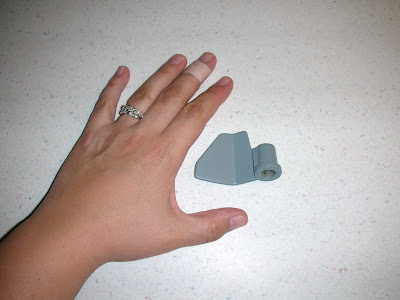 I put my left hand in there for scale, and it wasn't until I was editing the picture that I noticed how bad my hands are starting to look. Before I had Nick, I got professional French manicures every two weeks or so. I even had the acrylic or gel nails, which prevented me from biting my nails and cuticles. But manicures and baby poop do not go hand in hand, so to speak. So now I have "mom hands," which are useful but not very attractive. Oh, and the band-aid? I cut my finger while I was slicing the bread. Again. Sigh.

Anyhow, back to the bread. Within five minutes of checking the mailbox, I had pulled out my latest recipe creation, tweaked it, loaded the machine, and pressed the "start" button on the bread machine. Before the unfortunate thing went missing, I had tried several times to perfect a buttermilk recipe that incorporated whole wheat flour, ground flax seed, and molasses. I think I have a pretty good compromise between fiber, taste, softness, and slice-ability. Here's the recipe: 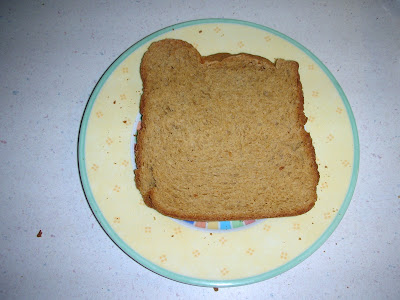 
1. Warm the buttermilk slightly and put it into the bread pan. Add the egg, molasses, and butter.
2. Put in everything but the yeast on top of the liquid ingredients.
3. Make a well in the flour and put in the yeast.
4. Carefully put the bread pan into the bread machine. Make sure the yeast doesn't mix with everything else.
5. Choose the wheat bread cycle, light crust.
6. As the machine works its magic, check on the dough to see if it needs a teaspoon of water (if it’s too dry) or a teaspoon of flour (if it looks too sticky). Mine was fine.
7. In about 4 hours you’ll have fresh bread. I like to slice it and put it into plastic bags, pushing out all of the air. It seems to last longer that way.


This bread turned out really soft, and the buttermilk makes it smell really good when it's warm. I might make some more tomorrow, because I'm having company. The smell of fresh bread is always nice when you have company. It makes your guests less likely to notice that there was no time to vacuum.

Tonight when I was feeding Nicholas his dinner, he kept wanting drinks of water. He was ravenous, and would've eaten more than 2 jars of baby food if I'd let him. Lately, whenever he sees me with a glass of water, he opens his mouth wide and leans towards the glass. (I've been working with him on the sign for "drink," but no luck so far.) He won't drink out of a sippy cup, but he loves taking big sips from my water glass. I try to tip the glass just so, making sure he doesn't get too much, but it doesn't always work. Nick pushes his head forward to get more water, which sometimes makes him cough.

Poor guy. Tonight he started coughing and up came his dinner. He'd had blueberries and bananas, unfortunately, and therefore needed a complete scrubdown. I sat him in the sink fully clothed and started using the sprayer on him. Nick thought this was hilarious, and it must've tickled, because he was giggling so hard. This was his second bath of the day, but he didn't seem to mind. He looked so adorable sitting there in the sink that I had to take his picture. 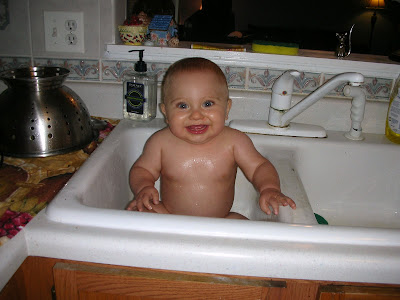