A Disturbance in the Library and Attempted Baby Locomotion

I have a little problem with reading--it's more of an addiction than anything else. Since I was very young, I've snuck around with a book the way some kids sneak cookies or (a little later) cigarettes. I read all kinds of books, and I also read newspapers, blogs, magazines, and educational journals. I'm most able to feed my addiction during the summers. I scour through Amazon and read reviews, clicking on book after book and adding titles to this giant list I have of books I want to read. Lately I've been going different libraries every week or so and filling a bag with books. The problem is, I never remember when they're due, so I have fines every time. Sometimes I think about just buying the books, but it's cheaper just to pay $5 or $10 in fines for a whole stack of books than to buy all of those books. Plus storage is an issue. My husband and I have bookshelves filled with books all over the house, and I don't think he wants me to buy any more bookshelves anytime soon. So I rent them. (I guess I'm renting rather than borrowing because I do end up paying.) Here are the books I found today. I'm especially looking forward to The Great Mortality by John Kelly, and Shadows of Forgotten Ancestors by Carl Sagan and Ann Druyan. I'm a big history dork. I remember reading The Man Who Mistook His Wife for a Hat by Oliver Sacks as an undergraduate, but I remember that I liked it, so I'm going to read it again. 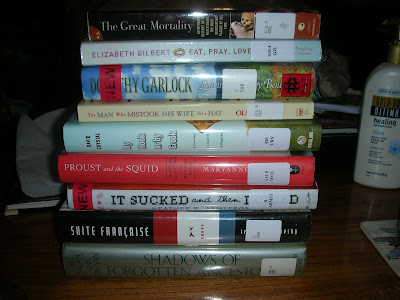 Today I went to the Plainfield Library to pay my fines, return 8 books, and check out a bunch of new ones. I had to take Nick with me, and he was sick of being in the carseat and stoller, so I just carried him and my purse and my book bag. Not a smart move. Now, Nicholas was in a pretty good mood at the time, and he just loved sitting on the floor next to me while I used the online catalogue and jotted down call numbers. When I went to hunt down the books, Nick kept stealing my list. It was just an old grocery list I'd used to jot down call numbers, but you would have thought it was gourmet cuisine, from the joyous look on Mr. Nick's face. He actually ate so much fo the list that I had to return to the computer and rewrite several call numbers. Observe the results for yourself. Sigh. 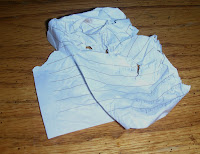 So anyhow, after I took away the paper, he decided that it was time to sing. Loudly. He was making farting noises with his mouth, yelling happily, and using his muppet voice to annoy all of the patrons hoping for quiet. One little old lady actually started laughing out loud at his funny noises. I tried to get him to quiet down by explaining that "Libraries are quiet places, and you need to use your inside voice." No luck. "Shh!" didn't work either, and he laughed and pulled out the binky when I inserted it. So my noisy son is the reason I left the library with only 9 books and a movie today. Should hold me for awhile, anyhow.

On to the locomotion situation. Nicholas is not crawling yet. I'm not necessarily worried, but I want to encourage him to develop crawling skills. Right now he has two tummy postures: 1. legs down, head and arms pushing up, and 2. legs and butt in the air, nose to the floor. It's pretty cute when he does posture #1, because he really thinks he's going to get somewhere. He pushes up with his arms and flaps his legs in a perfect frog-kick. Perhaps he'll be on the swim team someday, but it isn't helping him with the whole crawling thing. I will show pictures of both kinds of tummy time. 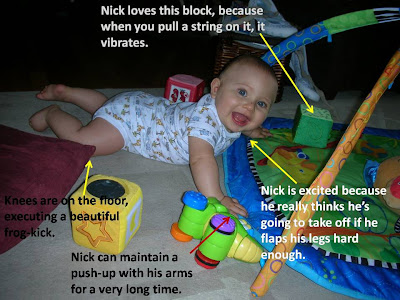 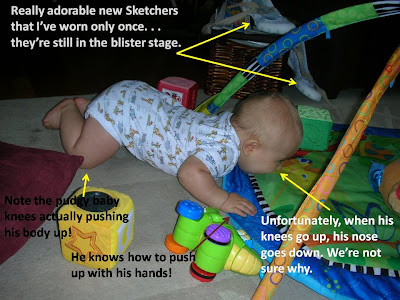 There's also a third kind of tummy time that's just come about in the last week or so. I don't have a picture of that one. When he REALLY wants to move, he'll put his face in the rug and push his toes on the carpet very hard, so that he actually moves a little. He can only move a few inches this way, and he gets a bit of rug burn, but I'm thinking that might be how he crawls at first. Either way, I'm in trouble once he starts moving around. I will have to endeavor not to leave random junk all over the place.

On Father's Day, my father-in-law and step-mother-in-law came down from Wisconsin, and they brought Nick the coolest baby wheels. Nick's first vehicle is a cute red little tikes car. He loves it so far, even though he isn't big enough to use his feet like the Flintstones on it. Here are some excited photos of Nick with his new wheels. I wonder if he'll be as excited when he gets his first real car. . .? 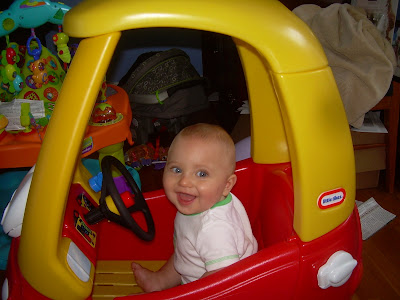 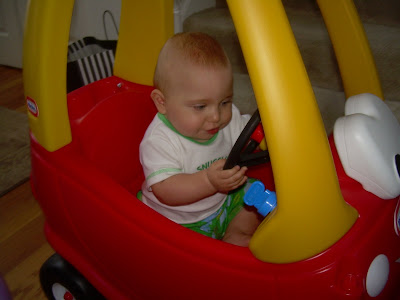