Dancing with a Monkey Friend 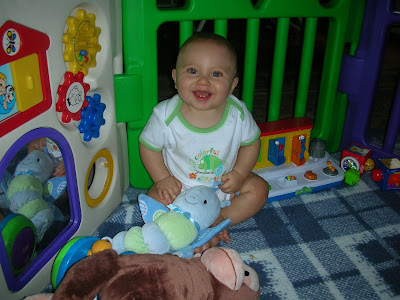 Nick helped me set up my classroom today. I worked with my two teaching partners, and we had a really productive morning. Nick helped by sitting on the floor and making cute little noises. I guess you could call him the entertainment.

He's doing pretty well with the baby cage, considering. I keep rotating the toys inside so he doesn't get bored, and between those and the exersaucer, Nick is a busy boy. Tonight Greg fed him some of our mushroom and spinach pizza. He seemed to like the garlic-y taste.


His gums have been bugging him, too, and he keeps biting on these teething rings that I put in the freezer and then let defrost. Poor guy. He had a great afternoon nap, though, and when he woke up he had a TON of energy. Below you can see him singing and dancing with his stuffed monkey friend.


I just finished reading Oliver Sacks The Man Who Mistook His Wife for a Hat. I believe I read at least a few of the chapters as an undergraduate, but it was an interesting book to reread. I find the study of the human brain fascinating. I was a little freaked out by the tales of people who lost parts of their memories. One man, for example, couldn't remember anything that'd happened after 1945. The idea of this is terrifying to me, because your brain makes you who you are. My maternal grandfather was in the beginning stages of Altzheimer's Disease when he passed away two years ago. I'm very sad that we lost him, but grateful, in a way, that he still recognized all of us to the end. 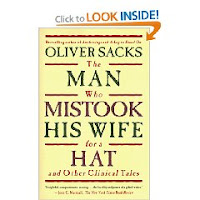 Grandpa retained most of his sense of self.

Probably my favorite case in the book is that of "Mrs. O'C," an elderly lady who spontaneously started hearing Irish songs from her childhood. The songs brought back incredibly vivid memories of her mother, who had died when she was 5. It turned out that she was having seizures, and they were activating parts of the brain having to do with music and memories. Some scientists hypothesize that all events we have lived are stored somewhere in our brains, dormant. Now, this is an older book, but doctors were able to stimulate healthy people's brains with electrodes and cause them to hear music from the past.

Probably I found this interesting because of my own memory, which is random and selective. I can remember general things about my childhood and adolescence, but often I'm surprised when others talk about events that happened long ago. These things ring a bell to me, but I have to think really hard to recall memories. Plus, I'm horrible with dates and such. My husband can tell me where he was on specific dates from twenty years ago, and I can't even remember what I did last Wednesday. I suppose, though, if I was reminded, that those memories would come back fairly quickly. I remember events (and the related meals) more than dates.

One thing I do like about my memory is that I am more likely to remember positive things. It isn't that I've had a perfect life, not at all. But I can think of my first year of college, for example, and mostly remember the exhilaration of living away from home and some of the great professors I had. I have a harder time recalling the loneliness and shyness I struggled with, and the devastation of my first relationship breakup. I don't think anyone has a completely objective view of his or her own life, but I'd much rather see my past through slightly rose-colored lenses. 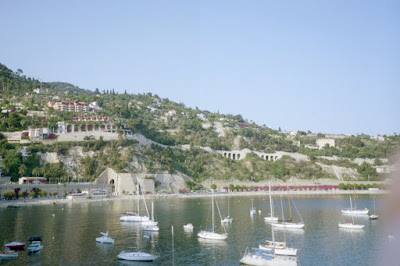 I guess that's one of the reasons I started writing a blog. I want to remember this time in my life, and this time in Nick's life. I was looking through some pictures last week of my trip to Europe in 2004, and I was a little worried because I had trouble recalling names, people, and places. There's this one picture that I love, but I can't for the life of me remember if it was taken in Italy or France. Maybe I should label my pictures so that I know when they're from. Or I could just ask my husband, I guess. I'm sure he'll know. :)
Posted by Melissa E. at 8:13 PM