Evidence of Teething and the Challenges of Babyproofing 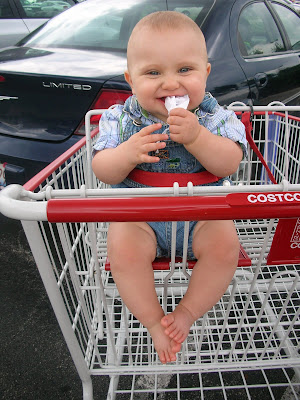 My son has started biting. He doesn't have any teeth yet, but I know they're coming, and I fear for my delicate skin once they arrive. Today he bit my finger, my wrist, my knee, and some flab on my arm. The season of teething is in full swing. How do I know this? Well, I do have some evidence. Please note Exhibit A:

Nick has been chewing on everything in sight. To your left, you can see Nick sitting in the Costco shopping cart the other day. If you've never been to Costco, you might not know this, but they check your receipt at the door every time. After paying, I walked to the door and the man asked for my receipt. I searched in my purse, but the man said, "I think your baby has it." And he did. . . And he had eaten it. It was mostly unreadable, but thankfully the man just laughed and said how cute he was. If he wasn't so cute, he'd have been in trouble. I could only giggle and search for my camera. Hopefully I won't have to return anything. 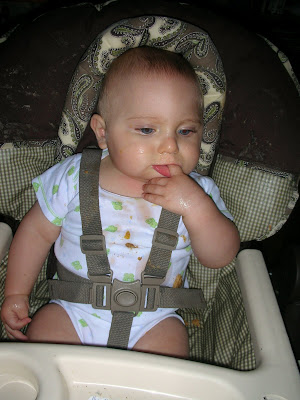 Then we have Exhibit B: excessive drooling. Nick has never been much of a drooler, but lately he's been having more and more drool on his clothing. He's also been touching his gums a lot. Here you can see him biting his own finger and drooling. He looks rather melancholy to me, but I suppose I wouldn't feel on top of the world if two teeth were coming in simultaneously. When my wisdom teeth came in, I was using a whole bottle of orajel every few days. So I kind of understand how he feels.

Greg says he can see the teeth under the skin of his gums, growing. I can't really see them myself, but I trust Greg. I can't feel too much, either, and Nick is not too keen on letting us poke around in his mouth. Usually he thinks it's funny and then bites down hard on your finger. 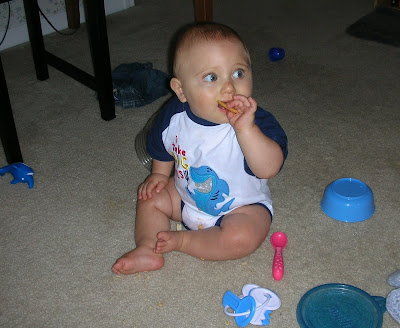 Moving on to Exhibit C: Teething on foods. Here, you can see Nick chomping down on a Ritz Cracker, his favorite. I think he likes the bumps around the edges; he usually sticks the whole thing into his mouth vertically and moves it back and forth, massaging his gums. Then he breaks it into little pieces, eats the gummy parts, and screams until I give him another cracker. I just noticed, too, that he's wearing a onesie that says, "I take BIG bites." And he does.


Below you can see Exhibit D: Random crabbiness. Nicholas is one of the happiest babies I've ever seen. I'm not just saying that because I'm his mom, either. I worked in day care centers for five years, often in infant rooms. So I have been around lots of babies and I think I have a good general idea of babies' temperments. Nick has an even, content temperment and he typically only cries when he's hungry, hurt, or tired. But lately we've been seeing these random bouts of crabbiness that don't seem to correspond to any of the above 3 reasons. So, like all parents in the history of parenting, we're going to ascribe this to teething. Unlike other parents in history, we're not going to "Rub some whiskey on his gums." Orajel, maybe. 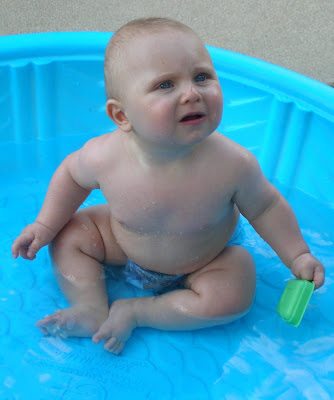 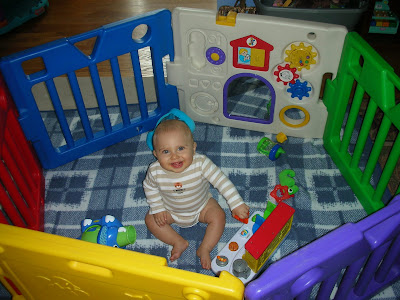 Greg and I rearranged our furniture this weekend, and tried our best to start baby-proofing. Our house basically looks like it was hit with a baby toy bomb. No more muted blues and browns for us; we're inundated with the stimulating colors of infancy: orange, lime green, and fluorescent yellow. We finally got the baby cage area all set up. I need to get more panels to make it bigger. Already, though, in order to make it fit, we had to move our kitchen table into the corner. Ahh, well. We never eat at the table, anyway. 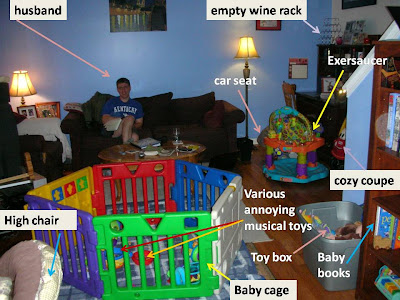 Above you can see the reality that is now our living room. Once it was a very adult, mature zone of enjoyment, with plenty of wine-drinking, shelves full of books, and muted color schemes. We loved the hardwood floors. Now the wine rack is empty, the adult books packed away (at least above waist level), and soft blankets laid on the hardwood floor to prevent baby bonks.

My first task was to pack up four giant plastic bins full of books. Greg and I are both lovers of reading, and we have multiple shelves filled with heavy books. I had to take everything dangerous and/or breakable off of the lower shelves, and therefore they became empty. We figured it was a lost cause, and just filled the shelf with baby toys and books. I miss my books. Plus, I have no idea how Greg managed to get the heavy bins down to the basement. Strong man!

Then, today, we had to clear a space for the baby cage. Last night Nick managed to scoot off of the blanket and carpet and fall backwards onto the hardwood floor. He clunked his head quite hard, and we realized that the baby cage was suddenly a must. After we'd moved furniture and rugs and laid down a soft, cushy blanket, we found another problem. Check out the picture below. During his scooting, Nick managed to move the entire baby cage about two feet. He moved it backwards, off of the blanket and the rug. We will have to figure out some sort of solution so that he doesn't keep moving the baby cage and clunking his head. Babyproofing is indeed a challenge, and Nick's not even crawling yet! 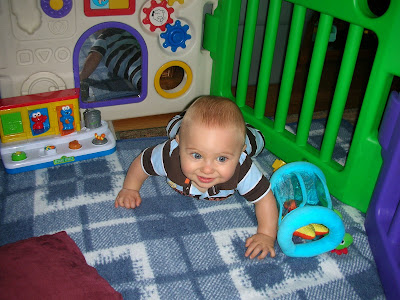