My senior in preschool had his curriculum night tonight. I've been waiting to do a post on Henry, because he hasn't been willing to tell me anything about school.

I found out a lot tonight about Henry's school, though! These were hanging in the hallway outside his classroom, holding up the artwork. Aren't they adorable?

Henry said he made this picture after reading "the boom boom book." He's talking, of course about Chicka Chicka Boom Boom, by Bill Martin, Jr. 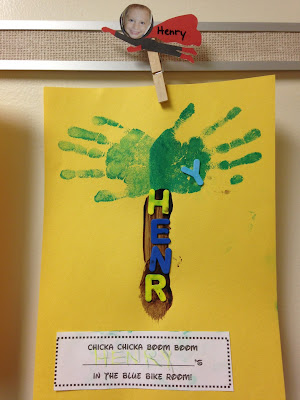 I haven't heard much about Henry's preschool thus far. He tells me "I don't want to talk about it!" when I ask. So I was happy to go in and see what he's been up to. His teacher tells me that Henry is pretty vocal and answers questions well in class. I guess when asked for his favorite color, he not only told his favorite (green), but his grandma's favorite color (purple). 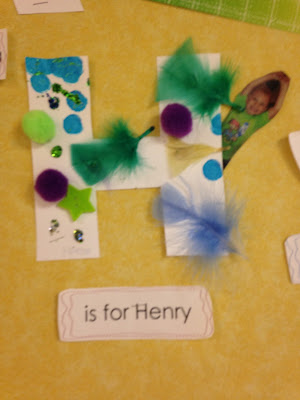 Henry has actually been sitting down and listening during circle time and story time this year. (I cheered when the teacher told me that.) 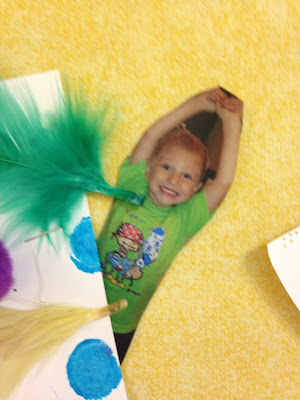 This was Henry's family apple. He had to decorate it and then add a picture of his family. The teacher hung them all on a big "family tree." 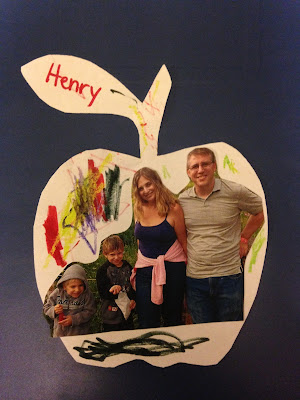 When I got home, I chatted with Henry and he did eventually start telling me some things he has done at school. (Finally!) I let him help me make dinner, and we decided to do breakfast for dinner. Henry even set the table!

Nothing beats French Toast and bacon on a Wednesday night.  :)


Henry, by the way, can eat more French Toast than either Toni or I. I believe he ate three pieces, two before dinner and one during dinner! 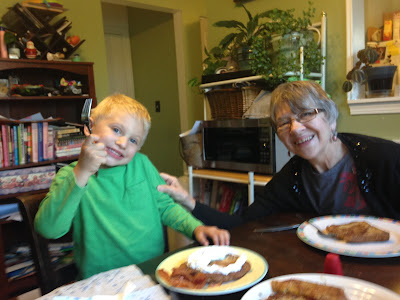 Then, after bathtime, Henry and I watched the video as we worked on the lyrics to "Do You Want to Build a Snowman." He's trying to learn the whole thing. 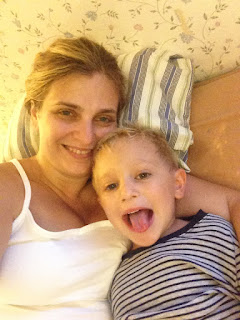 I'm hoping Henry will start telling me what he's doing in school now. We shall see, I suppose.
Posted by Melissa E. at 8:47 PM No comments:

Even though it is insanely hot outside, summer, for us, is officially over. The boys started back to school on Thursday. Here's Nick waving on his way to school Friday morning.


Here is Nick's first assignment from the first grade. It asks, "How do you feel on the first day of school?"


Yup. He feels sad. I can't say that I blame him, though so far I think he is liking first grade just fine. Nick has recently made a few friends in the neighborhood, and he loves the freedom of riding his bike to play with them. I hope this didn't make the teacher feel too bad, though I'm sure she's heard it before. I wonder what it would look like if teachers had to fill out this paper and illustrate it. . . Perhaps our answers would be similar to Nick's? I would write simply, "I feel overheated." (My school has no air conditioning.)


Ahh, well. Nick had a great first couple of days, no matter how sad he said he was--summer has to end sometime. I know that Nick wanted it to last longer, though. He is still wearing his Great Wolf Lodge bracelet from our trip in July!


Happy beginning of the school year!

Henry is already excited about his second year of preschool. I'm not sure what to call a 2nd year preschooler, but this is his last year before Kindergarten, so I've decided to call him a Senior Preschooler.  ;)


As I said yesterday, I decided to take the boys school supply shopping separately this year. Good call? I certainly think so--Henry enjoyed the one-on-one time and carrying his own basket.


Do you see the Olaf thermos Henry is holding? He is so darned proud of that thing--he's been carrying it everywhere.

Henry only needed a few school supplies (thermos, folder, markers, etc.), so we had time to choose carefully and to linger and stop for gelato afterwards. 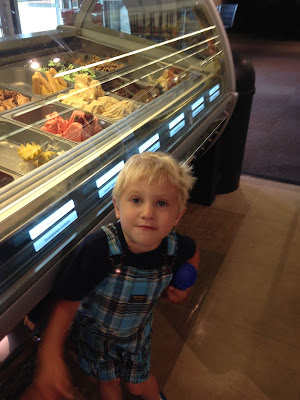 Mmmm. Gelato helped me deal with the fact that summer is almost over. 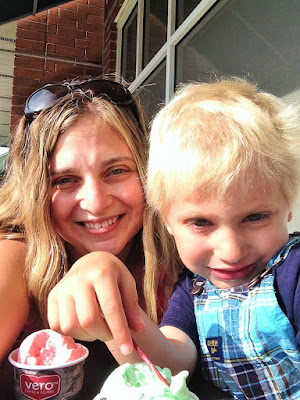 Also on the agenda last week was a haircut and Henry's four-year-old checkup. Apparently, Henry's right at the 50th percentile.  He's growing well and was very brave during his three shots.


And. . . he's ready for his senior year of preschool. The bus will pick him up bright and early Thursday morning.
Posted by Melissa E. at 9:16 PM No comments:

I can hardly believe that Nicholas will be going to first grade this Thursday. Really. My boy will be at school every day until 3:40 p.m. (Can you hear Greg cheering about this?)


This year, I decided to take the boys shopping for school supplies separately, so that each one could have a little time with me. (Also, so that Henry didn't cry because he doesn't need as many supplies as Nick.


First graders really do need a ton of supplies. I ordered a bunch of stuff on Amazon, but we still spent several hours in two different stores on the hunt for very specific items. (A two-pocket folder in orange? Not at Target, that's for sure.)


We had to drive up to the Meijer on the hunt for an orange folder and wide-ruled notebooks. I guess everyone bought out the ones at Target. I really like spending time with just one of my kids at a time. It's a nice change of pace. Nobody pokes anyone else, and there's no squabbling.


I suppose I like school-supply shopping a little more than your average mom. Teachers get a little too excited about back-to-school supplies, and I'm no exception.


I took this opportunity to take Nick out to lunch, and I let him pick. He chose The Lucky Bamboo, an Asian restaurant near us. I think it was the pinkest restaurant I've ever seen.


Since Nick's teachers requested all plain folders, (Boo, Hiss from Nick) I got Nick moustache stickers for name labels, and I let him pick out some stickers to decorate with. 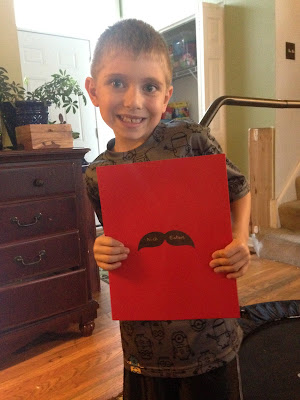 I would call it a pretty good day, though my wallet is much lighter than when I woke up this morning. Happy Back-to School!
Posted by Melissa E. at 8:16 PM No comments: