To all of the daddies, a Happy Father's Day! I'm lucky enough to be married to a spectacular daddy, who does all kinds of amazing things for his boys. I will be thrilled if our sons each grow up to be just like him. 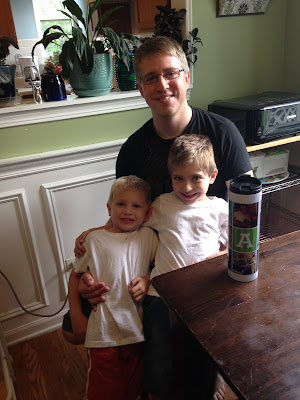 This year, we made a special Shutterfly mug for Greg with pictures of him and the boys. Coffee is one of Greg's favorite things, so he'll get to use it quite often. Oh, and dress socks. We replaced Greg's entire collection of dress socks, because we give exciting gifts like that. I would've taken a picture but I didn't want the wonderful awesomeness of the dress socks to be too blinding. Instead, here's a video of Henry doing his happy dance for Father's Day. (Nick did some dancing, too, but he wouldn't let me get him on video.)

I made a cheesecake for Greg, too (chocolate-chip with Oreo crust), but I didn't take a picture of it because it cracked down the middle. The crack didn't inhibit the deliciousness, though, thank goodness. Yum. Anyway, here are the links for Father's Day 2014, 2013, 2012, 2011, and 2010. Have I been doing this for six Father's Days? Wow. Happy Father's Day to all of the daddies and grandpas out there, especially Grandpa Mike, Grandpa Jay, and Grandpa Ray!
Posted by Melissa E. at 10:30 PM No comments:

A few weeks ago, we went to the annual Star Wars Festival in Joliet. We went in 2013 and 2014, and had a lot of fun. I really didn't want to miss it this year, even if it did overlap with one of my craziest weekends all year. (Let's just say I had hundreds of pages of final papers to grade for my grad students.) This event was a great distraction from my work, and a ton of fun for the boys. 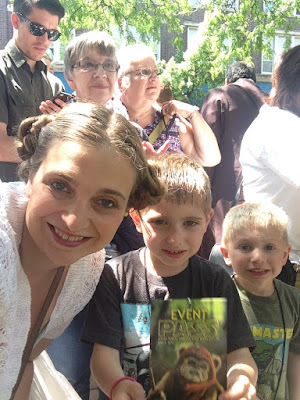 There was no shortage of costumed ladies and gentlemen at this event, and Henry and Nick wanted to check out every last Jedi, Storm Trooper, and weirdly tattooed individual. 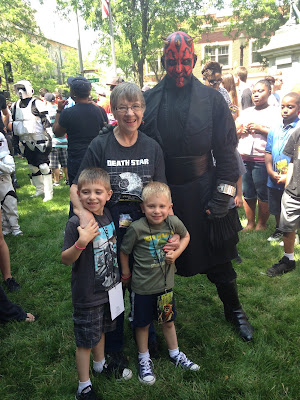 I'm told the guy standing next to Grandma Toni is Darth Maul. Henry was only a little afraid of him. Nick? No fear at all. The boys wanted me to dress up too, but I didn't have anything appropriate to wear, so I improvised with the Princess Leia buns. 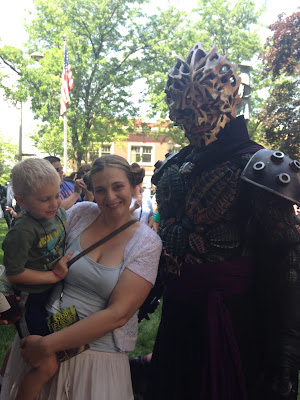 There was so much to see, and everything was exciting to Henry. . . especially his new action figure. 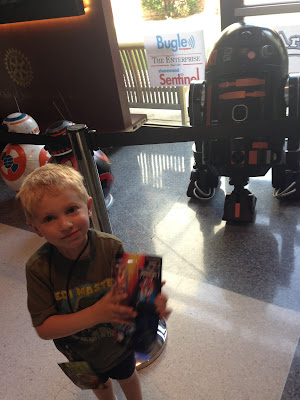 I ended up missing most of the Star Wars references at this event, since I still haven't ever seen any of the movies all the way through. That doesn't seem to dampen the enthusiasm of these boys, though. 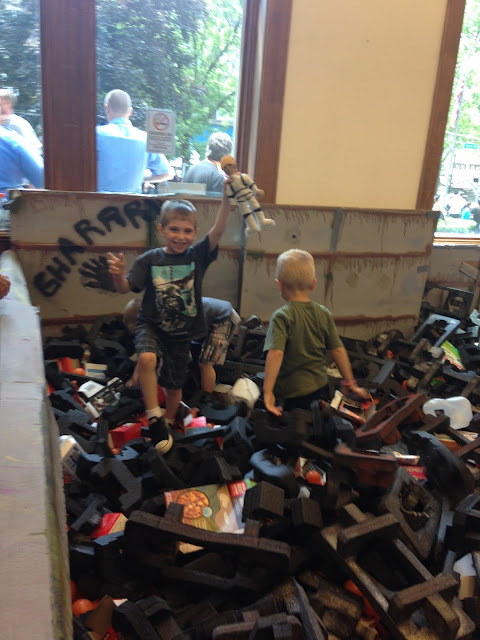 Nick found one of the dolls during the trash compactor challenge. He was very proud of himself! Henry had a costumed visitor while he was doing Death Star Bowling. 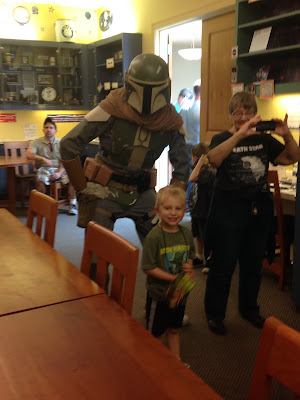 They want me to take them bowling for real, now. If this summer continues to be so rainy, we'll have lots of opportunities.

There's only one opportunity each year, though, to whack off this abominable snowman's arm with a light saber. 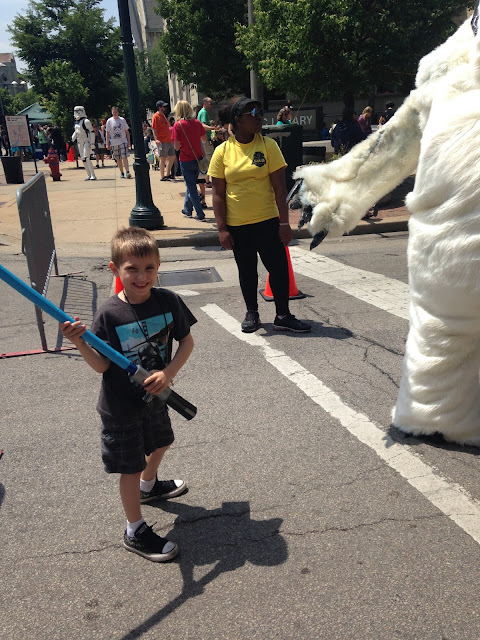 We got to hear some cool tunes from some interesting characters, as well. 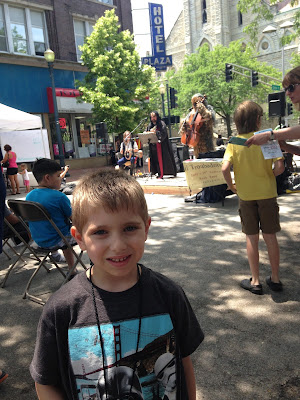 Note the large wookie gentleman playing the guitar on the stage behind Nick. 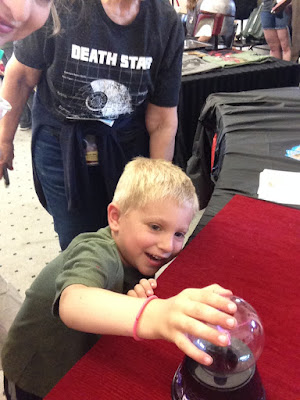 I'd call it a fun day, although all of us (myself included) needed a nap afterwards! 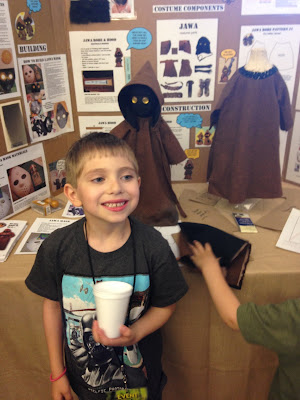 Perhaps the greatest drama of our day was when we went looking for the van and couldn't find it, even when we searched the entire parking garage. Turns out there are two nearly identical-looking parking garages, just a few blocks apart. I suppose we could've used the force then.
Posted by Melissa E. at 6:23 PM No comments:

I can hardly believe it! Henry had his 4th birthday today! He was pretty excited, especially when his daddy let him pick out his own cake. 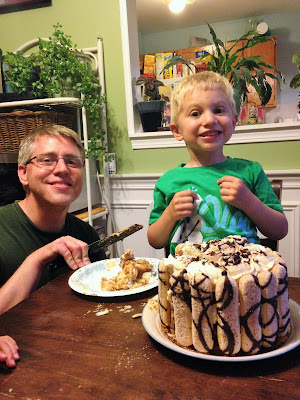 Yup. He picked a tiramisu cake. Nick insisted that it was a frappucino cake, because it tastes just like the frappucinos he likes to steal from me. 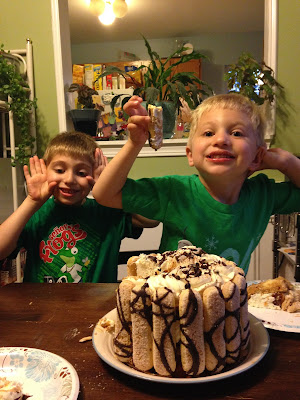 Actually, he wasn't too far off--it does have a nice coffee taste. We let the boys stay up until I got home tonight so we could all celebrate together. 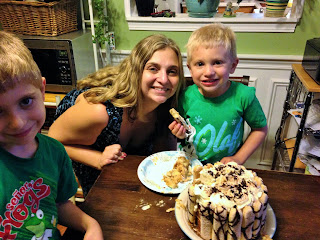 I asked Henry for his feelings about turning four. Here's what he said. . .

After cake, I let the boys do some dancing before bed. Lately, we've been using a site called GoNoodle.com for dancing fun. The boys would do the dances at this site for hours if I let them! Nick's pretty smooth on the trampoline, I think. For a four-year-old, though, Henry has some amazing moves. Both of them want me to sign them up for a hip-hop dance class in the fall.