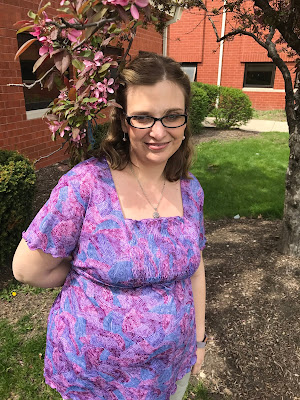 Weeks Pregnant: 17 weeks exactly. I will go for my  next growth ultrasound in Mid-May.
Weight: (From starting weight) +7 pounds. It's hard to keep your weight down when you're taking multiple intramuscular injections of progesterone (as well as estrogen) every day for over three months. I was very happy to have that very last shot a few weeks ago.
Exercise: Since recovering from influenza over my spring break, I've been meeting my goal of walking a minimum of 10,000 steps every day, at least 6 days per week. If it wasn't for the plantar faciitis, I'd probably try to walk even more than that.
Cravings: Baked Potatoes, hamburgers, steak, and all kinds of desserts. I've been indulging in small portions.
Sleep: I was doing better with sleep until my podiatrist said I should sleep with this splint on (see below). It helps a little bit but is terribly uncomfortable.
Mood: I've had a lot of anxiety with this pregnancy. After all I've been through with IVF, I'm very nervous at every little twinge.


Here's a sideways view of my bump. 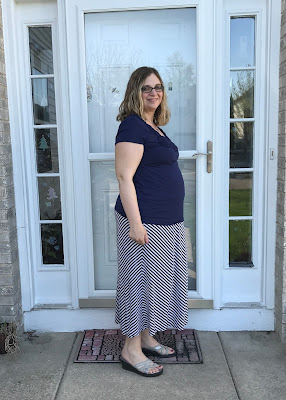 If you're interested in my IVF story, I'm going to tell it here. I know when I was starting out with a fertility doctor, I read the stories of as many real women as I could find. Here is my story.

I think this is likely the most medically-involved pregnancy imaginable this time around. I've known since my early 20s that I have Polycystic Ovarian Syndrome, which can cause infertility and increase the likelihood of miscarriages and chemical pregnancies (both of which I had right before getting pregnant with Henry). Nick was sheer luck--I became pregnant with him literally the first cycle I could ever have gotten pregnant in my life. Henry, who is now almost six, was born with the help of Clomid, which is a pill that often helps with fertility.

When Greg and I decided to try for a third child back in 2014, we tried Clomid for an entire year, in slowly increasing dosages. It never worked. I decided to see an infertility specialist in January of 2015. He recommended IVF, since I could have genetic testing done that could cut the rate of miscarriages significantly. In 2015, when I was 36 and 37 years old, I went through four egg retrieval cycles. Greg and I ended up with 48 embryos, 7 of which made it to the blastocyst stage (5-days). We tested all 7, and only two of them were genetically normal. Both were female. The doctor had been right. If we had opted for IUI or if we hadn't tested the embryos, I likely would've had multiple miscarriages. Now, even though I'll be 39 when I have this baby, the embryo is from my 36 year old self, which I found out does make a difference.

In March of 2016, I went through an implantation cycle. This is where the progesterone and estrogen come in, and while I had plenty of shots during egg retrieval, these shots were intramuscular and far more unpleasant. That embryo failed to implant, and we were disappointed, to say the least. My IVF doctor wanted to try to find out what had gone wrong before trying the other embryo, so I went through what they call a trial cycle. This means you do all of the medications (and yes, all the shots) for an implantation cycle, but instead of putting an embryo in, they take some of your uterine lining on what would've been implantation day and send it to a lab. This test (which was pricey, to say the least), told us that I needed more progesterone and that they should implant a day later than they had the first time.

Another hypothesis my doctor had is that I could have endometriosis. Basically, this is when uterine tissue that usually grows inside the uterus grows outside the uterus and in the abdominal cavity. It can cause a great deal of pain as well as infertility. However, the only way to know if you have endometriosis is to sign up for exploratory surgery. It was a big risk, signing on and basically telling the doctor, "Yes, cut me open and root around in there to see if anything might be wrong." That doctor was right, though. One of my Fallopian tubes was kinked (which he fixed), and I had plenty of endometriosis that he was able to remove.

That was last summer. I was originally supposed to have an implantation cycle in October, but it was postponed when I came up anemic in a blood test. In 2003, I had RNY Gastric Bypass Surgery (more about that experience here), and one of the side effects is an inability to absorb iron. I had anemia in both pregnancies, and it caused growth restriction with Nick. When I was expecting Henry, they actually hooked me up to an IV once a week and just gave me the iron that way.

My doctor had me go to a bariatric surgery center and get evaluated. I saw a surgeon, a nutritionist, an exercise physiologist, and a surgical nurse. I had B12 shots, went to a hematologist, had IV infusions of iron, and was finally cleared in December. That's when I started up on all the shots again. My implantation date was on January 16th. They even gave me a picture of the embryo before they implanted it.


I was shocked when I found out I was pregnant, just a little over a week later. I had been mentally preparing myself for another failure. Besides the utter exhaustion that comes with early pregnancy (and the anxiety, of course), I generally felt okay. I have never suffered from morning sickness, though I've had some taste aversions and general nausea after eating.

After I made it through the first trimester, I've allowed myself to get just a little bit excited. I haven't bought anything yet, though. Not until summertime, at least. I'll have to go a little crazy in August, though, because all of my baby stuff is from 2008 and for a little boy. Good thing I enjoy shopping.

Greg is thrilled to be having a little girl. He is looking forward to a calm, quiet little girl. Let's not destroy his illusions about little girls-he'll find out in time.

Recently, we brought home some special cupcakes for Nick and Henry. Check out their reaction.

We waited quite awhile to tell the boys, and this was the most fun way I could find. I called up Smallcakes in Naperville, and even on short notice, they were able to custom-make these cupcakes for the boys. Nick's cupcake says "Big Brother Again," and Henry's says "Big Brother." Each one really did have pink cream inside. Henry still had the flu in this video, so you can probably tell from his eyes that he wasn't in tip top shape. 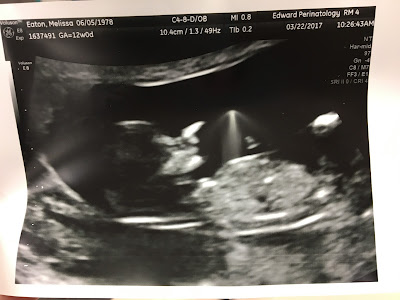 Yes, it's true. I am 14 weeks pregnant today. Now that I've hit the second trimester, I feel a little more comfortable letting people know. Greg and I are expecting a little girl this fall. After three years of fertility treatments, IVF, surgeries, and countless injections, we are very excited. She is healthy and exactly the right size so far, and all of the genetic tests came up normal. Because we did IVF with PGD testing, we knew the sex of the embryo before it was ever implanted, and the blood tests confirmed the gender.

Later this week, I will do a pregnancy update with more of the details. When I was pregnant with Henry, I did monthly pregnancy updates. These may or may not be of interest to anyone else, but I sure find them helpful to remember an important time in my life.

Nick is absolutely thrilled to be having a sister, and he greets my belly every morning with a pat and a, "Hi, Sister!" Henry isn't quite sure what to think yet. I think the reality hasn't set in yet. He asked me the other day, "Are you sure there's a sister in there?"
Posted by Melissa E. at 7:53 PM No comments: