A Gardening Adventure, or "No eating leaves!" 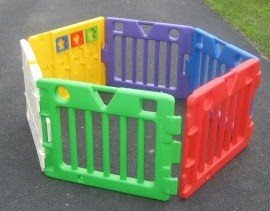 This morning I took Nick out to Lockport to buy him a baby cage. Okay, it's not really a baby cage, just an "infant enclosure," but that's what Greg called it. Nick is rolling and scooting slightly now, and the time has come when he has to be occasionally corralled. I found this one on napervilleyardsales.com for only $20. Now I just have to find extra panels to make it bigger. I want my Nick to have an extravagant baby cage. Tomorrow I may go to a few garage sales to hunt down some new toys for him. Nothing but the best for my baby. :)

Anyhow, on the way there I noticed a set of greenhouses with big "Clearance" and "Sale" signs. One said "50% off everything," so I decided that I'd go on the way back home. The man in charge told me that all vegetables and herbs were either $.50 or $1 depending on size. Is it cheating if I put in plants that are mostly already grown? 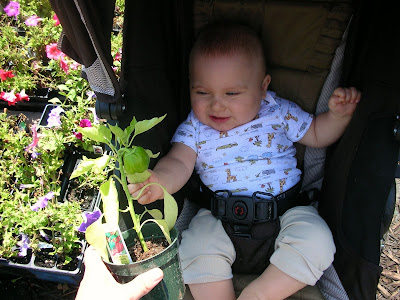 Nick loved looking at all of the flowers. He somehow grabbed a leaf when I wasn't looking, and I had to pry it out of his mouth. Then he helped me pick out some good looking sweet peppers. He would've eaten the baby pepper, too, if I hadn't grabbed it right away.

Next year I'll use seeds and make a bigger garden and all that, but for now, it's nice that I could add some veggies to my garden for such a good price. I was tempted by a lot of the flowers, too, but I didn't get any because I feel like you don't get your money's worth with annuals. They die after one summer and that's it. 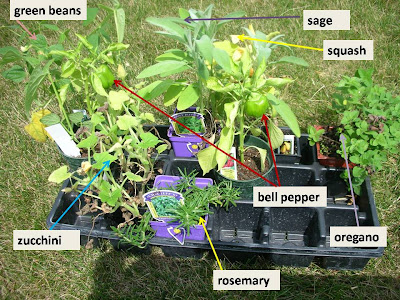 Here are the plants I bought today. And the grand total? . . . (drumroll, please) $6.50! So I figure that even if they all die, I'm out less money than I spend on peppers alone at Costco every few weeks. I often spend $2 or $3 at the grocery store for fresh herbs, so even if I screw up and only get one or two uses out of the herbs, I'm still saving money. 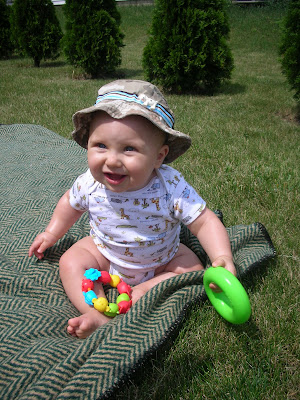 I put Nicholas in his hat and a TON of sunscreen, so that he could watch me plant my new purchases. He took a special interest in my gardening tools, so maybe there's a hobby in there for him in a few years. But sitting next to me was not so good for the plants. He kept trying to eat them, so I moved his blanket a few feet away.

"But Mommy," he seems to be saying, "It's more fun to play with your toys." Thus the reason for my yard sale visits tomorrow. I figure if I get him some fun used toys, I can rotate the toys around every few days and he'll think that they're new. Because no matter what Nick wants, he cannot play with my rake. Not for a few more years, at least. 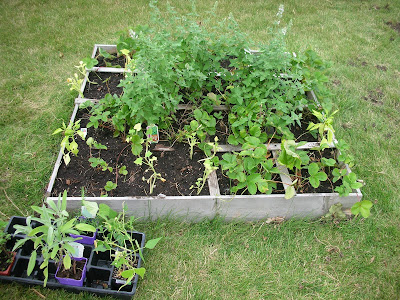 I ended up working in the garden for several hours, through Nick's entire afternoon nap. I picked out all of the intruding grass, cut back the catnip, and made room for veggies. Once I'd planted them, I realized I had nowhere to put the herbs. Next year I want to expand my raised bed garden, but now there's not enough room. Here's what the garden looks like now. The nasturium (plant that Trina gave me) is behind the catnip, so you can't see it, but I swear it's still living. 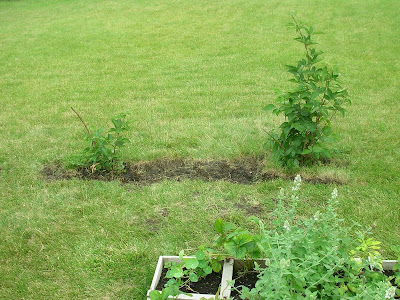 I had to find somewhere to plant the herbs, and I had planned out giving my raspberry plants more room anyway, so I started digging out the grass around them. As you can tell, I didn't get very far. Digging through grass and tilling soil is harder than it looks. Boy, did I get a workout!

Planting the herbs will have to wait until my muscles recover and I buy some dirt. I think that they'll do okay in between the raspberries for now because it's a full sun location. I will put in some really good soil, too. I don't need to go to the YMCA, I can just grab a shovel and dig up some soil.
Posted by Melissa E. at 5:38 PM