Cooking with my Little Helper and Chicken Avocado Fajitas

I had a little helper with me in the kitchen today. Nicholas sat on the floor and played while I was cooking. I need to get him a little chef's hat.

I was surprised at how amused Nick was by simply sitting on the floor and watching me. Lately he is very interested in simple items that aren't even toys. Things such as measuring cups, tupperware, spatulas, colanders, and especially my car keys have become items of intense baby desire. That's not including the Ritz crackers he's been demanding. It's funny how he will yell really loudly until I give him a cracker, and then it is absolutely silent as he tries to stuff the whole thing in his mouth. I don't blame him. Ritz crackers are awesome. On a side note, I wish they still made Garlic Butter Ritz. Those were so good, and I miss them.

Here you can see Nick helping me to measure the salt. He laughed hysterically when I turned on the food processor to grate the carrots. 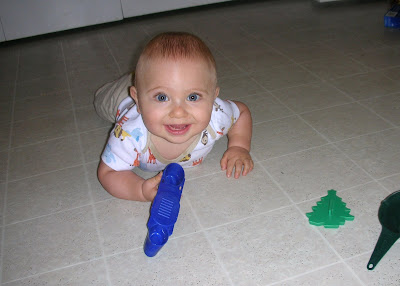 I made Pumpkin Carrot Chocolate Chip Muffins. I got the recipe from a friend of mine from Iowa. They turned out really well! I'll include the link to her recipe, if you'd like to check it out. http://gardenmom29.blogspot.com/2009/06/pumpkin-carrot-chocolate-chip-muffins.html The only changes I made were to change the flour to 1/2 cup of all purpose flour and 3/4 cup of whole wheat. Oh, and I doubled the cinnamon, because you can never have two much cinnamon. Nick really loved these muffins! It's kind of neat that I can feed him little bites of things now. He reacts with such interest and joy, too. It's as if he's saying, "What, for me? What is this wonderful soft and sweet treat?" Then he opens his mouth for more, just like a baby bird. (Only, I'd never put worms in there.) 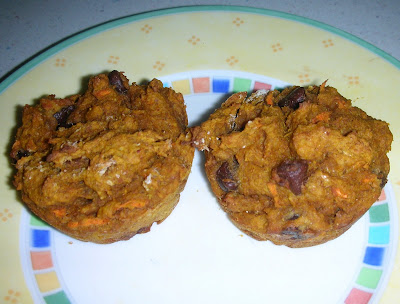 He's been scooting around on his butt lately. Not the same as crawling, but he can move maybe a foot or two like this. He really can move! When I picked him up, I actually had to wash his little baby feet. He had scooted so much on his outer ankles that he had ritz cracker pieces all over them. Nick can support his whole body weight on the outer part of his feet. When he gets excited, he can lift his whole body with those ankles. 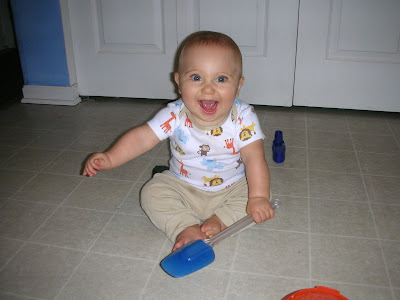 Here Nicholas is banging a spatula up and down. He ended up whopping himself in the face, but he didn't cry, just laughed really loudly.


I screwed up big time this morning. I usually tutor up in Naperville from 8-10 a.m., and Greg watches Nick and then delivers him to me and we do the baby switch. That's fine, except I forgot to take the car seat out of my car before I left this morning. I can't believe I did something so silly! The problem is that Nicholas weighs more than 19 lbs., and he's way too big to pick up in the car seat. So I usually just take him out of it and move the seat later. The other issue is that we only have a two car garage, so when both cars are pulled in, there's not enough room to get the carseat in and out between the cars. That's no excuse, though. Poor Greg had to go in late to work because me, although I'm sure Nick appreciated the extra Daddy time.

Nick really misses his Daddy. When Greg got home yesterday, he held Nick for a little while, then handed him back to me so he could check his email. Nick got really upset and kept shouting and flipping backwards towards Greg. He would grab on to his arms and hold on really tight. Finally Greg had to stop and hold him, and when he picked up the baby, he started giggling and shrieking with joy. It's good that he loves his Daddy so much. :)
I'm going to share one of my favorite weeknight dinners with you. This one is relatively healthy and always delicious. It makes enough to feed about 4, and there's a ton of fiber in the tortillas. 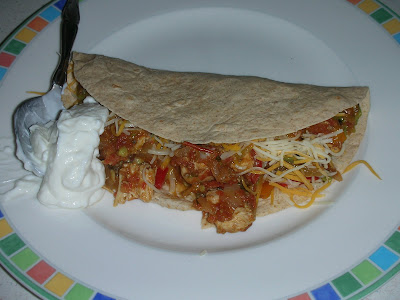 3 T Extra Virgin Olive Oil
1 large Vidalia Onion, cut into thin slices
4-6 cloves of garlic, pressed or sliced very thin
2 boneless, skinless chicken breasts, cut into thin pieces
a little salt and pepper, to taste
2 bell peppers, sliced (I like to use one yellow and one red, for color)
1 1/2 cups of chunky salsa (try to get one with a little cilantro in it)
2 ripe avocados, thinly sliced
chopped fresh spinach (1/2 cup? or whatever you'd like)
1/4 cup chopped fresh cilantro (I omit this if there's cilantro in the salsa)
8 whole wheat tortillas (I like the ones that have 8 grams of fiber)
shredded cheese
sour cream
sliced lime for garnish

Meanwhile, heat a frying pan and start getting the whole wheat tortillas hot. Each person can make their own. I usually serve this meal with black beans.

I will leave you with one last picture of Nicholas sitting on the kitchen floor. I think he looks kind of like a baby ninja in this one, what with the way he's holding the spatula and all. He looks very serious. 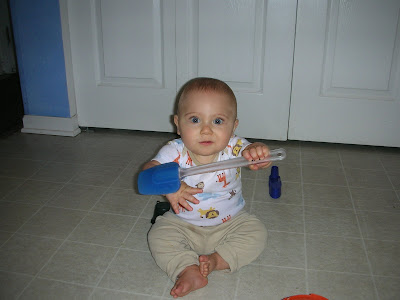