The French Market and Madeleines for Nicholas

Today we went to the French Market in Lisle with my mom and stepdad. It ended up being a great experience. When Greg and I were in Paris last year for our honeymoon, one of the things we liked was walking down to the street markets. You could buy anything, fresh, right there on the street. We bought fruit, pastries, and delicious cheeses from the vendors and happily ate it in our hotel. We were hoping that the Lisle French Market would have the same ambiance, and it definitely did, at least to some degree. Let's compare markets. The one on top is the Lisle French Market, and the one on the bottom is a street market in the Latin Quarter in Paris. 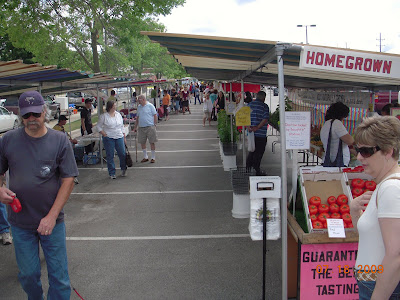 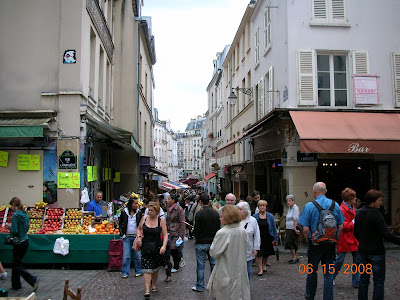 Well, first of all, the Lisle market is set up on a parking lot, and the one in France had stalls set up outside little shops with a pretty paved walkway in between. The view was a lot better on those pretty little narrow streets than it is on a parking lot near the Lisle train station. The market in France was much bigger, spanning several blocks. Both markets, though, had fresh, locally grown fruits and vegetables that were absolutely delicious. I was especially impressed with the spinach and the zucchini. The prices were higher in Lisle, actually, even considering that the dollar was low when we were in France. I guess that must be an American thing. Cheap cheeseburgers, expensive peaches and squash.

In Paris, I wasn't offered any samples, but in Lisle, every booth had samples. That's one point for the Lisle market. I'm a sucker for samples; I often end up buying once I've tasted. My tongue gets the better of my wallet, if you know what I mean. After sampling this fruity strawberry white tea, for example, I had to buy myself a glass. On the other hand, in Paris, they did have really cheap wine for sale, and there was nothing like that in Lisle. I should tell the Lisle French Market that they'd get more customers if they sold excellent wine for $3. ;)

Now in Lisle, people were dressed pretty casually. Shorts, t-shirts, and flip flops were the norm. Quite the opposite was the case in Paris. I saw very few people in shorts and t-shirts, and most people over the age of about 30 seemed to wear slacks and blouses or nice dresses.

In Paris, everyone spoke French but it wasn't too hard to make myself understood, even though I confuse my French and Spanish sometimes. At the Lisle French Market, only one stall had a French speaker. It was the bakery booth run by this nice nun, and she spoke with a charming accent. When we'd first come in, we saw that she had some wonderful pan au chocolate. Unfortunately, by the time we came up her row, they were gone. :( My mom asked about them, and the nun answered her (in French) by saying, "Oh, everyone likes those. We're out." Another booth did sell some scrumptious French bread, but the guy there certainly wasn't speaking French.

Thus, Paris wins on location, prices, ambiance, and variety. However, the Lisle Market is a pretty darned good subsititute, considering I can't fly to Paris again for a good long time. Plus, they have samples, which are always good. So Lisle really wins the contest, if you figure in airfare and the hassle of an 8 hour flight. Here's the website for the Lisle French Market:
http://www.villageoflisle.org/home/index.asp?page=387

Besides a whole stack of produce, I bought this cool little pizza, a loaf of French bread, and two French tarts. This is all that's left. 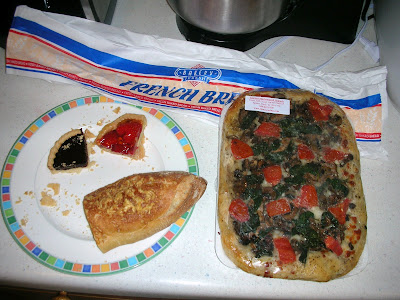 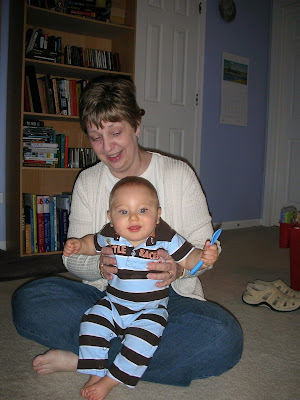 After the French Market, my mom and stepdad came over to spend time with Nick and eat some steak and French goodies. Nicholas is the first grandchild, so he gets lots of loving from his four grandmas, three grandpas, and two great-grandmas. Here you can see my mom bouncing Nick in her lap. He had a thing for that spoon and wouldn't let it go. Nick was also scooting around the floor on his butt for quite awhile. I have no idea how he can make those little ankles move his whole body. I bet it's good exercise, though. 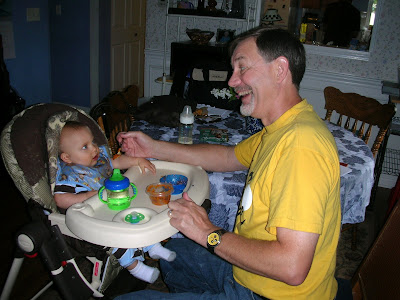 Here you can see my stepfather feeding Nick his lunch. Since Nick didn't have a very long nap, he was very crabby, and his grandpa was trying to coax him to eat without fussing. It worked. I wish I'd gotten a picture of Nick grabbing his grandpa's beard today. He had such a weird look on his face as he grabbed the chin hairs.

My mom bought some orange flavored madeleines from the little nun, and she saved one for Nicholas, which he dearly appreciated. We tried to give him a little pieces, but he ended up stuffing the whole thing in his mouth. He crushed crumbs into the carpet, but he really seemed to like this sweet little cake. 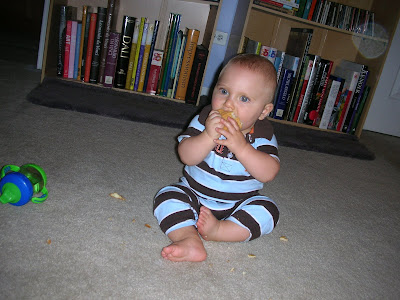 Then he drank some water out of my glass. He hasn't figured out the sippy cup yet.

Now, lest you think that I am giving my child horrible eating habits, please understand that I do not feed him French pastries every day. He eats lots of healthy foods. In fact, just today, this child also ate homemade organic baby food, including broccoli and potatoes, green beans, blueberries, brown rice cereal, sweet potatoes, lentils, and a mixture of applesauce and apricots, and a Ritz cracker. Oh, and three bottles of formula, too. I guess I just want Nick to enjoy lots of different kinds of foods, and it is fun to see his reactions to them. Mon petit enfant. Although I guess he's not so petit anymore!