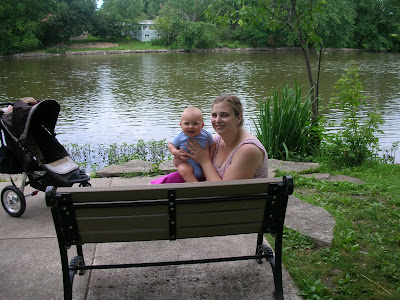 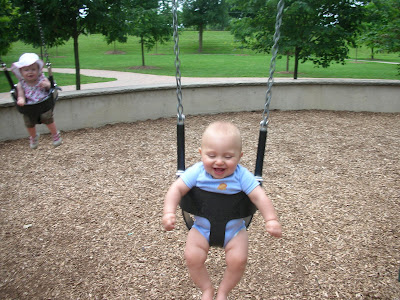 Today Greg and I went to the Farmers' Market in Oswego and to a beautiful park down by the Fox River. It was beautiful, and the weather was just perfect. Not too hot, not too cold--you don't get many days like this in July.
Nick loved the swings. He laughs so hard when he gets to go swinging. Here you can see him happily enjoying himself while an older baby surreptitiously checks him out. This little chic was extremely interested in my Nicholas. I guess I'd better get used to little girls checking him out.

The park we went to had a great view of the river, a bridge, and slides and climbie things that Nick will love in a year or so. There was even a misting station if you started feeling too warm. Here's Greg and Nick down by the path. Notice how he's sitting forward all the way in his stroller. Today was the first time I saw him do that. He kept leaning forward so he wouldn't miss anything. Nick is just happy to be there. Anywhere, actually. He seems to see each new place we go as a new adventure, even if it's a bathroom in a bar or a place to buy tomatoes. I wish I could get a shot of that kind of joy. 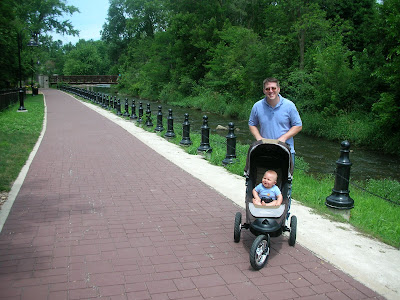 Below you can see Nick enjoying his very first doughnut. At the farmers' market, there was an older couple making fresh batches of mini doughnuts with cinnamon sugar. They made them right there in front of us, and boy did they smell good. We decided that Nick was old enough to try his first doughnut, so we bought a bag of 6 for $1.75. First I gave him a little taste, and then you can see what Nick did. He grabbed a huge chunk out of my hand and stuffed it in his mouth. Boy, was I surprised. He ate the whole darned thing, too. He got cinnamon sugar all over his little toes, and made the happiest "mmm" sounds. It's kind of neat when he has first tastes of new things. Nicholas seems to like things such as steamed peas and avocado just as much as doughnut or tiramisu. I guess the world is an adventure when everything is new. 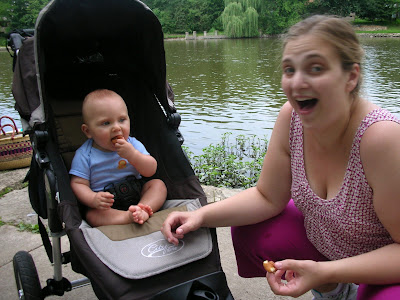 I'm now going to make a rant about the town of Oswego, or whoever built this memorial. See if you can figure out what is wrong. . . I did a double take when I found it. 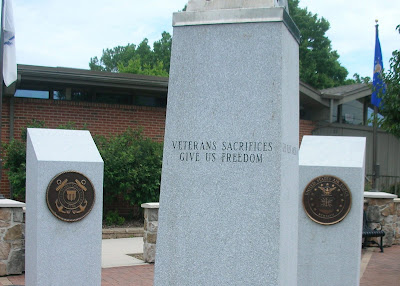 That's right, there is no apostrophe for "Veterans' Sacrifices." Now, I'm all for monuments, and I'm especially all for veterans, but can't they at least own their sacrifices? Stuff like this really makes me steamed. I just finished reading a book called Eats, Shoots & Leaves by Lynne Truss. She has the same issue I do with grammar. Every time I see a mistake, I feel the need to get out my red pen. I don't, usually, but I still feel a surge of rage. I'm an extremely tolerant, liberal, live-and-let-live kind of gal, except for grammatical situations. Since I work with non-native speakers of English, I'm pretty tolerant of them, because they have an excuse. However, couldn't the guy doing the carving get a proofreader before carving something into stone for posterity?!
Okay, I'm done ranting. Sorry about that. Time to put the baby to bed and perhaps plant some herbs.
Posted by Melissa E. at 5:38 PM