Raspberries, a Birthday Party, and Roller Skating Babies (Not Mine)

Many people would be discouraged that it is raining in July. No sunshine in sight. But I am pleased because I don't have to water today. I've been watering my raspberries all the time, in the hopes that I might actually get some this year. Raspberries, that is. I'm a lover of plants that give you something useful. But I have three raspberry plants and they don't seem to be getting much bigger or spreading.

The first two raspberry plants came from a super expensive nursery during the first summer I lived here (2007?). They were exactly the same size then as they are now. They have made it through drought, an entire summer of no watering, and being stomped on by kids cutting through my backyard. My raspberries did not catch fire from any of the fireworks set off by my various law-breaking neighbors, either. So they are alive, but not yet bearing fruit. 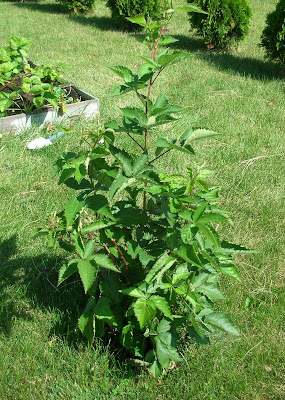 The third one (below) was planted this May--it was a gift from my husband for my first mother's day. This plant looks better than the other two, which is crazy. But it's also a different kind of raspberry. It has to be, because the leaves look different. Great gift on Greg's part, though. I believe he was trying to make up for the $40 apiece blueberry bushes he destroyed a few years back. It wasn't really his fault. He had been trying to cut down our plants for the winter, and he asked me how far to cut. So I went around the front of the house and told him how to deal with each plant. For the rosebushes and peonies, I told him to cut all the way down. I didn't realize he was going to go all around the house and cut everything down. To the dirt. I actually cried when I found out. I've been on the lookout for new blueberry bushes, but it's probably too late for this year. Maybe next year. 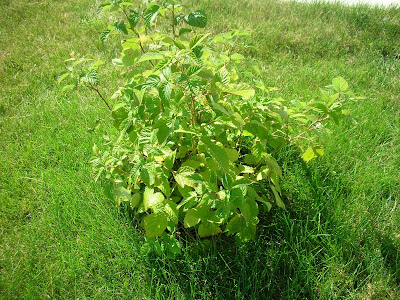 Onward to the birthday party. Yesterday was my dad's birthday, so we went out to Rosemont. I baked a cake and everything.But Nick was clearly the star attraction. Funny how babies do that. Right now, as I am typing, Nick has scooted backwards towards the couch and is trying to suck on my toes as he yells. Not sure why. I don't think he's upset, just trying out his voice. This first picture is Nick sitting with his Grandpa. Happy Birthday Grandpa Mike! 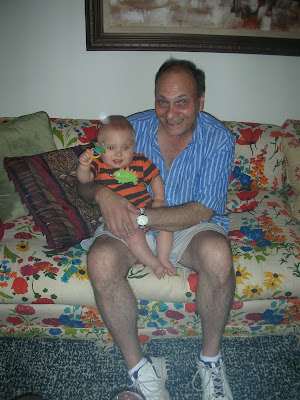 Nick had a fun time playing with Auntie Mandy. She even rocked him to sleep later on when it was bedtime. 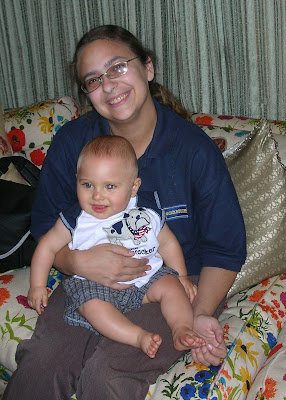 "Mr. Firecracker" sitting with Grandpa Mike and Grandma Patty. He has that big grin because he suspects he might get some cake. 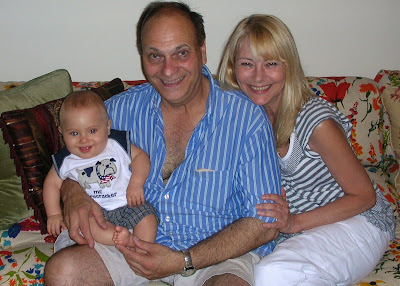 Nick seems a little confused by all of the smoke. Grandma Patty bought trick candles! Nick's eyes got really big when he saw the sparkles--I think he liked them. Plus, he did get to try a little frosting from my finger. After the first taste, he opened his mouth wide like a little bird. I'd be surprised if he wasn't a chocolate lover. Greg and I are both connoisseurs of fine chocolate. 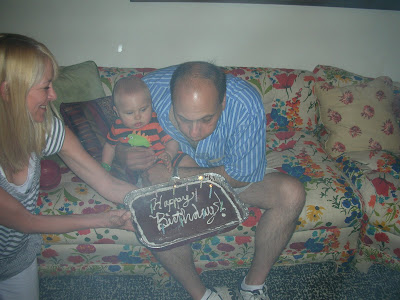 All in all, it was a pretty good day. Nick loved the bright colors at Patty's house. She has lots of cool paintings and (as you can see) her couch has a fun floral print. I think Nick enjoyed the colors and all of the things to look at.
Now on the roller skating babies. I'm going to post this link because I thought it was the cutest thing ever. It's an Evian commercial, and while I'm not a proponent of bottled water, I'm all for cute videos of babies on roller skates. Enjoy.
http://www.dailymail.co.uk/news/article-1198287/Roller-skating-baby-Evian-advert-proves-internet-sensation-4-million-viewers.html
Posted by Melissa E. at 7:35 PM