I have a complicated relationship with food. As a child, I fed my vegetables to the dog and was ecstatic when I got my mom to buy me chocolate fudge pop tarts. While in college, I subsisted on lucky charms and spaghetti with butter and Parmesan. When I go on vacation, I remember the food more than anything I've seen. (Ahh, to taste the gambas al ajillo, tetilla cheese, and sangria in Spain again. . .) I would love to eat dessert with every meal, especially if there's chocolate involved. In fact, when I was in Paris for my honeymoon, I did. The French really know how to indulge. Here you can see Greg and me at a cafe in France. I have no idea where we were or what else we did that day, but I know for sure that we had just finished eating this awesome Tomato Mozzarella salad (drizzled with an amazing olive oil) that was so good we returned to that same cafe. I know that they had Earl Grey tea and really soft bread. 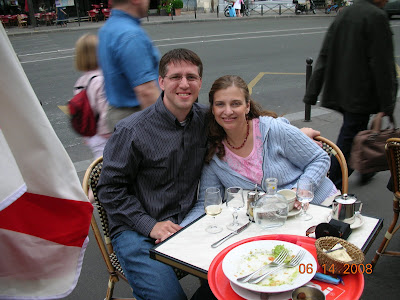 I just asked Greg about the picture, and, sure enough, he remembers it exactly. He says that was the day we went to Notre Dame, and that this cafe is in the Latin Quarter, just south of our hotel. He even remembers that this was afternoon, right after we'd taken a little nap. It's funny how different memories can be. He can picture the map of Paris in his head, but I can still taste that yummy meal. Pardon my digression. Anyway, food is one of the great joys of my life.

But about six years ago, I had Gastric Bypass Surgery (Open Roux-en-Y) and I had to change my eating habits. In order to stay healthy and avoid an upset stomach, I have to eat healthy. I try my best to make my food delicious, too. Now I eat a high protein, low glycemic index diet, and I keep forcing myself to like new foods. There are about thirty different fruits, vegetables, and beans that I wouldn't have touched six years ago but now eat all the time. I had to teach myself to like healthy food, and it didn't come easily. I still struggle with eating healthy, and the most successful strategy for me has been to buy and cook the most delicious healthy food I can find. For example, I hate traditional salads because I won't eat lettuce of any kind, but I found a compromise. I like very tender spinach, so I've started eating salads all the time, so long as they're made with spinach.

I've been visiting farmers' markets lately, since there are so many around here. I've actually been really impressed by what we've been eating. It's amazing how fresh the produce tastes. I'm not so idealistic to think that I won't still buy fruits and veggies off season when I have to, but I figure that for the summer I can get the freshest local stuff possible. On Sunday we went to the Oswego Farmers' Market, and I filled the stroller with wonderful tastes. 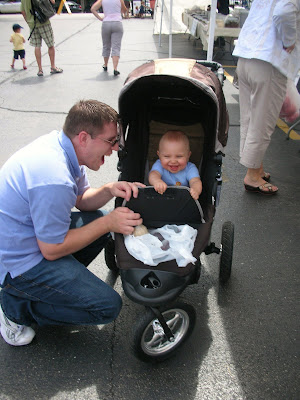 Here you can see Nick helping to load the stroller. Nick met the cutest little dog while I was shopping, and Greg let Nick pet him. Unfortunately for the dog, Nick decided to grab the poor thing's head quite hard. He's started grabbing and pinching lately, and it really hurts! I'm not sure how to stop that, since he thinks it's funny.
Probably my favorite purchase from the farmers' market was the pumpkin butter. It is delicious on a warm slice of honey molasses wheat bread with just a touch of butter. I love apple butter, and pumpkin butter is just as good. With all of the homemade bread I've been making lately, we go through a lot of jam.
We ended up buying quite a few things, as you can see from the picture. There were actually four peaches, but two got squished and thus made into baby food for Nick. I've been able to make almost all of his baby food lately, and he really loved these peaches. They're already gone. I also forgot to take a picture of the best broccoli I've ever had in my life. It was $2 for a huge bag, and it almost felt wrong to get that much pleasure out of eating broccoli. I believe it was around $35 for everything. Not too bad, considering how good it all was. Below you can see Sunday's purchases. 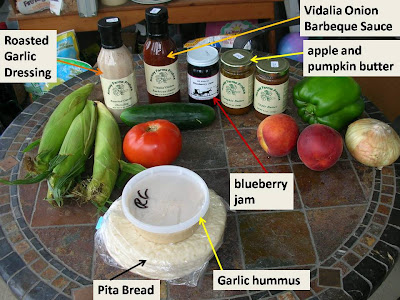 Then, today I noticed a farmers' market on the south end of Naperville, by Route 59 and 103rd Street. I decided to stop in, and I ended up buying blueberries, cherries, spinach, green beans, more tomatoes, cute little asparagus, a red pepper, and a few eggplants. One of my challenges to myself is to try foods that I don't usually eat, like eggplant. We're going to try eggplant Parmesan later this week. I didn't take a picture of today's purchases, because of a crabby baby.

There was also a guy selling cheeses from right over the border in Wisconsin. I bought some soft baby swiss and some garlic cheese curds, which sounded too interesting to miss. They turned out to be pretty yummy. I think I spent something like $23 today. Oh, and the problem with my grocery list today? Nick ate it, so I had to purchase from memory. I guess he took it when I wasn't paying attention. Everyone around me thought it was hilarious as I was trying to pry it from his enthusiastic little fingers. "The baby ate your list? That's so cute!," I was told. It might be cute (and yes, I did laugh), but it made it very hard not to forget anything.

Anyway, I did have a point. Tonight I made a salad that was the best I've ever tasted. It contained vegetables all from the farmers' market, and was so good I actually ate every single bite and would've had more, if there had been any left. I used the fresh spinach, cucumber, tomato, red pepper, a little bit of freshly ground pepper, and some crumbles of goat cheese. When I was eating this salad, I felt the same way I do when eating a filet mignon or some grilled calamari. For me, food is one of life's greatest pleasures, and I guess I can enjoy the healthy stuff just as much as a chocolate ganache cake with a cream filling. Or pretty close, anyway.
Posted by Melissa E. at 9:21 PM