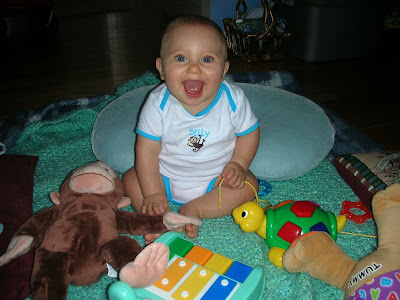 Nicholas had a great day today. I wish that I had half of his energy and enthusiasm for life. I went to a bridal shower for a coworker, and it was really well put together. They had this awesome chocolate fountain with strawberries and scrumptious cream puffs and pretzels to dip. Not the kind of food I should be eating, but still delicious. I wish I'd brought Nick, though. I get kind of awkward in situations where I don't know anyone. As a child, I was extremely shy and unsure in social situations, and every once in awhile that same sense of fear hits me in a crowd. But Nick is a great icebreaker. He flirts with anyone, is always smiling and making noises, and is generally the life of the party. At least as much as a 7 month old can be. It's neat how he already has a complete personality. He already has fans--the bride was disappointed that he didn't come. I wonder if personality is fluid, or if he'll always be this friendly and engaging. It's kind of funny, because neither Greg nor I is extremely social. Not sure where he got that from.

This summer, I've been tutoring for the ACT and SAT, and we're doing lots of vocabulary study. I like tutoring because the kids are (usually) motivated, interested, and they genuinely listen to me. So I see awesome results. I try to give quick images, synonyms, or references that make it simple for students to learn a lot of words very quickly. Vocabulary has always been one of my areas of strength. In fact, one of my time-wasting hobbies is a site called www.freerice.com, where you can test your vocabulary. Every time you get a word right, 10 grains of rice are donated to the UN World Food Program. (I've sort of embraced my nerdiness of late.) But some of the words on the SAT prep are pretty unfathomable. I'm ashamed to say that I was even unsure of about 10% of the words. For example, I keep forgetting the difference between abjure and adjure. Sigh.

One of the words one of my students was struggling to learn is ebullient, which (according to Webster) means "overflowing with fervor, enthusiasm, or excitement; high spirited." Now this, of course, is a word that I already knew, but I used Nick as a perfect example of someone demonstrating ebullience. My student laughed when I demonstrated Nick's excited flappiness. Check out this video and you'll see exactly what I mean:

I'm not quite sure what he was so excited about. I know that right before that, he had the hiccups, and he was really mad. I sat him next to me on the couch (with my foot up in case he started to fall) and he realized that he could bounce on the springy cushions. So he did, and the simple fact of bouncing up and down brought him more joy than I get when given dark chocolate or goat cheese. If we could only bottle that kind of ebullience. . .