Today was a crazy day, but a nice one. I started out by grinding some cherries for Nick's breakfast. He really loved the cherries with oatmeal! I love dark red cherries in season, but they make a huge mess. Nick sure didn't mind, though. I probably ended up eating just as many as Nick, but cherries are very healthy, so that's okay. 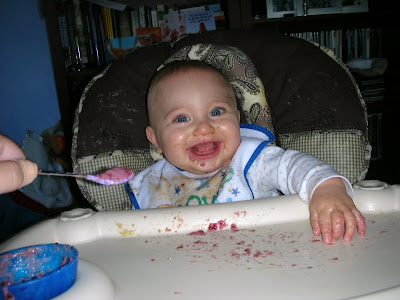 Greg and I took him to the water park at our YMCA this afternoon. He absolutely loves the water, and he spent the time kicking, splashing, and grinning really big. We need to get him a baby pool out back. His froggy kick (that he tries to crawl with) is perfect for in the water.

While he was down for his nap, I did some watering and a little weeding. I've been working on the front of my house. When we bought it, the previous owner had all of these wildflowers planted on either side of the driveway. Over the years, I've taken out some of the ones that were too invasive or ugly, and added in some more perennials. I love the perennials because they require very little work, and they make our house look nice and bright. 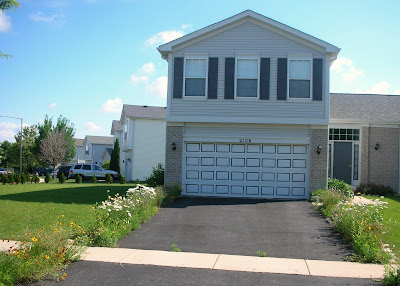 The lamb's ear are the ones with the purpley flowers. They are very soft to touch, and they are spreading quite a bit. I don't really mind, though, because I think they're pretty. I believe the yellow flowers are coreopsis, and they are growing like mad this year, despite my despicable lack of attention. 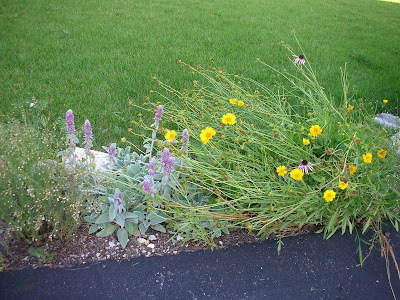 The catmint in the middle of this picture is a plant I really love. I bought it at a nursery a few years back, and it has tripled in size. The purple flowers last all summer long. When my friend (an avid gardener) visited me from Iowa last month, she told me these plants need more room. So Greg and I will have a big task--moving the rocks about a foot out so that these plants have room to spread out. The first year I was here I used mulch, but I haven't bothered the last two years, and I think the driveway area looks pretty good, considering how little I've done with it. I believe all I've done this year is kill maybe 10 of those giant, nasty stickerweeds. I suppose that's the benefit of growing perennial wildflowers. To some people, they are weeds, so they grow easily and spread by themselves. 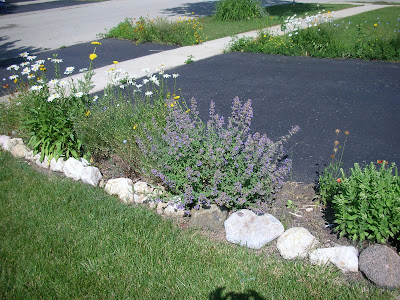 My absolute favorite flower in my whole yard is this pale blue one in the middle of the picture below. I have no idea what it is called, but it has a long green stem, and one little flower pops out each day, then wilts. I love the color, and I wish I could figure out what it is called so that I can put it in a few other places. 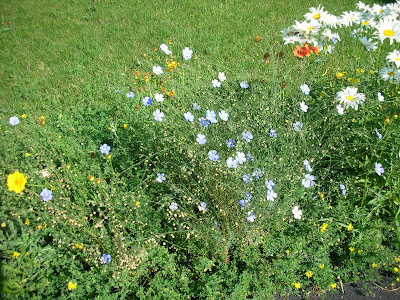 Overall, I'm pretty pleased with the way the front of the house looks. I love the fact that I can walk outside and pick a vase full of flowers, and these beds look like I never picked a single bloom. My goal for next week is to cut back some of the more invasive flowers to give my favorites more room. We'll see if I get to that. Since having Nick, I'm discovering that my procrastination is far worse than it used to be.

Tonight Greg and I were highly amused at Nick's developing language skills. Last week I read Finding our Tongues, by Dean Falk, which is about the evolutionary aspect of language and how it developed in humans over time. I use amazon.com to figure out books that I think I'll like, and then I check them out of the library. That's what brought me to what I'm reading now: Proust and the Squid, by Maryanne Wolf. It's a mixture of linguistics, evolution, reading education theory, and brain development. I absolutely love this book! It is like this book was made for me: an ELL teacher (who had to take linguistics in grad school) who teaches reading all day and actually reads evolutionary science texts and history books for fun. Yes, I'm a nerd, but I don't care anymore. I am going to revel in my nerdiness.

It's especially neat to be reading the Maryanne Wolf book at this time as a mother. It makes these great connections to language development in history, and to infant and toddler speech development. One important prerequisite to reading is hearing the patterns of stories and poems, and that's why kids who are read to have greater language and vocabulary development. Nick especially loves Yum Tummy Tickly, by Karen Baiker, which has a ton of rhymes and neat plays on words. He giggles and grabs at the book every time I read it. In fact, this book gets him so riled up that I usually only read it to him before lunchtime--not at bedtime. According to linguistic principles, he's listening to everything that we say and establishing those neural connections. At least I hope so. Of course, when he actually starts talking, he'll probably only copy the things I say when I slam my finger in the door or get mad at the cat.

I notice now that at 7 1/2 months, Nick makes all kinds of noises, and sometimes they follow the patterns of conversation. Greg likes to make silly noises with Nick, and he's started to copy his daddy. He vibrates his tongue and makes the weirdest noises. It's one of the first steps to learning to talk. Nick can now say ba-ba, da-da, and a wide variety of random noises that he makes at the funniest times. Below is a short video of Nick talking to himself and making some interesting baby noises. I'm trying to use the video camera more, so that I can remember these wonderful times once Nick gets older and less cute.


When I was in the Costco yesterday, waiting in line for samples of cream puffs, Nick decided to start talking to no one in particular. He was laughing and making all kinds of noises, trying to establish eye contact with every lady in the vicinity. (He likes to flirt.) The lady cutting up the cream puffs busted out laughing and said, "That baby just made my day! Take a cream puff for him, too." So I gave him the filling, and he made a noise that sounded very like "mmmm!" Then he kept opening up his mouth like a little bird, because he didn't understand that the cream puff was all gone. I don't blame him--I love the samples at Costco. Guilty secret--I often go there at lunchtime and just eat samples. However, I'm easily convinced to buy the things that I try. For example, after trying samples yesterday, I bought apple gouda chicken sausage, dark red cherries, and this really good cheese.
Posted by Melissa E. at 9:06 PM