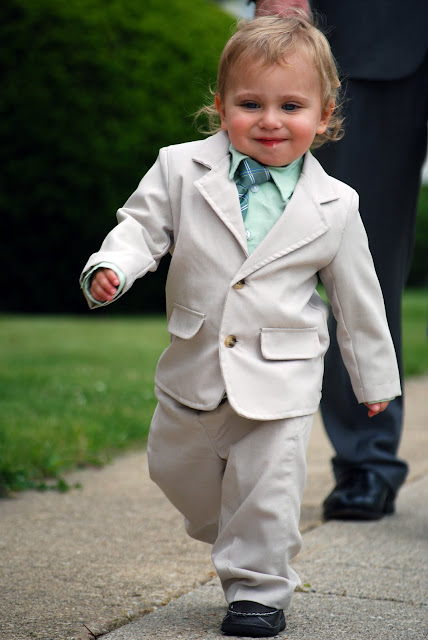 ***Greg and I spent the last three days on the Gold Coast in Downtown Chicago, celebrating our anniversary. Nick spent his time with his Grandma Toni and Aunt Sarah, being spoiled and eating lots of french fries. I'll write more tomorrow about our trip, but for now, enjoy this picture of Nick, all dressed up and struttin' his stuff.  ***


I just love this picture of Nick because he looks so, well, smooth. It's as if he's saying, "Yeah, ladies, I'm here, come on over and talk to me." And they do! This little flirt attracts attention wherever he goes. Today, at the zoo, we were riding the tram around the park, and there were these two little girls sitting in front of us who were simply enchanted with Nick's manly charms. They were getting him to give them high 5s, exclaiming on his curls, and just staring at him. Sigh. They were upset when we got up to get off at our stop. If he stays this cute, he's going to have an interesting adolescence, with all this adoration. I hope his head doesn't get too big.

We had to take him down a peg at dinner, though. Nicholas has the unfortunate habit of throwing his food, and we are not putting up with it anymore! We started this about a week ago, but haven't noticed it working quite yet. Every time he throws his food, we tell him, "No throw food!" and then either Greg or I immediately put him in his pack and play for 2 minutes. We ignore him during this time. Eventually, he will figure out the connection. (I hope!) The key for us is not looking at him while he's in the high chair, because he gives us his puppy dog look and tries to manipulate us. I love that my son is cute, but I don't want him to grow up exploiting his adorableness to get what he wants.

It's funny, but for some reason this picture reminds me of the old shows from the 1970s, where the confident businessman is walking along the street in his leisure suit, winking at the ladies. Nick is clearly strutting his stuff in the picture above, which was taken by my sister, Amanda Wiatr.
Posted by Melissa E. at 10:16 PM