This year, we decided to spend our 4th of July down at the Eyes to the Skies Festival in Lisle, IL. We wanted to go somewhere for the evening this year, after the fiasco of last year, when we stayed home and sat in our living room, listening to all of our neighbors try to blow themselves up. There was actually quite a bit of smoke coming in through the windows, and our side yard was filled with the shrapnel of illegal fireworks. Greg worries about fires, seeing as most of our neighbors were far too drunk to walk straight, let alone light up half sticks of dynamite. Plus, even though our subdivision is right behind the police station, I don't believe the police care. Perhaps they're even among the drunken pyromaniacs. So we went to Lisle for the parade, balloons, and fireworks. Here we are at the parade. 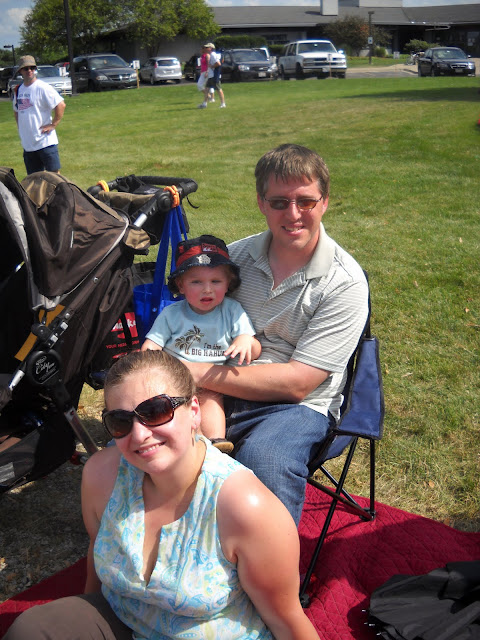 We went with Nick's Grandma Toni, and Nick's two aunties (and some friends) came later. At 3:00, the parade started, and we sat and watched and caught candy. This was Nick's first parade, and I think he liked it, especially the part where people throw candy! The first bummer was the heat. It was easily over 90, and even though we had Nick in a hat, slathered with sunscreen and drinking a ton of water and pedialyte, I think the heat was bothering him. The chewy candies helped, though. Also, they were throwing soaking wet foam balls at everyone, and Nick was extremely excited about that. Notice our pile of candy. 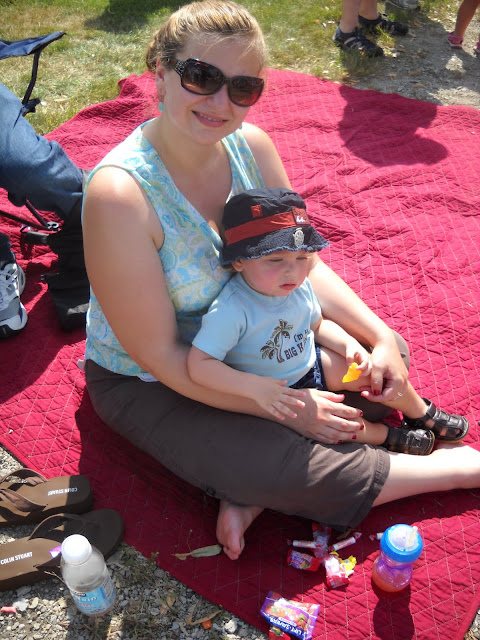 He kept pointing to the big trucks and the people marching and dancing along. These little cars were especially impressive. Nick does say, "car," and occasionally, "vroom," when he sees any sort of vehicle. Even a flying carpet. 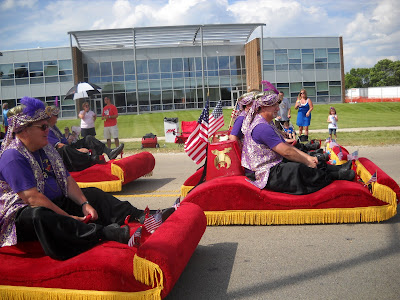 After the parade, we climbed up a large hill to claim a spot for the balloon launch and fireworks. Greg spread out a giant quilt, and our view was marvelous. They had live music all afternoon, so we relaxed. I have to say, though, that climbing up and down that hill while carrying a toddler is quite challenging. So, we listened to music, visited the craft fair, and waited for the hot air balloons. You see, when I take Nick to the grocery store, when he sees a balloon, he jumps up and down in his seat, pointing and grinning and repeating, "Boon!" So I thought that seeing hot air balloons would be the ultimate fun for him. While we waited, Nick did a little dancing. Apparently he liked this song. Check out his moves.


The second bummer came soon after my sister arrived. She told us they had a sign up front saying that the balloon launch had been cancelled due to high winds. I'm kind of glad, in a way, that Nick was too little to be disappointed. (Just knowing how he reacts when I say the word, "Outside" and he has to wait even 30 seconds, I can't imagine what he'd do with this kind of disappointment.) Oh well, at least there would still be fireworks. We would have a spectacular view from the hill. Nick was fascinated by my sister's camera, and kept pushing the review button to look at pictures she'd taken. 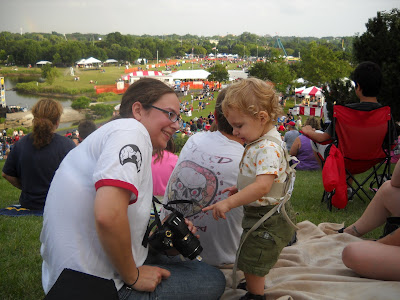 Greg decided to order some cheese fries, and this is what he got: 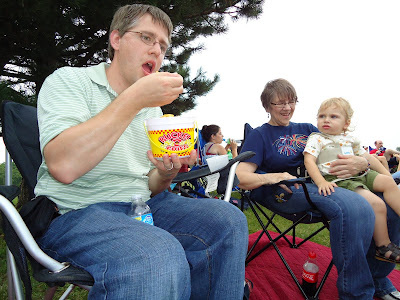 Yeah, it's called "Bucket 'O Fries," and it was as gross as it sounded. Nick sure liked it, though. 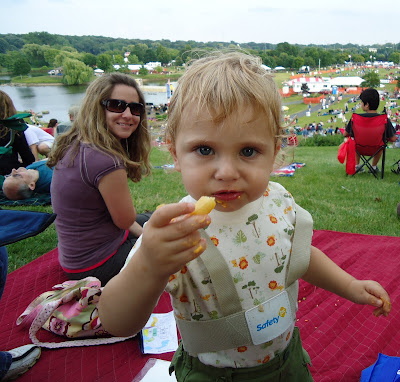 The third and final bummer was the worst. With almost no warning, around 8:00, it started to drizzle. We put Nick into his stroller with the cover, got out the umbrella, and hoped it would pass. Then the skies opened up. It poured for a good twenty minutes, until we were completely soaked and miserable. Except for Nick. He happily sat , relatively dry, giggling and sticking his hands out of the stroller and randomly exclaiming, "Water!" Yes, Nick, water.
That pretty much put a damper on the evening, so we trudged down the hill and gave up. Bummer #4? Four separate fireworks parties were going on when we got home, one of which was right outside our house, in front of Nick's window, in fact. Until after midnight, many, many booms were heard. Oh, well, better luck next year. I hope your 4th of July was drier than mine.  : )
***I'll continue writing about my Chicago trip tomorrow. I just wanted to show the pictures from the 4th today, when the fun (and the misery) is still fresh in my mind.***
Posted by Melissa E. at 11:20 PM