An Afternoon of Onomatopoeia at the Zoo 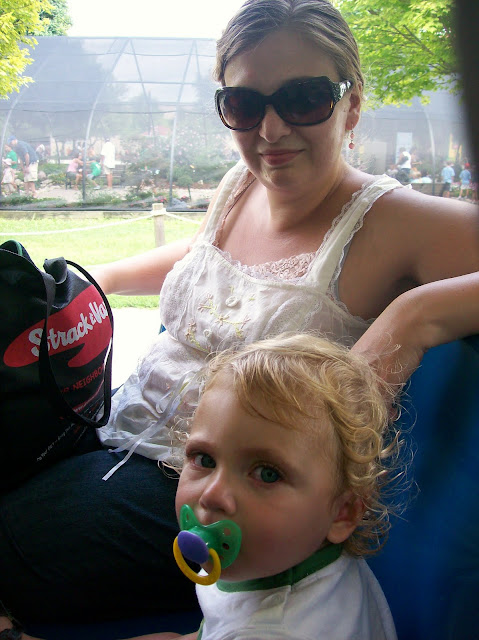 Tuesday, after summer school, Nick and I went with my friend Gardenmom and her son to Brookfield Zoo on a very hot and humid day. Gardenmom did a post about our visit too, if click here. Nick was having tummy trouble and nap issues, but I think he enjoyed himself anyway. The afternoon did not start out well, and Nick screamed more than he was quiet. Note his expression of toddler attitude and the binky in his mouth. He usually isn't allowed to have the bink unless it's naptime, but this week Nick was such a crab I broke the rules so he wouldn't drive us completely insane. 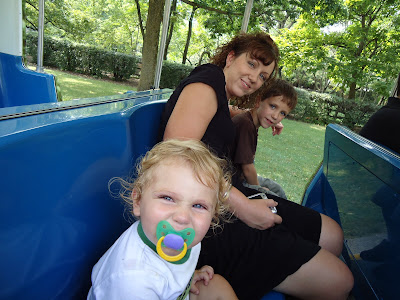 After a leisurely tour around the zoo on the tram, which Nick called the "Choo-Choo," (Close enough. Hey, he's only 1.) we checked out the Australia house and the camels. That's where the onomatopoeia comes in. Lately, Nick has been trying to learn the names and sounds of different animals. He has a tiny stuffed zebra he likes to carry around, and he calls it "Moo." Usually, I'd correct him, but heck, I don't know what sound a zebra makes. Predictably, Nick said "Moo," for the zebras and for these camels he was pointing at so eagerly. 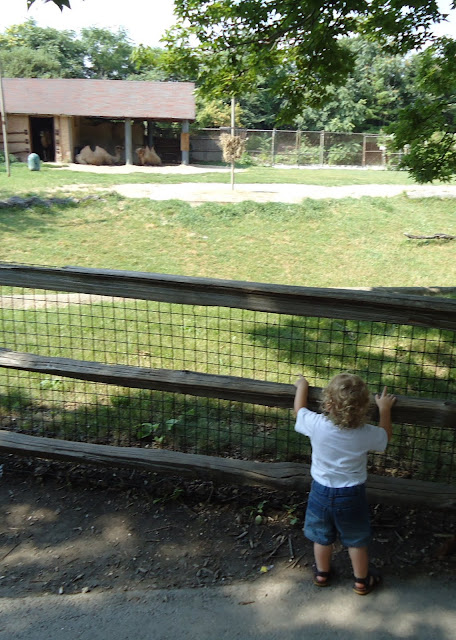 Nick saw the elephants and immediately started stomping his feet. In one of his favorite books, Wacky Wild Peekaboo, by Tim Bugbird, the elephant makes a stomping noise. Nick has done that everytime he's seen a real or fake elephant since last winter. When Nick got to the giraffes, he just wasn't sure what to think. We don't know what sound a giraffe makes, but the one in his story says, "Munch, Munch, Munch," as he's eating leaves from the treetops. Nick just looked, mesmerized, at these huge animals. They were beautiful. 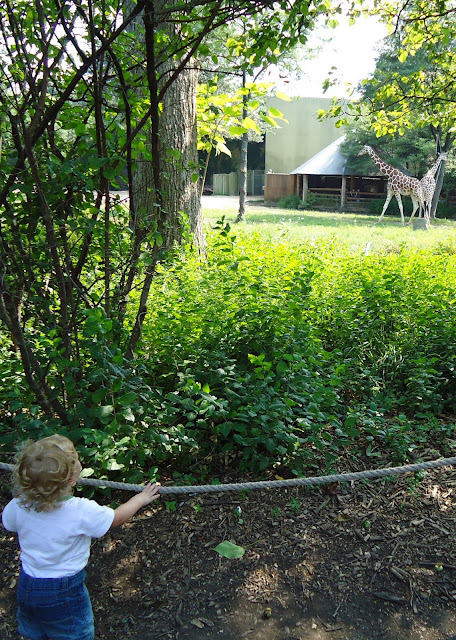 We went in to my favorite exhibit, The Living Coast, to see the fish and the penguins and the arctic birds. If you've never been to this exhibit, you should totally see it. There's this neat wave that goes overhead every 30 seconds, and you can feel the salt spray on your face and look straight into the glass. It makes me jump everytime. I even got some video. First, I took video standing in front of the wave area, looking up at the glass blocking the wave. Here is what the wave looks like:
I also took video of Nick's reaction to the wave. This video is from his 2nd or 3rd time seeing the wave, and he was really liking it by that point. He wanted to see it "Again! More Water!" My boy really loves the water. One of these days I'm going to have to take him to a real beach.
Nick liked the birds flying overhead in the penguin exhibit and kept pointing up and saying, "Birdie!" and "Tweet!" At one point he looked like he might be trying to waddle like a penguin, but he might've just been dancing with excitement. He was truly stoked to see the flying birds and the penguins, too. 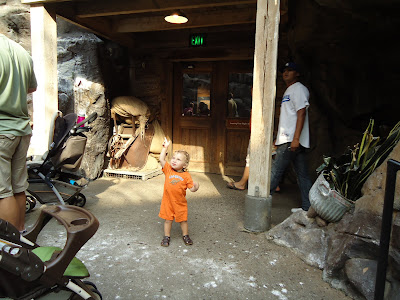 This penguin was a total ham and was showing off for all of us. 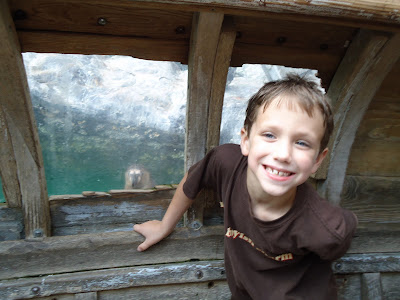 See him in the window of the fake boat?
He was pressing himself right up against the glass and when Gardenmom's son moved his finger, this gregarious bird would move his beak back and forth. The penguin even posed for this picture. My friend said that it was like this penguin was telling his buddies, "Hey, man, look at all of these crazy people. They're coming right up to the glass." It was kind of like we were the exhibit, and the entertainment for the penguins. The animals were very active during this day, and I saw more animals up close than I usually do at Brookfield. We saw a polar bear totally hamming it up for the crowd. He was playing in the water and you could totally see his cute polar bear toes kicking around. I didn't get a picture of that, but Nick was able to easily recognize a "bear!" 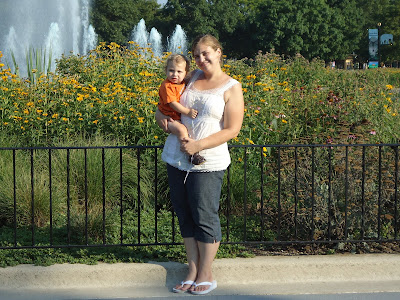