Fruits, Vegetables, and a Cream Puff WAY Too Big for a Little Man

Nearly every weekend, we take Nick to a farmers' market to get fresh fruits and vegetables, and whatever else we can find. The Downers Grove market is one we explored recently, and it is one of the bigger markets, with tons of vendors. Only four or five were actually selling produce, but there were lots of booths selling other edible stuff, like muffins from a gluten-free bakery. Nick has no allergies (that we know of), but he loved the samples muffins, and insisted on having one. Here you can see Nick deliberating over what kind of muffin he'd prefer. "Nana!" he finally announced, and then did not understand why the banana muffin did not magically appear in his hand. "Nana! Mama Nana Nana Na Na," Nick insisted as I paid and then tried to get the wrapper open. 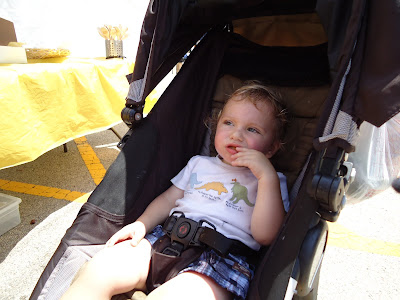 "Mmm. Nana Mmm.," he declared happily as he shoved muffin pieces into his mouth. "Mmmm." We ended up with quite a haul: spinach, asparagus, orange tomatoes, peaches, green beans, free range steaks, and those little multicolored potatoes. Nick loved looking at the dogs and the people, but I think he liked the trains best. He's learned to say "choo-choo" when he sees a train, and since this farmers' market is right by the tracks, he got to see plenty of trains. 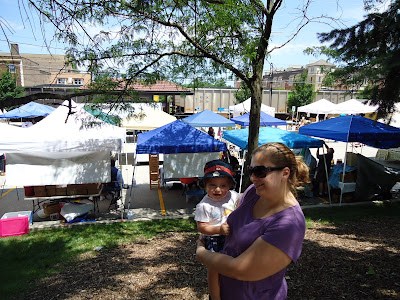 I used to live in Downers Grove, back when Greg and I first met, so it was kind of neat to go back and visit again. We went for lunch at an Irish restaurant called Ballydoyle, and I love the way the place is decorated. I feel bad for the waitresses, though, who have to wear very short plaid skirts. I think, to be fair, they should make their male bartenders and waiters wear equally short skirts. 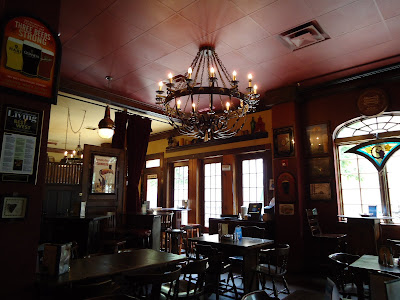 The food was good, too. We had something called a boxty. Greg had one with chicken and spinach, and I had one with steak and vegetables. You can't get more irish than a boxty. It is a fried potato pancake, and inside is your meat, more potatoes, and vegetables. It is served with, get this, a side of mashed potatoes. Yup, potatoes with potatoes inside and a side of potatoes. The boxtys (boxties?) were pretty good, and it gave me a reason to give Greg my lecture on the Irish potato famine. I was a history minor as an undergraduate, and I love it when history comes up in real situations and becomes meaningful rather than just interesting. My husband rolls his eyes at me, but there are far worse hobbies I could have. 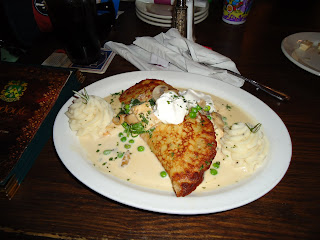 Here's the short version: the potato originates in South America, probably in the Andes mountains, and was taken to Spain in the 1570s. Importantly, only a few varieties of potato (ones with high crop yields) were grown in Europe. When the potato finally caught on as a nutritious staple food, it became often literally the only food eaten by many peasants in Ireland. I read somewhere that you can actually survive on only potatoes and milk, since you can get all of the vitamins necessary from just those two foods. I think it'd be a pretty bland diet, but it kept lots of Irish people alive. In fact, it wasn't uncommon for an Irishman to eat 14 pounds of potatoes in one day! Talk about taking the idea of monoculture to the limit. I wonder how many potatoes were in my boxty? 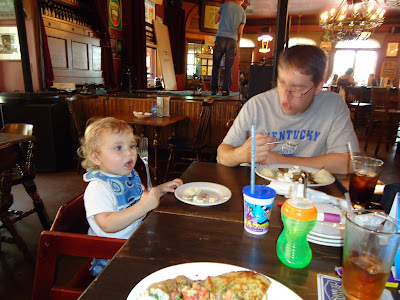 Lots of poor Irish families grew large because the potatoes kept them alive. In fact, the population of Ireland skyrocketed once they started growing this yummy tuber. Problem is, because only a few varieties of potato existed in Ireland, the plant hadn't had any time and diversity to evolve resistance to any kind of fungus. When potato blight (a fungus spread through the air that probably came off of a ship from South America) arrived, it spread across Ireland and killed all of the potatoes. I can't imagine how horrible that must've been for the families. Imagine that you wake up one morning, and your entire crop has turned black. Every potato you dig up has turned into black mush, and your family has nothing else to eat. The government of course, was very laissez-faire, and thus nearly a million people starved to death. All because of monoculture and selfishness.
Anyway, pardon my digression. Do you understand now why the potato is central to the Irish meal? Nick loved the boxty, anyway, but he loved even more what we ordered for dessert: Irish Cream Puffs. While I was trying to take this picture, he snuck his hand in to try to snatch one of them. 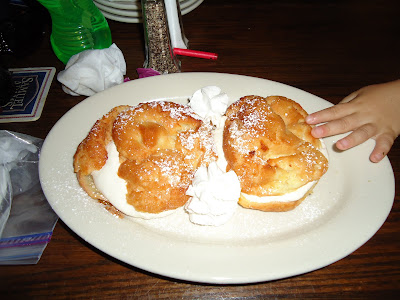 They were delicious and messy and just perfect after a lunch of potatoes with potatoes and a side of potatoes. Our son heartily approved. 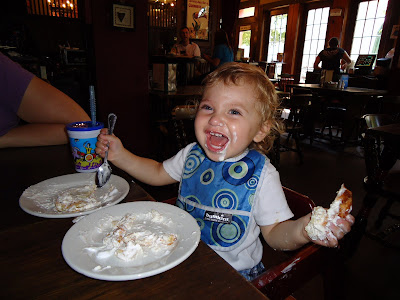