Wednesday night Greg and I walked to one of his favorite restaurants, and Italian place called Carmine's. It's on Rush Street and the food was delicious, if overly plentiful. It was a bit pricy, but the grilled calamari/octopus/shrimp was perfectly cooked, and the lasagna had an amazing sauce. I'd definitely recommend this place, especially if you like classic Italian food. 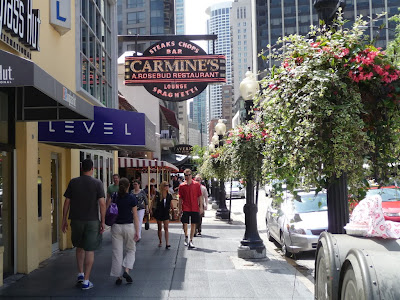 As is often the case, the highlight of my meal was dessert, which was a chocolate mousse cake that just melted in my mouth. I wish I'd saved more room, because this cake was phenomenal. The chocolate just melted in my mouth. It's funny, but ten years from now this trip will be a fuzzy memory, but I do believe I'll remember this cake. That's how my memory works. Our waitress took this picture of us, but unfortunately the cake wasn't in the picture.  ; ) 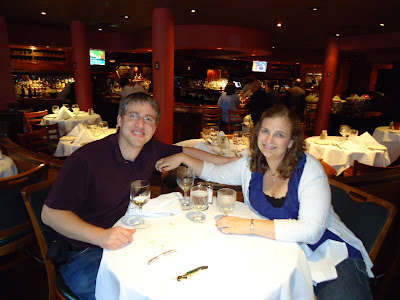 After dinner we walked down to Old Town to see Second City's mainstage performance. I've been a few times, but Greg had never gone to see Second City. The show was called: "Spoiler Alert: Everybody Dies in the End." It was pretty funny, though some skits were better than others. I think my favorite one was about a lady trying to keep squirrels off of her bird feeder. There was a lot of physical comedy, and I loved when the actors pretended to be office supplies, like a stapler, a water fountain, etc. Also, it was so nice to be able to drink and not worry about who was going to drive. I had several mugs of coffee with Bailey's, and that probably made me laugh even more. We weren't allowed to take any pictures at the show, but I had Greg snap this shot of me near one of the Old Town signs. This part of town was not as upscale as the Gold Coast, but there were a lot of neat looking shops and quaint bars and restaurants. I'd like to explore this area again, because even though we were very early, Greg wouldn't let me go into any of the stores. (Deep sigh.) 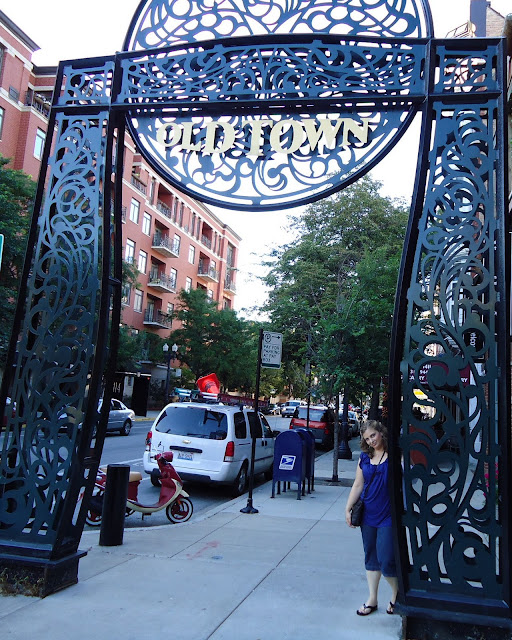 After the show, we decided to walk to the El Station, but discovered (after walking a mile in the opposite direction) that it was closed. By the time we'd walked back to the hotel, we probably worked off all of our dinner and dessert. I was glad I'd worn my comfy flip flops. It was a great evening--it's nice to go on dates with my husband. Evenings like this one take me back five years and make me reminisce back to when Greg and I were first dating. Our first "real" date was on the Gold Coast, in downtown Chicago.
***Flashback*** You know how in a movie, the screen will go all fuzzy for a second so you know there's a flashback? Well, I don't know quite how to do that in a blog, so I'm just going to tell you.  ***Flashback***
Greg and I met online, at Yahoo Personals, to be exact. Both of us were looking for a long term relationship. I was 27, and Greg was 31. We chatted via email for a good month before deciding to meet. Greg was living in Oak Park at the time, and we met at a coffee shop and talked for several hours. While waiting for me to arrive, he was reading a book--"The Wine Bible." That made me giggle, but was kind of a relief after dating guys who wanted to do shots of Jagermeister and chug countless beers. Greg was obviously a little more refined than that, though I was also a little amused by the little earring he wore in one ear. It didn't seem to match with the rest of his personality.
I remember what I was thinking of that first evening. Greg was very polite and gentlemanly. I liked that Greg was older than me, mature, and well-educated (Greg has a Master's Degree in Counseling Psychology from the University of Kentucky). I remember we talked about Europe, because I had been and he'd always wanted to go.  He asked (very politely, I might add), if he could take me out the following Saturday, and I accepted. During the following week, he called me and told me we'd be going downtown for dinner and that I should wear something nice. I was flabbergasted when he showed up in a suit, with a bouquet of flowers. Very nice presentation.
My jaw dropped when I saw where he was taking me--on a horse drawn carriage ride through the city. The funny thing is that the carriage ride took off right by the Water Tower, which is very near where the Whitehall Hotel is located. Our driver even took a picture of us, though it was a Poloroid and has kind of faded. 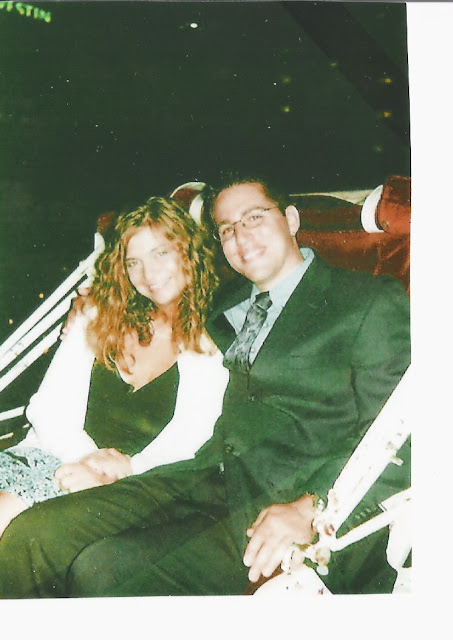 I think Greg wins for most romantic first date ever. He was trying to impress and he did. We even went up to the Signature Room up in the Hancock Building for dinner. Does it make sense now why going downtown reminds me of our first date? One of the secrets to a good marriage, I think, is planning adventures to go on together. Hopefully we'll have lots more adventures this year.
***Flashback over, pardon my digression***
Posted by Melissa E. at 9:46 PM