Have you ever been to the MCA in Chicago? If not, then you should totally go, whether or not you're into modern art. If you're a teacher, like me, you even get in for free. (Nice perk, I know.) The building is very cool, and the museum store is one of the most wondrous places I've ever been. I may need a separate post just for the MCA Store. The views from the MCA windows are extraordinary, too. But what I really like is the irreverent stuff that makes me smile. Like this sign. It's all offical, and looks just as if it were labeling the floors of the building. 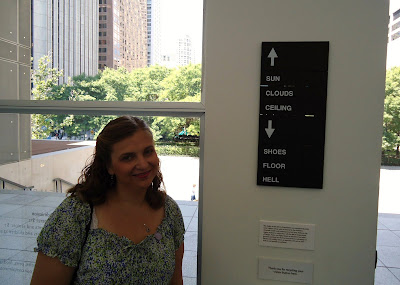 When Greg and I started dating, he used to take me to First Fridays, which is an event at the MCA (on Friday nights, obviously) where you can have a few drinks and check out the latest exhibits. I always found something that appealed to me, and I was even amused by the art that I didn't appreciate/understand/like. Just because a piece of art isn't my cup of tea doesn't mean that it isn't art. I usually have to read the descriptions from the artists to even begin to understand the pieces and their meanings. But something usually strikes my fancy, even if it makes me laugh.

Shall I start with the first display of art I saw on Wednesday? Okay, well, it's a whole room exhibition by one artist guy, and the first thing you see is this, in the middle of the room. 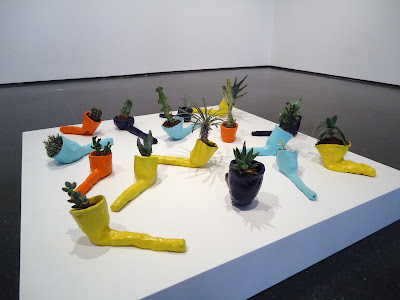 Yes, those are cactuses. They are growing out of what looks like the bowls some of my friends used to smoke marijuana out of in college. Not sure what the connection is, but okay. I was wondering how the cactuses stay alive, what with the lack of sunlight. Perhaps the bright flourescent lighing keeps them alive. Anyhow, the other striking (ahem) part of the exhibit was a tv with an hour long video playing. Performance art, kind of.
But this video was different, because what you see on the screen is the artist himself, lying reclined on a couch in a vaguely Renaissance style pose. Naked. He was lying very still. The funny thing is, if you watched long enough, you would see that every once in awhile he'd reach for a drink of water, blink, or adjust his arm. Frankly, it took me awhile to realize that it was a video and not a picture, because I looked and then immediately looked away. But Greg likes to slowly read every single placard and examine/photograph every single piece of art, so I had a good ten minutes to explore this exhibit. At one point my eyes were going across the tv screen and I saw movement. Then, I was hooked, because I told Greg, "That naked guy moved!" I guess that's the "art" part of it. I had to look, because I wanted to see if he would move again. I suppose that must be the point of his art. He's posed like the beautiful ladies in the typical paintings, only he's not a beautiful voluptuous woman. We've been trained, I suppose, to see naked women as art. But not men. Especially not skinny, hairy men with beards. That's why he did the video. (Does this mean that I now "get" modern art? I'm not sure.) I still don't get the cactuses growing in bowls, though. 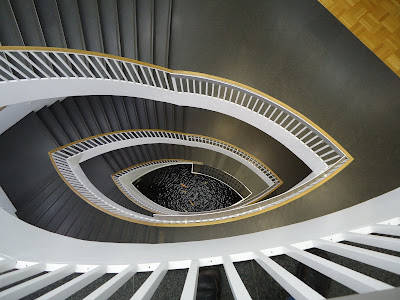 After that room, we went upstairs to see some more exhibits. Aren't the stairs wild? That's a koi pond at the bottom. I liked the Alexander Calder exhibit, especially the kitty mobiles and the face. (The Calder images are copyright protected, so we couldn't take pictures. But click on the link to see some of the works.) It was neat to see the air moving the shapes around. There was also some stuff that was so weird it was actually kind of neat.
I totally do not remember the meaning of this next piece of art, but I liked it because it's so unique. The little pink squares (candies?) look very dubious, as in, "Please don't eat me." Plus, the vintage tupperware is cool. I think my mom and grandma must've had the whole set, so I recognize all the 1970s and 80s pieces. Orange and brown and yellow tupperware--the colors of my childhood. 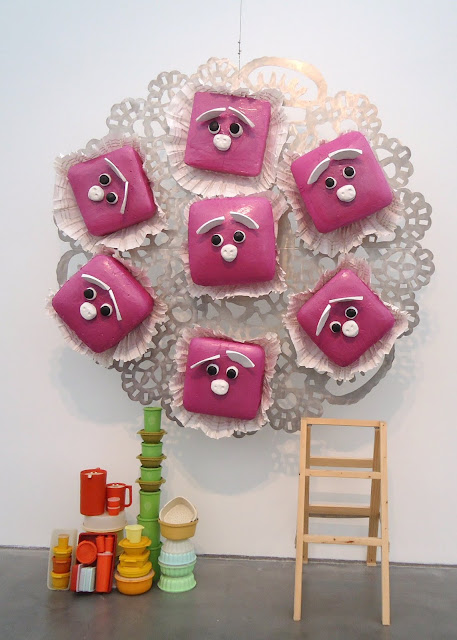 This next piece of art was very, um, large. It hung from the ceiling in the middle of the museum, and I didn't even need the explanation to "get" this piece. The log symbolizes a tree, and the other side (they're perfectly balanced) symbolizes all of the things that the tree becomes, that eventually become garbage. When I did read the explanation, I found out that the artist found all of the wooden pieces on garbage day around the city. Not exactly the kind of art project you'd do in the basement, that's for sure. 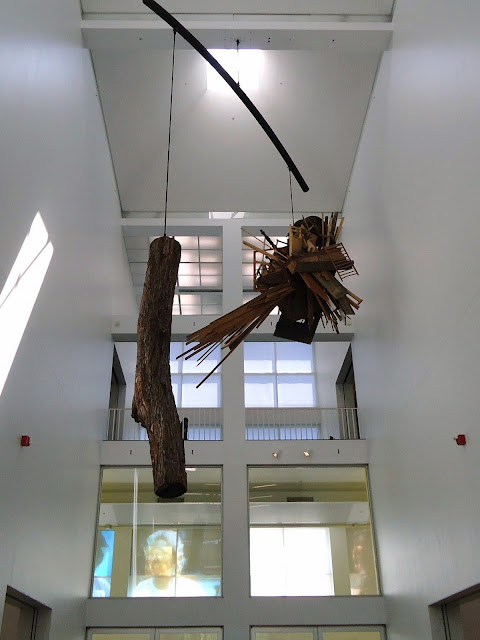 The next piece was interesting because you usually don't see things like ornaments or popcorn in old wheelbarrows. Must've been some party! 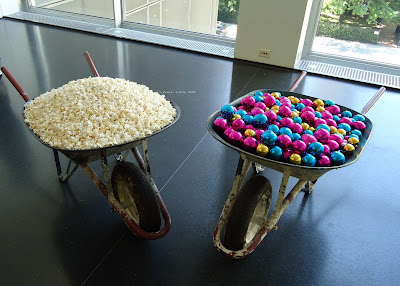 I had some art history and "How to Teach Art" classes when I was an undergraduate, and I've always enjoyed looking at different kinds of art, but I actually am less interested in modern art than Greg. The pieces I've chosen to share with you were the most memorable, for me. I think this museum has plenty to offer, even if you think you're not "into" contemporary art. The views from the floor to ceiling windows are amazing enough to keep you entertained. People watching is always fun, and you can see the lake from here. 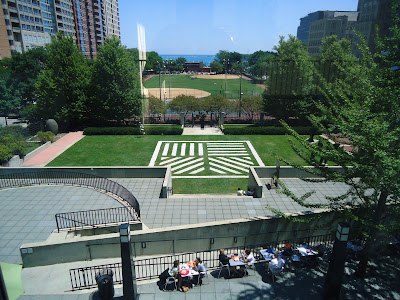 We spent hours at the museum, and I did nap on comfortable benches several times during our visit. But I didn't even once complain or ask to leave. So I thought it was rather unfair that Greg said his back was hurting and we needed to leave after I'd spent only 20 minutes or so in the MCA Store. Of course his back was hurting--he'd spent hours standing and staring at art. But I was a little peeved because I had just discovered the coolest store ever. I did get some pictures, though, and I'll share those in another post.
Posted by Melissa E. at 7:33 PM