Greg and I have been visiting as many different farmers' markets in the area as we can, and we were kind of excited about this one, when we heard about it. The Three French Hens Market is in Morris, IL, and is only held once a month. I found out about it on the Illinois Agriculture Department's webpage.We were excited because all of the markets we've been to thus far have been in suburban areas, whereas Morris is a small town half an hour or so southwest of us, right on the I & M Canal. Our greatest hope was for marvelous produce, and we figured we couldn't lose, since Morris is more rural. More farms=more fresh fruits and vegetables, right? 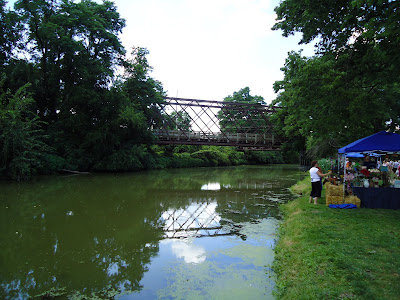 The first thing Nick noticed is that this farmers' market is right on the water. "Water!," he proclaimed excitedly as we walked towards the booths. Not only is this market near the water, it's pretty big, with a ton of tents.  The views were lovely, with trees in the background and flowers all around in the park that this market was held. I think this was the prettiest of all the markets we've been to so far. 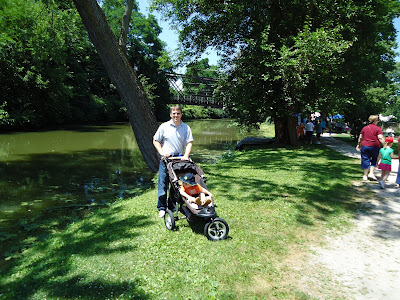 There was only one problem--no produce. There were tons and tons of vendors, selling everything from chocolate to antiques to bibs. However, there were no fruits and vegetables anywhere to be found. At the very end, we did find one vendor selling fruit, but she ran a store that sold fruit baskets, and her fruit was from the same places that the grocery stores get their produce. So no local produce at this farmers' market. 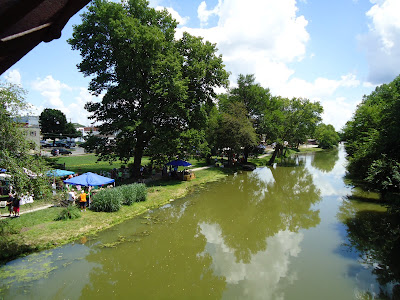 The vendors were mostly crafters and bakers, and Nick was grateful the bakers, because we bought muffins. We found a nice shady bench and sat and ate delicious muffins and people watched. Nick baby-watched, and said hi to every child/baby/toddler he saw. This is the first time I've ever been to a market and not walked away with a bag full of produce. I thought maybe I'd made a mistake, and this really was a craft fair. However, I found this market on the Agriculture page that says, right at the top, "Farmers' Markets." 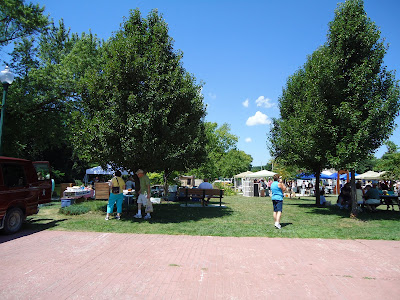 Oh, well. It was a nice little trip anyway, and a beautiful area to walk around. We would've stayed longer, but the heat was starting to get to us, so we decided to walk across the bridge and up the path. On the way we saw one of the canal boats that they had for tourists to see. Nick said, "boat." 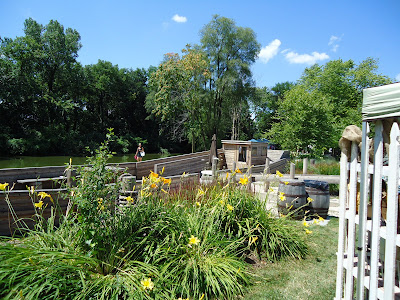 There were trees (shade!) and a nice walking path across what looked like an old railroad bridge. No, I'm not sure why I am making that face in the picture below. I think Greg had said something funny. On a cooler day, Greg said he'd like to come to Morris again to go walking, and I agreed that this was a good spot for a picnic. Just not a good spot to buy fruits and vegetables, apparently. Nick doesn't care either way, so long as he gets his muffin.  : ) 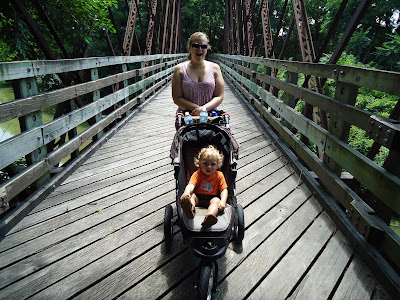