A Toddler with a Voracious Appetite

The last few days, Nick has been hungry constantly. He's even taken to pointing at the kitchen counter and screaming until I can figure out what he wants. Starving and desperate, he is too upset to say the word for what he wants until after he's had a bite. This afternoon it was a ginger cookie. He pointed and screamed and even stomped up and down until I gave him the cookie. Sighing with relief, he munched the whole thing and then said, "Cookie?" and I gave him another one. He really likes those ultrathin ginger cookies that most kids don't like, and they're very thin, so I let him have three.

While Greg was making dinner, Nick saw something on the counter that he wanted. So he screamed and pointed and kicked the cabinets and beat on the refrigerator door. Greg never did figure out what he wanted. When dinner was served, we figured it out. Greg hadn't put any corn on the cob on Nick's plate, because he thought he'd be too little. But Nick kept pointing at my corn and shrieking. I remembered that my mom had given him corn on the cob once and he'd loved it. So I handed over my piece. Immediately, this is what he did: 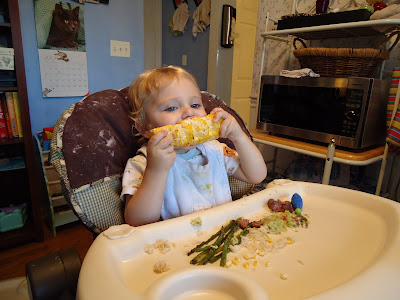 Okay, so apparently he likes corn. He ate nearly all of the corn on his cob, and then he did this: 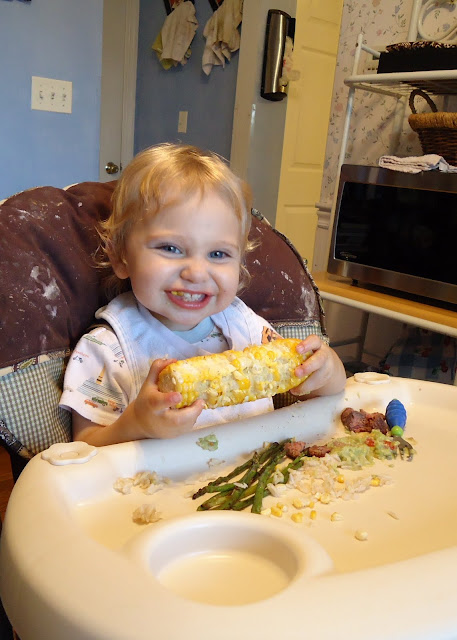 Okay, so we have a new favorite food of the week. Nick did, eventually, eat almost all of the rest of his meal in addition to one and a half corn on the cobs (corns on the cob?). We also taught him to say corn. See if you can hear him say it. He's not saying it exactly correctly, but he totally knows what it means, because he kept pointing to my second piece (he'd already eaten my first) and saying "Cohn."

I've been trying to get him on video talking, but I haven't had a lot of luck with that. For some reason, when the camera comes out, he'll smile but he doesn't say much, which is funny because we've been having actual conversations lately. He's starting to put words together. Like, today we played with the hose in the yard, and I told him we were going to go out and get wet, and he said, "Outside. . . water?" Then, later, he saw our neighbor's cat outside and he said, "Kitty. . . Outside. . . Kitty. . . Mow!" (Mow is what he says for meow. He says it really loud, too, just like what the kitty says when he pulls her tail.)
I know that he's kind of a late talker, and somewhat behind, but I'm very proud of all the words he's learned lately. I think he's making excellent progress.
Here are Nick's words as of today (the ones that I can remember): mama, daddy, no, kitty, ball, water, outside, bath, sleep, night-night, doggy, meow, moo, horse, cookie, cracker, milk, corn, binky, car, vroom, hair, nose, mouth, ears, upstairs, up, down, close, door, hot, balloon, broom, potty, diaper, cheese, please, bye-bye, hello, all done. That's 40 words. Not too shabby.  : ) 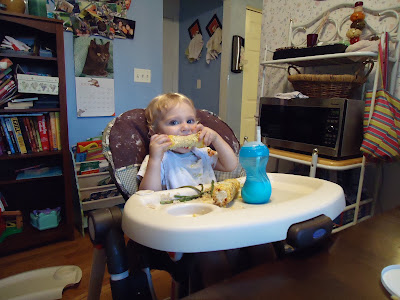