After two years of being married, I finally feel, well, married. You see, I finally have tan lines on my left ring finger. I just noticed them when I took my rings off last night. I guess this means I'm really married.  ; ) 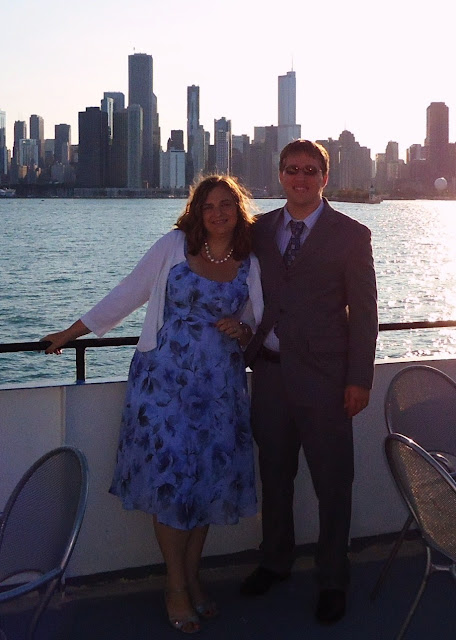 Seriously, though, Greg and I have done pretty well for two years of marriage. One of the ways we stay sane is to go on dates as often as we can, just the two of us. So, to celebrate our second anniversary, we planned a trip to Downtown Chicago. Nick stayed with his Aunt Sarah and Grandma Toni (Thank you!), and Sarah took us to the Metra Station so that we wouldn't have to pay for parking. We stayed for two nights and three days (Tuesday-Thursday), and we just got back last night. I'm going to have to talk about this trip in several posts, because we did so many things while in the city. Greg only gets twelve days off every year (that's vacation and sick days combined), so he wanted to make the most of his time off, and we did a lot.

We stayed in a boutique hotel on the Gold Coast right across from the Hancock Building. It's called The Whitehall Hotel, and it is in a really old building with tiny elevators. It was a pretty good place to stay, especially considering the price. When I first went to price hotels, we were disappointed and thought we wouldn't be able to stay downtown, because hotel rooms are incredibly expensive in the summertime. We're talking $130-$200 a night, on average. However, when I checked out Hotwire, I found a listing for a boutique, 4-star hotel on the Gold Coast for $98 a night. I didn't find out the name of the hotel until after I'd paid, but I wasn't disappointed. The room was a "Superior King," and was very nicely decorated. The only thing we didn't like is that they put us on a smoking floor, so the hallway was kind of stinky. But our room was great, and we had a terrific view.

Speaking of great deals, I got an amazing one on a dinner cruise using Groupon. We paid $40 each for a two hour dinner cruise on a boat called Mystic Blue. We boarded at 6 p.m. and returned at 8:30 p.m. When I called to book our tickets, I was told that dress was formal. So Greg wore his suit and I put on a nice dress and heels. When we stood in line to get on the boat, though, I was surprised to see what the definition of "formal" is for some people. Besides the staff, I think Greg was the only guy there in a suit. Men wore polo shirts and shorts or jeans with sandals, women wore jean skirts and flip flops. Honestly, more people were wearing shorts and sneakers than slacks and dresses. Oh well, I suppose it was better to be overdressed than underdressed. 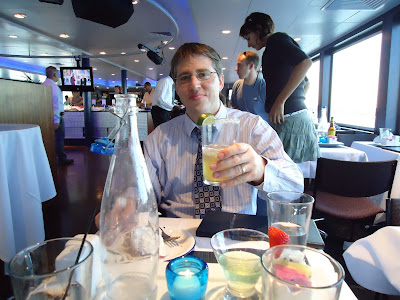 The food was plentiful and well-made; I think my favorites were an Aloha Beef dish and a potato filled with scallops and shrimp. Since neither of us had to drive, Greg drank margaritas and I had an appletini. The view from our table was gorgeous, and there was a huge spread for dessert, with fondue and everything. 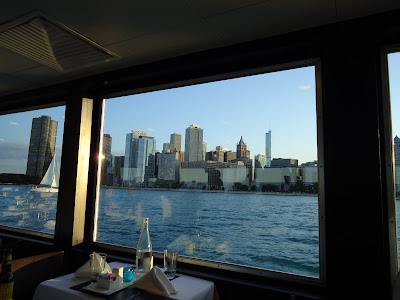 The waitress even brought us out a special dessert for our anniversary. It was a delicious cheesecake, and it tasted even better after my appletini. 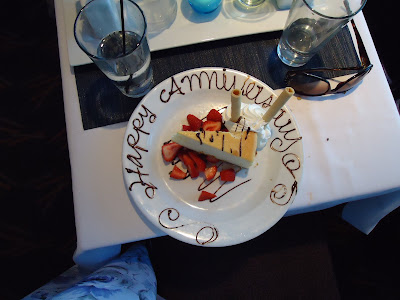 We spent most of our cruise up on the deck, though, because we wanted to take in the fresh air and the dazzling skyline. The splendid views of Chicago, after all, were the whole reason for the cruise. 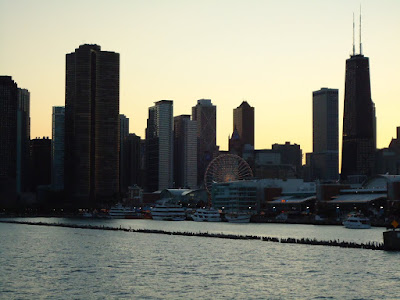 It was relaxing, to say the least, sitting up on the deck, listening to a live guitar player and watching the sun slowly set behind the buildings. I would have to say that this was probably the most romantic part of our trip. 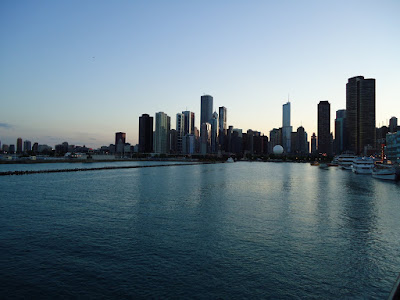 After the cruise, we walked along Navy Pier and drank coffee and took pictures. We stayed up until midnight and walked all the way back to the hotel. I brought flip flops in my purse just in case my feet started to hurt, and oh, boy, was I glad I had done that! 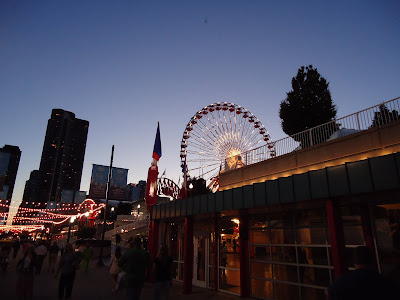 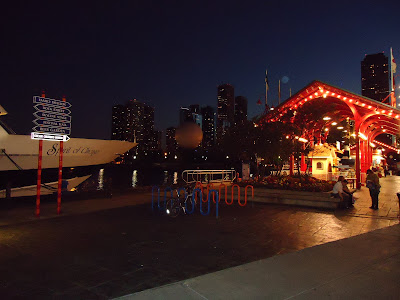