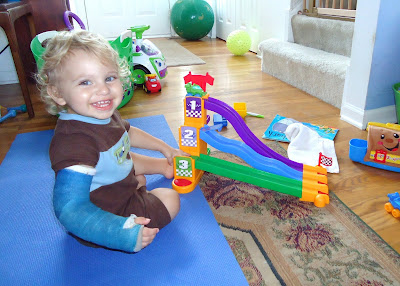 This afternoon with Nick was pretty fun. First, Nick did a pilates workout with me (that's my mat he's sitting on). Nick hasn't yet mastered the pilates stance, but he sure tried to copy me as I was doing my routine. Nick liked the one where I stretch my leg over my head the best. He liked it so much he sat on my tummy while I was doing it. Nick also pointed and laughed, both at me and at the ladies in my Pilates Bodyband DVD. I'm just proud of myself for actually doing a workout. I think I need to do them immediately when I get home, before my rear end hits the couch. 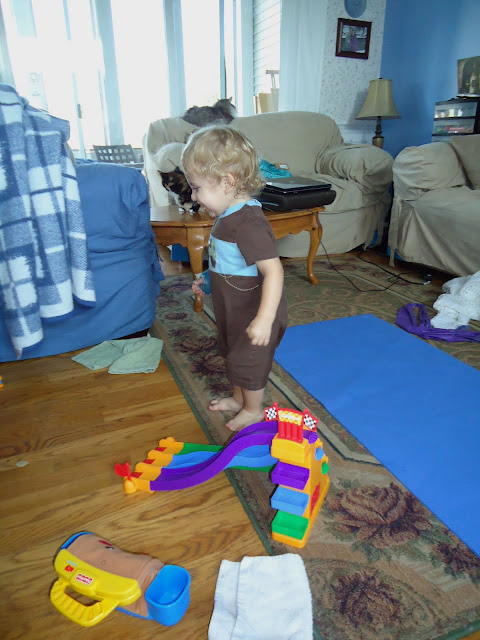 Oh, and you can also see our new couches in the picture above. They look silly because of the slipcovers and the foam that Greg and I used to cover up the arms. We don't want the kitties to scratch our nice new furniture, so we resorted to drastic measures and put foamboard underneath the slipcovers under each arm. We'll see if it works. So far, our kitties have only used the couches for napping. (fingers crossed) You can see Sebastian on the top of the couch in the background and Molly watching the cars go by on the cocktail table. 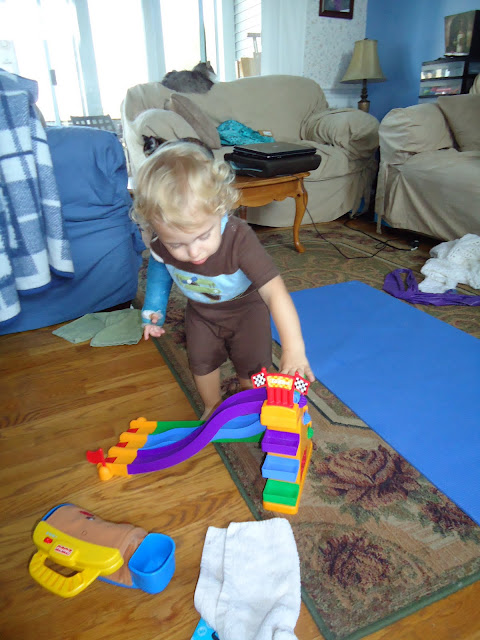 After pilates, Nick and I played cars for a good 45 minutes. You would be surprised at how many times this little boy can make his car go down the little ramp while narrating. "Car! Car up!" and then "Buttton," and "Car down." If the car went under the couch, he'd ask me, "Where car?" and then, when he found it, he'd say, "There it is!" (He says that all as one word, but he uses it correctly.) Sometimes he'd say, "Vroom!," and other times, when he'd make his car sail down the ramp while still in his hand, he would announce, "Whee!," just like when he goes down the slide.