Man, kids are expensive. Nick and I had to make a trip to Babies R Us on Thursday. You see, Nick is a very active little boy, and he has managed to ruin and/or destroy some of his stuff. He ripped the pad on his changing table, so that all of the stuffing was coming out and the plastic was gone. That's $30 right there for a new one. I guess the diaper pail refills aren't Nick's fault, but I had to buy two packages at $16 each. Definitely necessary. But I suppose the cost is offset by his cute little shoes, which I got on ebay for $1.50. 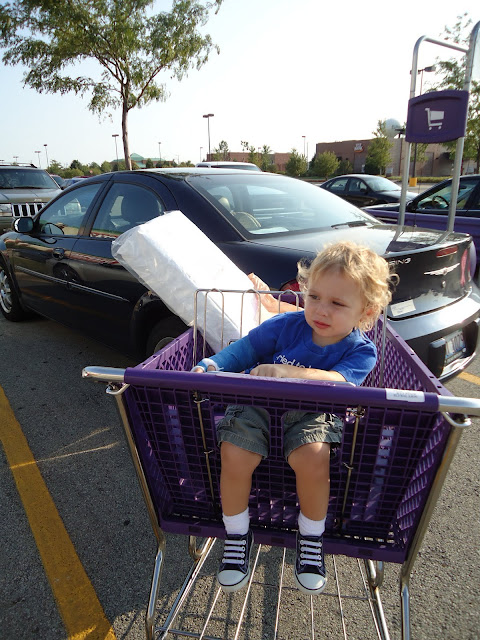 Then there were the stove protectors. Nick has ripped off one of the plastic thingies that cover the knobs on our stove, actually cracking the plastic. Unfortunately, you can't buy just one or two, so I had to get an entire package of new ones. That's another $9. 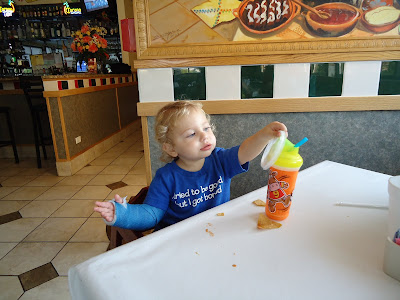 Nick also keeps breaking his sippy cups. He throws them on the floor when he's mad, cracking the plastic, and then they leak. So I had to buy him some new ones. I got nice insulated sippy cups, with animals on them. They also have nice straws and they're thin enough for Nick to hold with one hand. He's had a hard time this week holding his drinks because of his cast. When he saw the orange cup above, he announced, "Moo!  Ball!" Yup, there are cows playing soccer printed on his sippy cups. Those were $10 for three cups. See his t-shirt? Got that at a garage sale for $0.50. It says, "I tried to be good, but I got bored." 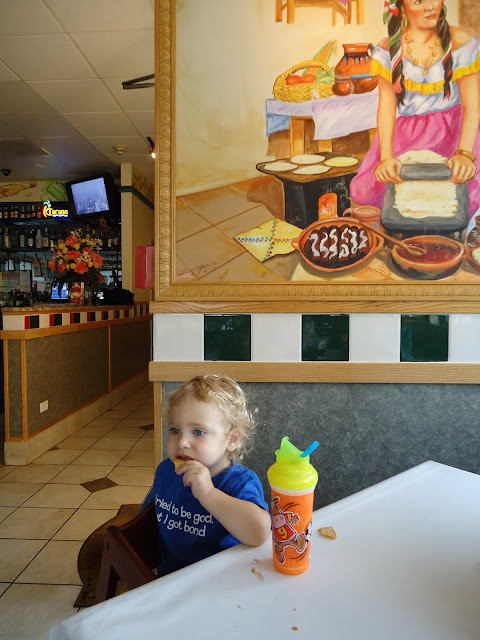 After all that shopping, Nick and I were hungry, so we decided to try a new Mexican place in Plainfield, called La Adelita. Their chips were yummy, but the salsa and the food overall was a little spicy for me. Still good, though. We had quesadillas. Nick loved the food, even the spicy stuff. He was shoving the lettuce garnish in his mouth in handfuls, and he kept begging for more salsa. Before I had Nick, I felt just a little uncomfortable eating out by myself. Now I have a regular dining partner. He's pretty good company, if a little messy. We actually have little conversations nowadays. His side sounds something like this: "More chips!" "Moo ball." "Mmm chicken." "Birdie!" (pointing to a bird on the mural) "Hello!" (to everyone who walks by the table) "Tea!" "All done."

He might be expensive, but Nick is worth every penny.  I've really enjoyed spending so much time hanging out with him this this summer. Only about two weeks left, though. . .
Posted by Melissa E. at 9:03 PM