Nick calls any kind of bread, "BED!" He's even been known to stand right next to where we keep the bread box on the counter, screaming "BED!" until he gets a piece. Heaven forbid if I am out. I've been making our own bread about twice a week for well over a year now, and I love how I can control what is in it. No preservatives for us!

On Sunday I made some fresh baguettes to go with a fancy salad Greg made (Spinach and chorizo with tomatoes and a roasted garlic vinaigrette dressing). We were both cooking in the kitchen at the same time, which is quite a challenge when you have a 21-month old underfoot. He could smell the bread rising and baking, and Nick isn't very patient, so we heard a lot of demands for "BED!" 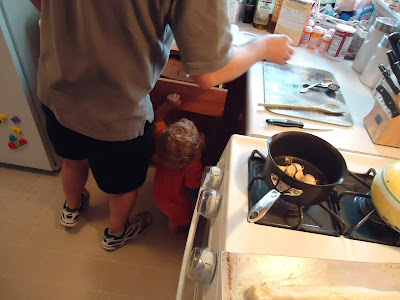 These baguettes are the same ones I made for my mom's birthday, in July. I wanted to make them again before posting the recipe so that I could show how the dough looks like before you bake it. I got the original recipe here. These baguettes are a lovely recipe to make when you're just sitting around the house all day. They aren't difficult, just time consuming and addictive.

Warm 1 cup of water (I put it in the microwave for 30 seconds.) Add that into your bread machine. Then dump 2 1/2 cups of bread flour evenly on top of the water. (Yes, it has to be bread flour. Put the salt on top of the flour at one end and the yeast on the other end. Close the lid and start the "dough" cycle.

Once the dough cycle is complete, take out the dough and divide it into two balls. You don't have to knead the balls entirely, but do push out any air bubbles. Place them on a greased cookie sheet and put a towel over them in a warm area for 20-30 minutes, or until they've doubled in size. 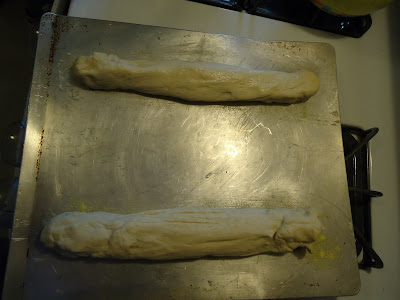 Preheat the oven to 375 degrees. Then form the dough balls into baguettes. Sprinkle some cornmeal on top of the cookie sheet under where you are going to put the baguettes. Place the baguettes on top of the cornmeal, and cover them with a towel. Above you can see what mine looked like before they rose for the last time. Let the baguettes rise near or on top of the preheating oven for another 30 minutes, or until they've once again doubled in size. They'll be bigger, like the ones in the picture below. 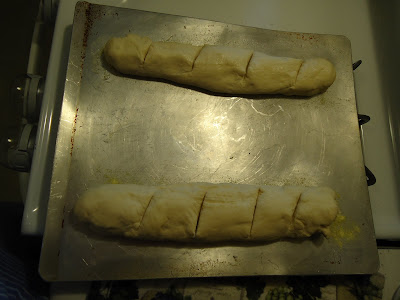 Cut 4 or 5 slits diagonally across the top of the baguettes, and brush them lightly with water. (I used one of those silicone brushes.) Then put in the oven and bake for 25-30 minutes. While they're baking, brush with water again at least two more times. They get just slightly browned when they're done. 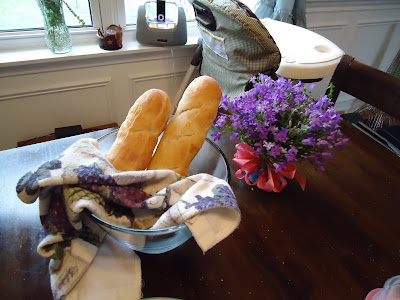 Above you can see what the finished baguettes look like. They're pretty consistent, and I've made them four or five times now. For a fancy and delicious appetizer, spread some goat cheese on slices of bread and sprinkle fresh thyme and rosemary on top. Place in the broiler for just a few minutes, until lightly browned. Delicious! Can you tell that Nick likes my baguettes? Especially with butter, which he calls "Butt!" 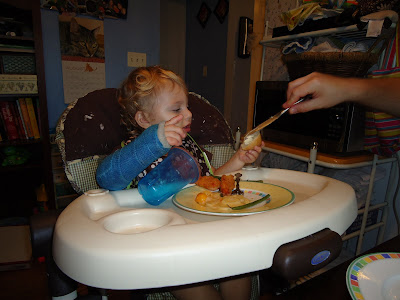 Another variation on the baguette recipe actually makes them higher in fiber. I tried it once and they turned out great. Just use 1 1/4 cup of white whole wheat flour and 1 1/4 cup of bread flour, and then add 1 T of vital wheat gluten. Follow the recipe the same way, and you'll have a lot more fiber in your yummy bread. 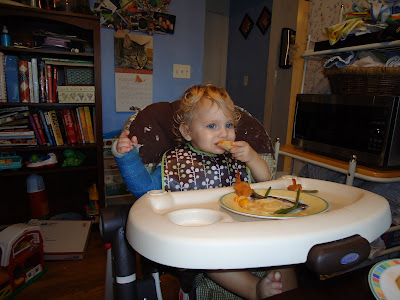 Nick gives this recipe his seal of approval!
Posted by Melissa E. at 7:22 PM