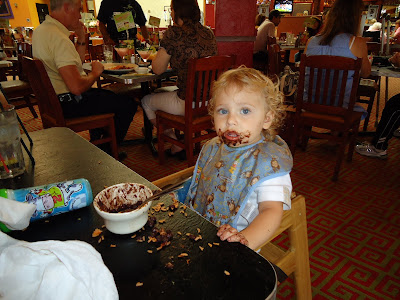 Summer is almost over. My first official day was Wednesday, when I led some training for new teachers. School starts next Tuesday. To end our summer, Nick and I went up to Woodfield last Thursday to visit Grandma Toni and Aunt Sarah. We met at a Mexican restaurant, where Nick promptly ate an entire bowl of black beans. Yup. The whole thing. Good times, good times. 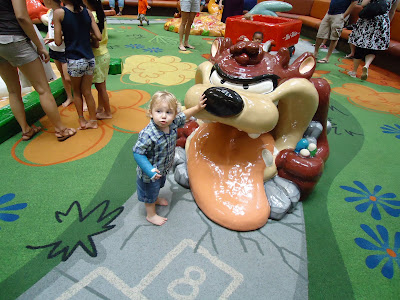 Then it was off to the playland at Woodfield. This play area was both bigger and cleaner than the one at Fox Valley. In fact, they kick everyone out of it a few times a day and clean it. Nick loved climbing and running around. There were so many kids, though, that the three adults had a hard time keeping track of Nick. It was like a game of Where's Waldo. 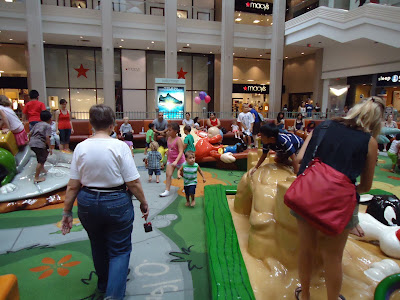 I've realized that if Nick doesn't have a certain amount of time to run around and climb, he starts to go nuts. He'll throw fits and climb the furniture and launch himself off of it. This was his time to be active. His cast sure isn't slowing him down any. 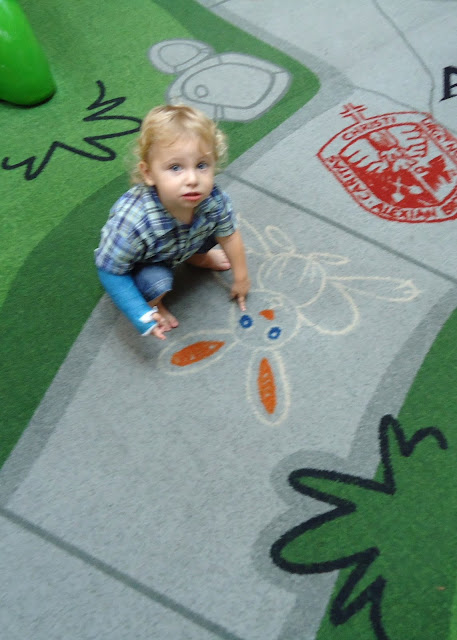 After a few hours of shopping, we had some Yogen Fruz. Usually, I can't eat ice cream without getting a tummy ache, but I can handle frozen yogurt just fine. I had strawberry frozen yogurt with chocolate chips. Aunt Sarah had vanilla with oreo cookie chunks. Nick got both. He got very excited after he had his first bite. In fact, he kept demanding to have more "Yogurt!"

By this time next week, I'll be longing for my next vacation, when I can take Nick to the mall for fun and frozen yogurt. But I think he'll be just fine. He loves going to the babysitter, because there are other kids for him to play with, and they run around outside every day. Plus, this year Nick will get to spend two days each week with his Grandma Toni. Lucky boy.  :)
Posted by Melissa E. at 6:14 PM