Yesterday we went to a wedding. It was my cousin Amy's wedding, and it was at the Copernicus Center on the Northwest side of Chicago. The ceremony and reception were lovely, and we would have had a delightful time, if we'd left Nick with a babysitter. The food was phenomenal, especially the rice and the peppers. But we didn't get much time to enjoy anything. I knew my relatives would want to meet Nick, since many of them haven't seen him at all. My dad's side of the family is wonderful, and I don't get to see them very often. So I'm glad we brought him, but by the time we left, I was so tired I fell asleep in the car. 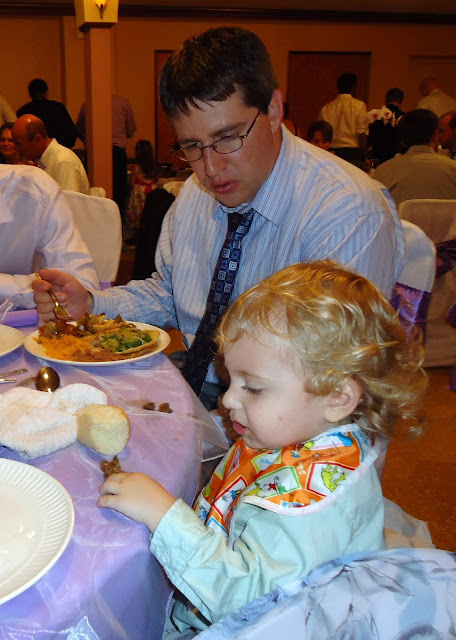 I don't have a lot of cute pictures from last night, and the reason is that Greg and I spent the entire time at the wedding and reception chasing and quieting a very active toddler. I managed to snap a few quick pictures at dinner, but that's about it.

I've tried not to be one of those parents who complains incessantly about their child's behavior. I think that children pick up on that, and live up to your poor expectations. Rather, I try to find the humor in situations where my son causes trouble, because I know that he's usually just acting his age. I also have a pretty good idea of what so-called "normal" behavior is for kids at different ages, because of my many years of working in day care centers. My kid has an easygoing temperment, and he's been great at eating, sleeping, and even following directions, at least most of the time. In the baby lottery, we hit the jackpot. 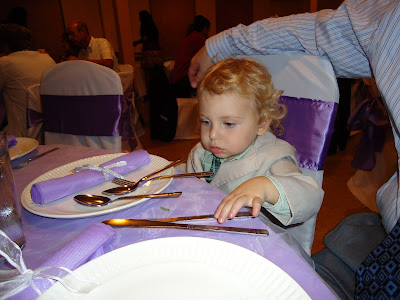 But Nick is still only 20 months old, and asking him to sit still and be quiet is just more than he can handle. Greg and I are still learning to deal with the embarrassment of public temper tantrums and such. There were plenty of other families with children. For some reason, though, our child was by far the loudest and the most obnoxious at this event. In retrospect, it's kind of funny, and I want to remember all of the cute/annoying/obnoxious/hilarious things he did. Here's how our evening went.

Problem #1: The rule of toddlers is that if you give them a bath and dress them in fancy clothes, they will inevitably get dirty. We arrived at the wedding just in time to realize two things: 1. Nick had filled his diaper to the brim, and 2. There was no changing table in the restroom. So we started our evening out in the 90 degree heat in our fancy clothes, wrestling with Nick in the back seat of the car, trying to change his diaper.

Problem #2: Nick loves music. This ceremony had some great classical music, played live by two musicians who were very good. However, any time they stopped playing the music, Nick would shout "Uh-oh!" very loudly. We stuck a binky in his mouth, but he'd just take it out and yell every single time the music stopped.

Problem #3: Nick has learned to talk. This is a wonderful thing, but we haven't figured out yet how to make him stop when it's quiet time. Such as when a wedding ceremony is in progress. The Copernicus Center's Theatre has a lovely ceiling that looks like the night sky, and Nick kept randomly pointing to things and naming them. Loudly. As in, "Sky!" or "Moon!" So the minister would be reading a solemn prayer, and Nick would suddenly pull out his binky and should, "Clock!" (There was a clock in the theatre, too.) Only he doesn't say it like that. He tends to leave out the "l" sound. Sigh.

Problem #4: Toddlers don't sit still. He had to be taken out of the ceremony because he started screaming to be let down. Greg had to run up the aisle and take him to play outside, and he missed the second half of the ceremony.

Problem #5: While we were upstairs having appetizers, Nick ran around stealing food from plates, smashing crackers into the carpeting, trying to drink out of people's glasses, and playing with toothpicks. He reminded me of that guy at the college parties, you know, the one who walks around finishing everyone's abandoned drinks. At one point, he tried to throw broccoli from the balcony and steal stuff from someone's purse. You'd think, "Well, why didn't you just carry him?" Yup, tried that. He screamed every time we picked him up for most of the evening.

Problem #6: We neglected to bring either the stroller or the booster seat. There were no high chairs either, so Nick had no restraint other than our arms. Thus the chocolate smears all over Greg's sleeve. I wish I'd taken a picture of Nick in his suit, post dinner. It was quite hilarious. But Nick still out ate most of the people at our table. He loved the food.  :) 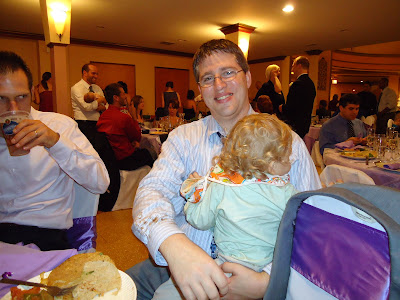 For much of the evening, Nick screamed whenever we wanted him to sit with us. Greg and I ended up taking turns chasing him as he walked around. At one point, while Greg was getting his dinner, I was watching Nick and he ran away from me, right into the men's room. I had to recruit a nearby male to go and retrieve him. Nick thought the entire thing was hilarious.

We left pretty early, but still about an hour after Nick's bedtime. Honestly, we were afraid of what would happen if we stayed any later. Nick was as well-behaved as he could be, for a toddler at a wedding. Something tells me that later on, we'll look back on this night and smile.
Posted by Melissa E. at 7:28 PM