For my mom's birthday in July, Greg and I decided to do something different. We invited my mom and stepdad, along with my sister and grandma (and her puppy) over for a French-themed dinner. My mother is a definite Francophile, and my stepdad has taken her to Paris several times. We wanted to do something special for her, and hopefully that's what we achieved. I took lots of pictures, so I think I'll have to do two posts for this birthday dinner party, one about our preparation and appetizers, and one about the dinner and dessert. My sister did a post with more pictures from this day, if you'd like to see them. 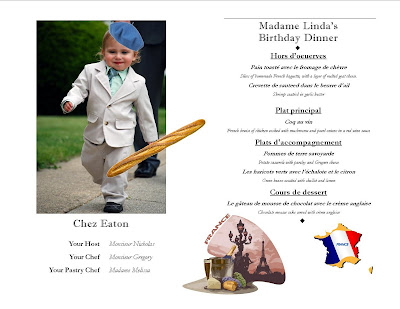 It was harder than I'd thought to put a beret on Nick's head, but I managed. By the way, neither Greg nor I are fluent in French, though we both had several years of high school French. I used an online translator.

Greg used his Williams Sonoma French cookbook to plan the main course and side dishes, while I planned the appetizers, baguettes, and dessert. We ended up picking some pretty complicated recipes, but we wanted a challenge. This menu was definitely a challenge, but it was kind of fun for Greg and I to work together to create something special. 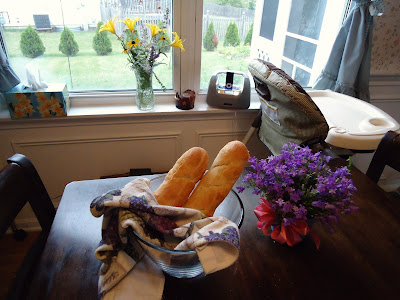 The baguettes were easier than anticipated, although they took hours of rising before they were ready. I ended up making four baguettes, and all of them were gone within 24 hours, so I guess that means that they were good. I adore baguettes fresh from the oven, and I was surprised at how much mine tasted like the ones I had in Paris. I will be making them again, often. 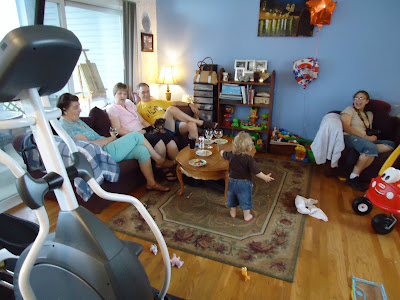 Here is the appetizer course, which was: 1.) shrimp and tomatoes (from my garden!) sauteed in garlic butter, and 2.) slices of homemade toasted French baguette, with a layer of melted goat cheese, rosemary, and thyme (spices fresh from my garden). This was all that was left by the time I thought to take a picture of the appetizers. Nick devoured everything, and was even licking goat cheese from the bread, saying, "Mmm!" Can you see him sneaking more bread in the picture above? By the way, the birthday madame is seated in the center part of the couch, in the pink. My stepfather is sitting on her left, and my grandmother on her right. My sister is the one with the camera, laughing at Nick's antics. 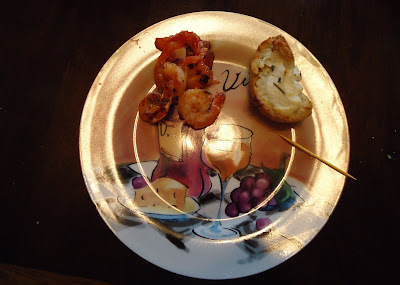 Greg planned the main course, which was Coq au Vin with french green beans and a potato casserole baked with Gruyere cheese. Our whole kitchen smelled divine while the chicken was cooking, and Greg worked very hard. We had all of the burners going, plus the oven, for much of the afternoon. 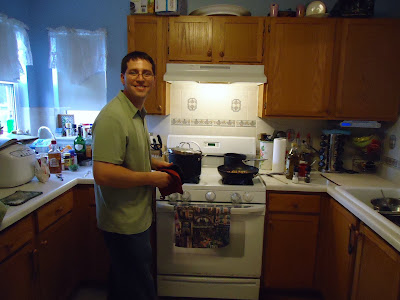 I thought the potatoes were cooked perfectly, and the Gruyere cheese added something unique to the dish. I told Greg we should double the amount of cheese next time--it was that good. 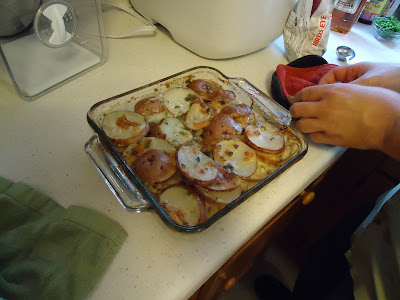 Just looking at this picture of the Coq au Vin cooking makes my mouth water. I want to try more wine sauces, now that we've tasted this one. 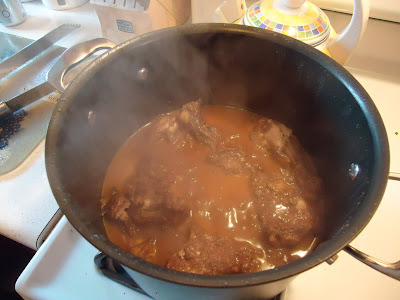 I told Greg that he can make this recipe for me, anytime. The sauce was so good that we defrosted some chicken breasts the next day and used the sauce on them. The chicken was tender and moist, probably because of the sauce.

Greg has been watching a ton of Food Network lately, and I think he's getting a lot of ideas. Hey, as hobbies go, my husband's isn't too shabby.  ;)

Tomorrow I'll talk about the actual dinner and, of course, the dessert.