. . . about a new parenting technique I learned from The Happiest Toddler on the Block, by Harvey Karp. There's this idea for increasing good, or "green light" behaviors, in toddlers, that I really liked when I read it. What you do is whenever your child does something specific that is positive, you give him a little check mark (in pen) on his hand. Then, at the end of the day, you can talk about what each check was for. The idea, of course, is to avoid labels such as "good boy," and to concentrate on praising the actions rather than the child. Nick has responded really well to this, and he loves getting the pen checks and showing them off to everyone. I've been using it only a few days, and it's been pretty successful. Today he got a pen check for helping me pick up the fruit snacks that had fallen on the floor, and another for immediately stopping when I told him to leave the kitty alone. I reminded him what those checks were for several times, and he got a big smile every time I talked about them. There is one problem, however. . . 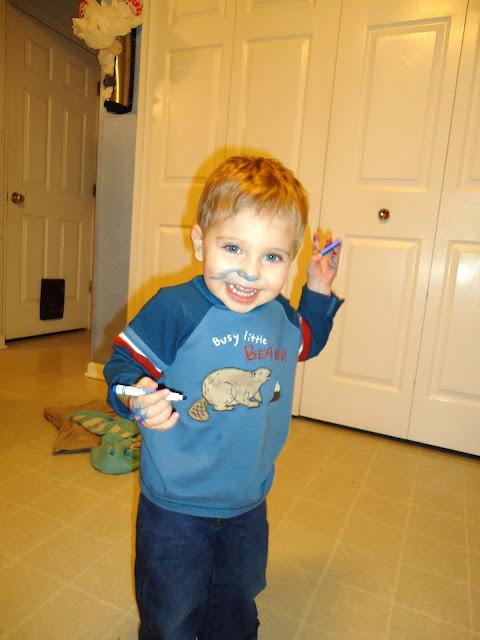 You see, Nicholas just received some of those Crayola Pipsqueaks markers for Christmas, and he decided (while I was on the phone, I believe) to give himself some checks. Never mind that he was squeaky clean and had just had a bath not one hour before this photo was taken. Look at his right hand, in this picture and the next. Those are really big checks. He must've done something spectacular. Nick also gave himself a moustache. Then he decided the refrigerator would make a really good canvas. . . 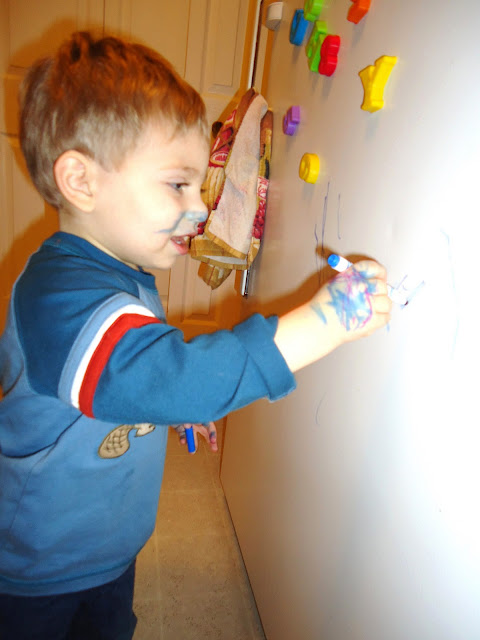 Yes, I know there would've been less damage done if I had taken the marker away before going to get my camera. But I hate my refrigerator anyway, and pregnancy horomones have me so messed up lately that all I could do is snap a few pictures, grab that marker, and then sit on the floor laughing. I didn't say a word to him, but I think he got the picture. He stood staring at me for a minute, then looked back at his hand and his refrigerator artwork that needed no magnets. Nick came and sat in my lap and said, (and I quote) "Color on paper ONLY." Yes, Nick. That's the rule. 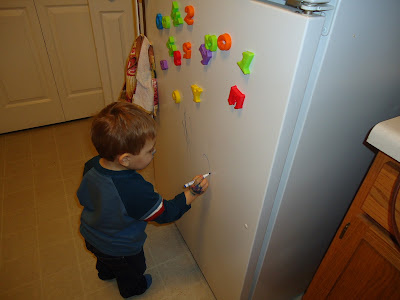 I do think that I will be putting the markers up for awhile, and only taking them out when I'm closely supervising the action. I noticed later on that my couch covers and the rug under my cocktail table also have some marker stains. Sigh. We'll see if the magic eraser and some Oxy-Clean will do the trick with these stains. One day, if my son is a famous artist, I can use these pictures as proof of his innate creative ability, even from a young age. Or I can look at them and smile.
Posted by Melissa E. at 9:14 PM