Since Greg and I moved here at the end of 2006, we've been bemoaning the lack of good restaurants in the Plainfield/Joliet area. Most of the time, when we want to go out to eat, we drive up to Naperville. That's because most of the restaurants out here are of the local diner or chain restaurant variety, and honestly aren't very good. It's kind of frustrating to have to drive 45 minutes for a nice meal. But we recently found one excellent restaurant just a few miles from home. We went there the day after Christmas, and were really impressed. It's called Barolo Ristorante. Here we are at our table. 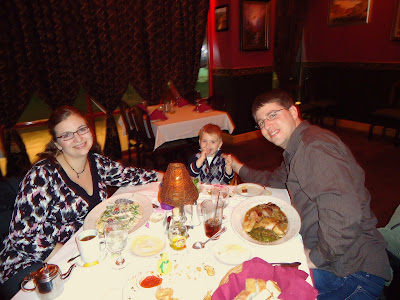 The food was really creatively prepared, and my pasta dish was so cool-looking that I had to take a picture of it. There are spinach and regular pasta noodles with a cream sauce, asparagus, and cherry tomatoes. The seafood is scallops and shrimp. It was absolutely everything I wanted in an Italian meal. 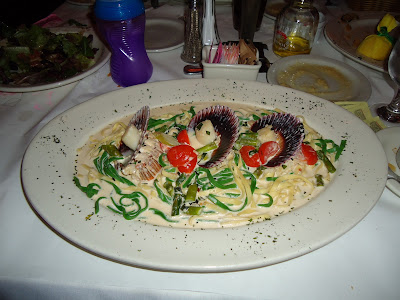 Nick ate very well, too. He ate plenty of calamari (which was perfectly cooked and not chewy at all), some salad, tons of my noodles, and a bunch of Greg's duck. I guess Greg had never had duck before, and he really liked the way they prepared it. Oh, and the tiramisu was just perfect. You know how sometimes it's too cakey? This was just creamy enough, with lots of the coffee flavor. Nick loved it, too. 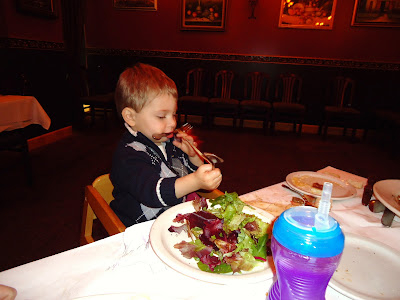 Nick was especially fond of the noodles, although he hasn't quite mastered the art of eating them with a fork. That's more of an advanced fork skill, though, so I guess he'll figure it out soon. 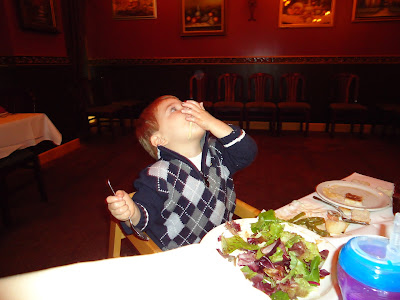