I was bored this morning. Greg had to work, and I didn't feel like doing anything around the house. Nick tends to get a little stir-crazy if we just hang out around the house all day. Also, I was having a craving. . . for fried calamari. One of those cravings that just won't let up until you've quenched it. So I decided to go on a date with a very handsome fellow. He held my hand and shared my drink. 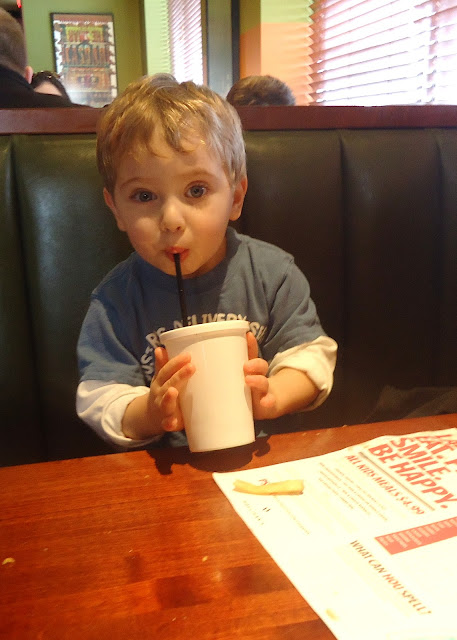 You know, one of the things I really like about being a mom (most of the time) is that I'm seldom alone. I feel weird going to sit-down restaurants when I'm by myself, but that feeling disappears when I have a pint-sized date along with me. Most of the parents I know tend to take their kids to more casual places over sit-down restaurants. I have a hard time doing this. Think about it: pregnant lady juggling a (nearly) 30-lb. toddler, a big purse, winter coats, a tray, and drinks. I'd much rather go somewhere where a waitress takes care of all the hard stuff. I know that toddlers are notoriously naughty in restaurants, but I figure that the only way to teach Nick to behave in public is to keep taking him out in public. I like to eat out, and I don't want to give that up just because I am a mommy. We went to the new Houlihan's on 95th Street on the south side of Naperville. 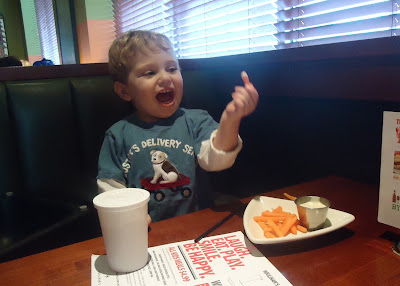 Our waitress saw how antsy Nick was and offered to bring us some baby carrots and ranch dressing right away. This was perfect, and Nick thought the ranch dressing was some kind of miracle. He loved it. I usually stay away from chain restaurants. But I'd heard good things about Houlihan's so we decided to give it a shot. I was floored by their great new menu. They have a whole "small plates" section that includes casual stuff like burgers and fries as well as more highbrow items like calamari and scallops. We ordered calamari (of course!), a spinach salad, fancy parmesan french fries with three different sauces, and chicken tortilla soup. Check it out: 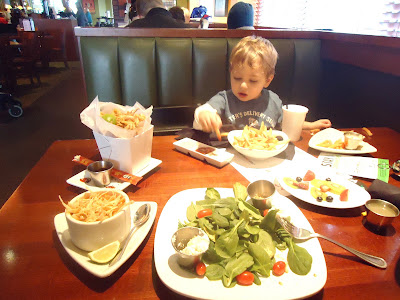 For me, small plates are just perfect because I can't eat a ton of food in one sitting. (I had Roux-en-Y bariatric surgery back in 2003.) I love the idea of trying lots of different foods, but my favorite part was that they had the item I had been craving so much--calamari!

I also don't have Nick order from the children's menus, because I want him to grow up eating things other than chicken nuggets, pizza, and hamburgers. So we shared. Nick was adventurous enough to try everything but the soup. (The only reason he didn't eat that is because I'd forgotten a bib!) He especially liked the calamari dipped in chipotle ketchup. I ended up eating my whole salad, most of the calamari, some fries, and a few bites of soup. I took enough home to make another small meal.

I couldn't turn down the "small" dessert, either. We ended up with the white chocolate banana cream pie, and Nick would've eaten the whole thing himself if I'd let him. 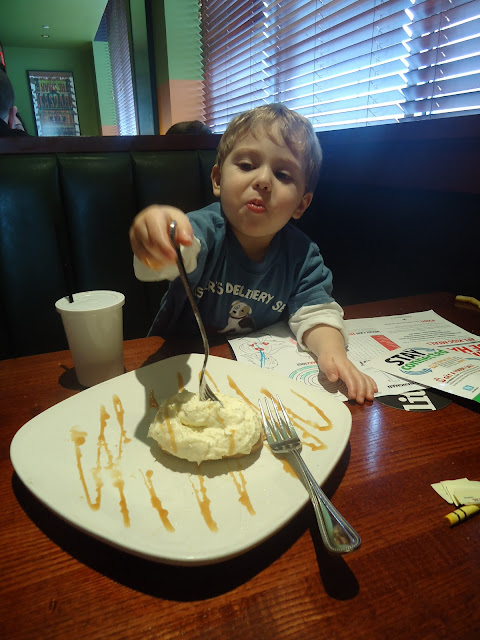 Nick isn't always an angel in restaurants, but he was very good today. He ate a ton, didn't throw any food, kept his voice down (for the most part), and chatted with me the entire time. He was a very good date.  :)  Nick even earned a check on his hand for listening. You see, he usually sits in a high chair, but this time I let him try a booster seat. It didn't work because he couldn't reach the table, so he just kneeled and it worked fine. At one point, he tried to stand in the booth, and I told him, "No, sit down." He did, right away, so I gave him a check for being a good listener. 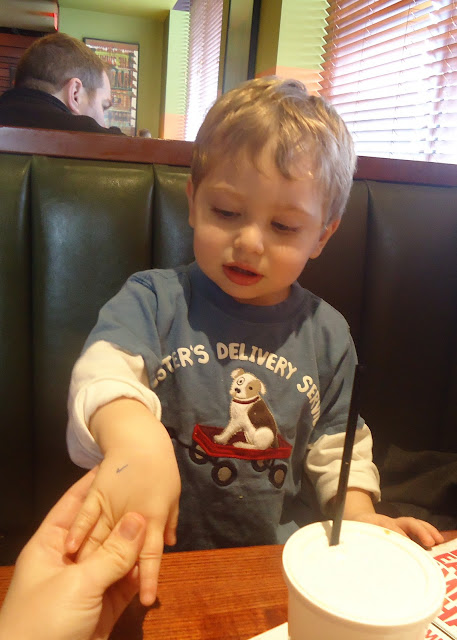 I think the checks are working pretty well, so far. We just have to keep pens away from him. As for Houlihan's, I think we've found a new spot to go regularly. I checked out their webpage, and supposedly they make all of their food fresh every day. I don't know about that, but it was sure tasty to me. Next time I want to try the mini-burgers and the goat cheese bread. Oh, and our whole meal? It was a little over $20. Not bad for such fancy fare.
Posted by Melissa E. at 8:46 PM