So do I look pregnant yet? 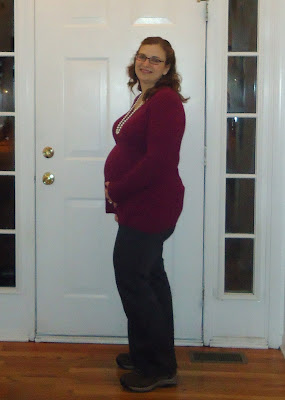 I had my stepmom snap this picture last night. I'm 17 weeks along, and I'll go for my growth ultrasound on January 18th. Nick has been poking my belly a lot, but he doesn't seem to understand that it's not okay to climb on top of it. We'll keep working on that. I am prettty sure I can feel the baby moving around in there, but it's still at that stage where his movements are random and indistinct.

I thought I would start posting updates about my pregnancy, now that I've announced it. I don't have many pictures of my pregnancy with Nick, because I was uncomfortable with how big I became. Now I kind of regret not having pictures to document it. So for this pregnancy, I'm going to try to post updates here sometimes showing my progress. Hopefully it won't be too boring.

First of all, here are the stats:

Weeks Pregnant: 17w4 days
Weight: (From starting weight) -6 pounds
Exercise: Physical Therapy counts, right? That's 3x/week for at least an hour, plus 10 minutes of exercises day and night. No cardio yet. I have to work on that.
Cravings: Goat cheese, macaroni and cheese, Spaghetti O's, anything orange
Sleep: Getting tougher, due to getting up in the middle of the night. Also, my body pillow from my first pregnancy disappeared, and I'm too cheap to buy a new one. Yet.
Symptoms: I read somewhere that in the second trimester, exhaustion is supposed to leave. Not me. I could still sleep twelve hours a day.
Mood: Pretty even, though I'm probably a little more irritable. Oh, and random things still make me a bit weepy.


I did find this picture from my honeymoon in 2008, when I was about 15 or 16 weeks pregnant with Nick. I had just started showing, and this was one of the first days I had to wear maternity clothes. Yes, I was in France, at Monet's Garden, in June. Far nicer than being in Illinois, in January.  ;) 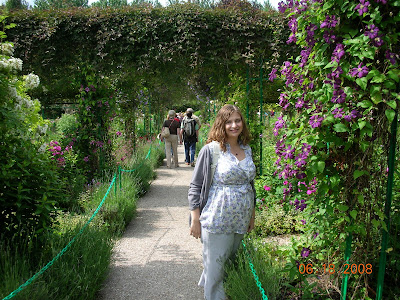 This time around I started showing around 10 or 12 weeks, but I was in maternity clothes from about 8 weeks. My pants stopped fitting, and I refused to buy a bigger size. Instead I just switched over early. My favorite pants are "Secret Fit Belly Pants." They are the most comfortable pants known to woman, and I missed them terribly after I had Nick.

My appetite has been really funny. I'm always hungry, but I can't eat as much in one sitting. I get nauseous about halfway through most meals, especially in the evenings. The nausea isn't as bad as it was in the beginning, but it's definitely still there. I have the exact same cravings that I had when I was pregnant with Nick: goat cheese and crackers, plus all kinds of orange foods that I usually won't touch, like Spaghetti  O's. I think they are nasty unless I'm pregnant. I only let myself indulge with the processed foods a few times a week, but I eat goat cheese every day.

I still haven't gained any weight, but I'm pretty happy about that. I lost six pounds in the first trimester, and the last few weeks I've been holding steady with the -6. (Yes, even with the holidays.) By this time in my pregnancy with Nick, I think I'd gained about ten pounds. Then again, I weighed twenty-five pounds less before getting pregnant with Nick, so I'm starting out at a higher weight. My doctor's goal is for me to gain only fifteen pounds with this pregnancy, so we'll see how that goes. My thyroid makes my metabolism all screwy.
My blood sugar has been rather crazy, and it goes below 50 at least one or two times each day. I've been trying to be careful about what I eat--if I have protein with a complex carbohydrate, it seems to hold my blood sugar more steady. It's always pretty low, though, and the only time I get a reading over 80 is immediately after I eat. Then it drops quickly into the seventies or lower, and stays there. I'm not diabetic, but I am insulin-resistant, and I have post-prandial hypoglycemia due to RNY bariatric surgery that I had back in 2003. When I'm not pregnant, I still get low blood sugar, but it seems to be far more severe when I'm expecting.

This pregnancy has been different because I'm always cold. Now, I'm usually pretty sensitive to the cold, but when I was expecting Nick, I believe I went six or seven months without ever being chilled, even at the end when it was pretty cold outside. With this one, I'm constantly freezing.


Any of you have more than one child already know that the second pregnancy is always much different from the first, because you have one to chase while the one inside of you is telling you to rest. But overall, I'm doing pretty well.
Posted by Melissa E. at 5:57 PM