Yesterday, we took Nick to the Chocolate Festival in Naperville, and he had an awesome time. Honestly, we all had a fantastic time. Think about it: a man who loves chocolate, his pregnant wife who's been craving chocolate, and a two-year-old who can't get enough chocolate, all at a festival dedicated to chocolate. It was a dream come true. 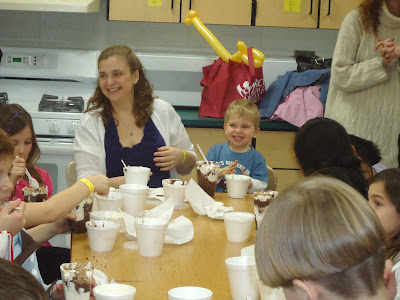 One of the reasons I wanted to go was the Kids in the Kitchen classes, where kids get to do some food preparation of their own, all on a chocolate theme, of course. This festival was held in the home economics room of the Neuqua High School Freshman Center. We rushed to get seats, and Nick immediately discovered that the kitchen cabinets in this place are not child locked. He started pulling out all kinds of cool gadgets. 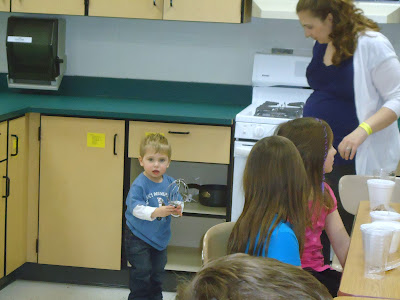 We sat down and got to work. Nick got to make a "Death By Chocolate" dessert. I asked the organizer if it was okay if he made one, and she said, "Sure, if an adult helps him." I laughed and said, "Of course!" This dessert was a delicious layered concoction of chocolate cake, chocolate pudding, cool whip, and toffee chips. I think Nick is going to inherit his daddy's love of cooking, because he really got into this project. He really tried to follow the steps, and one of the ladies running the event said that he did a great job for such a little guy. I think so, too. 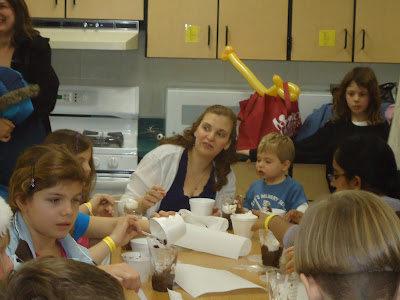 Nick made his dessert mostly by himself, although he made quite a mess. Notice the chocolate all over my arm in the picture below. He needed a total outfit change later that day, due to all of the chocolate. 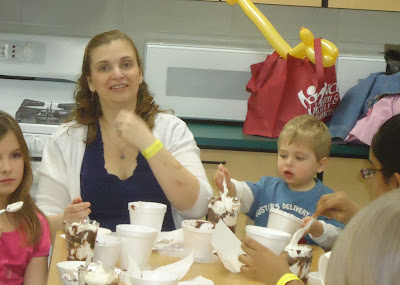 At the end of the session, the kids got to eat their creations, and everyone clapped. Nick clapped the loudest and shouted, "Yay!" A photographer from the Naperville Sun snapped his picture and asked me if it was okay to put it in the paper. I agreed, and Nick was actually in one of the photo galleries on their website today. He's famous! Here's the link. I think he's the second photo in the gallery. You know, the kid munching happily on his "Death by Chocolate."