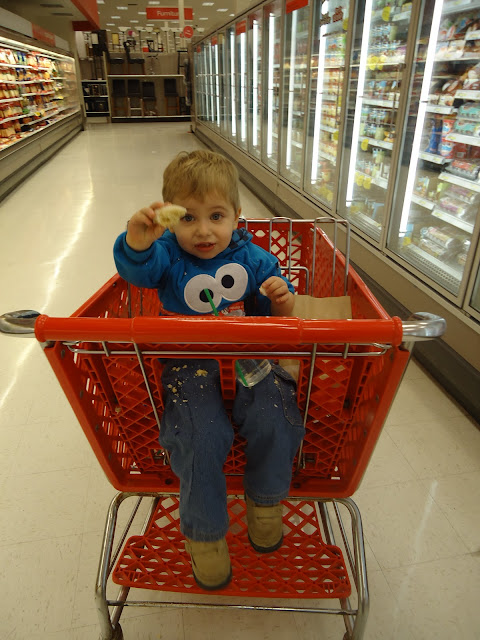 Earlier this week, Nick and I went on a little excursion to the Target. Check out his cookie monster sweatshirt. Nicholas is my cookie monster indeed, and he especially loves the vanilla scones at Starbucks. Note the crumbs all over his clothes.

Every time I go to Target, I treat myself to a caffeinated beverage, usually a nice skim latte.  Actually, I think I may have the most complicated Starbucks drink ever. I've made baristas jaws drop as I tell my order. I order this way: "It's going to be in a grande cup, but it's a tall. I would like a tall, skinny caramel latte with an extra pump of the sugar free syrup (five pumps total), five splendas, extra hot, whipped cream up to the top of the cup, with a little bit of that caramel stuff on top."  Then I always remind them that it's an extra pump, not an extra shot. Someone like me will never sleep if I have a double shot of espresso after 4 p.m.

Lately I've been getting a cup of water for Nick, or else he tries to steal my latte. Yes, my boy likes coffee, and tries to sneak some whenever he can. He snatched a sip one time, and I told him, "No, yucky!" He replied, "Want that! Drink Mommy's coffee!" The last thing this boy needs is anything with caffeine in it, so distraction is the name of the game. Thus the cup of water and the vanilla scones.

I find myself having to run into the store for random things that I forgot more often now. Should I blame it on pregnancy brain? I suppose I can use that excuse for the next few months, anyway. At least I'm lucky that Nick loves shopping. He always asks, "I go shopping?" and then grins widely when I tell him that, yes, we have to go to the store. Something about the colors and the people watching makes him happy. Often there are other little kids he can wave at and say hi to, so he's a happy camper. Plus, in Target, I usually let Nick pick out something from the $1 bins. This time he got a Snoopy coloring book. 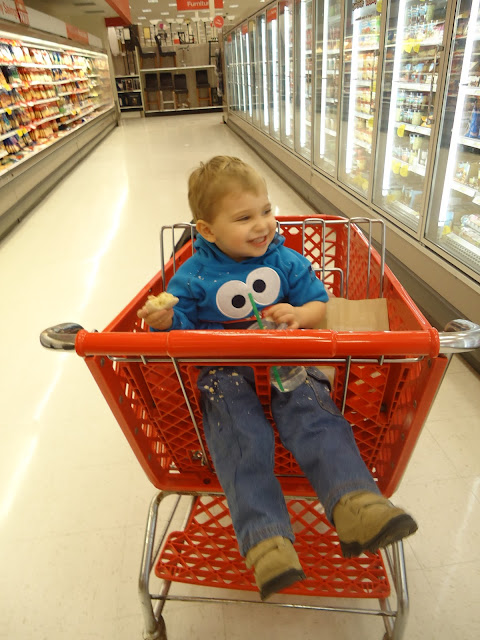 Is it weird that I actually like going to the store with Nick? At least on days when I'm not exhausted. We talk the entire time, about what we see, usually. He also helps me look for things. Like, if I'm looking for milk, I tell him, "Let's look for the milk." (Of course, I know right where it is, but I let him point it out.) Then, I thank him for helping me. When he's older, maybe I'll let him use a calculator to track the totals. For now, he's just my cookie monster, hanging out in the cart and letting me know where to find the cheese.
Posted by Melissa E. at 9:53 PM