Brooding Over a Snowy Future, or Roti Bread to the Rescue! 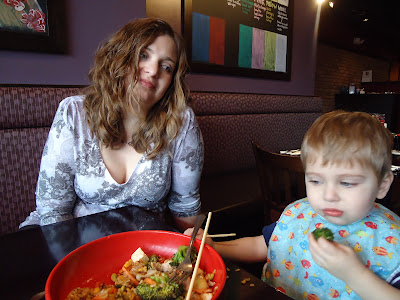 I like this picture of Nick and me, because we both have such brooding looks on our faces. It's because we had just learned about Snowpocolypse 2011, and we were perturbed about the potential for a three-hour car ride home tomorrow. Seriously, though, Greg and I took Nick to Flat Top Grill in downtown Naperville on Sunday. Nothing like a choose-your-own vegetables lunch to make you feel good about eating healthy. 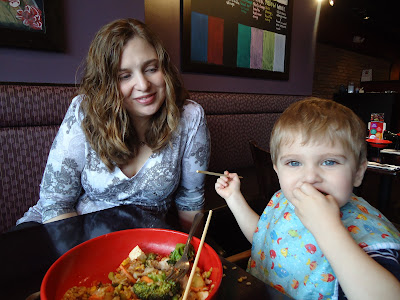 See how happy Nick is to be eating broccoli? Next time I need to get him way more broccoli in his bowl, because it is his absolute favorite. He's even trying to eat with chopsticks, though he stabs more than anything. While we were there, Nick ate broccoli, brown rice, pork, edamame, green beans, mushrooms, carrots, and tofu. Not sure how the tofu got in there, but Nick ate even that. We were really surprised that his meal was free, so we let him pick whatever he wanted to put on top of the rice. We've never done that before--we always just let him pick from our plates. But we figured this was a good time to let him choose his own toppings, and he really liked pointing to the things he wanted. My boy chose nearly everything. 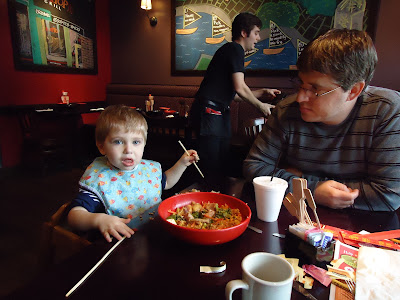 I had been craving their roti bread for quite awhile, and I had two pieces with my lunch. I wish now that I would've requested more. Even reheated, it is delicious. Aren't pregnancy cravings weird? I guess it's a good thing that I was craving roti bread and stir fry; there are far worse things this baby could've been demanding.

Do you want to know the best part? Dessert. It was just perfect, not too sweet, just the right mix of crunch and melt-in-your-mouth goodness. 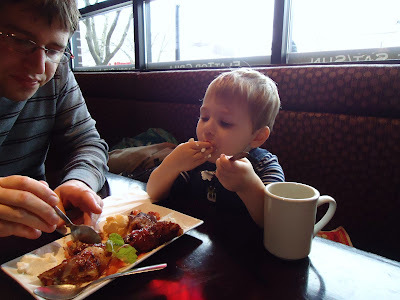 Here's the description of the dessert, from their website:

I do believe that I think about food way, way more when I'm pregnant. (Yes, I did indeed notice that I did two posts in a row about food. It's my blog. I can write about what I want. Lately, I want to write about food.)

I've even been awake in the middle of the night (after one of my many trips to the bathroom), fantasizing about the food I could eat the next day. The positive side is that I crave many healthy things, in addition to the naughty comfort foods.
Posted by Melissa E. at 10:00 PM