Nick's been a little bit under the weather the last few days. He's had a bad runny nose, an occasional cough, and gunk in his eyes. On Thursday he even had a little bloody nose. Plus, he's been extra demanding and whiny. I know that when your kid starts acting like a jerk, they must not be feeling well. So this morning we decided to take him to the doctor's office, just to make sure it wasn't anything serious. You see, Nick once broke his arm and was done crying in just a few minutes. My fear is that one day he'll have pneumonia or something and just act a bit crabby. He's got a pretty good tolerance for pain, apparently. 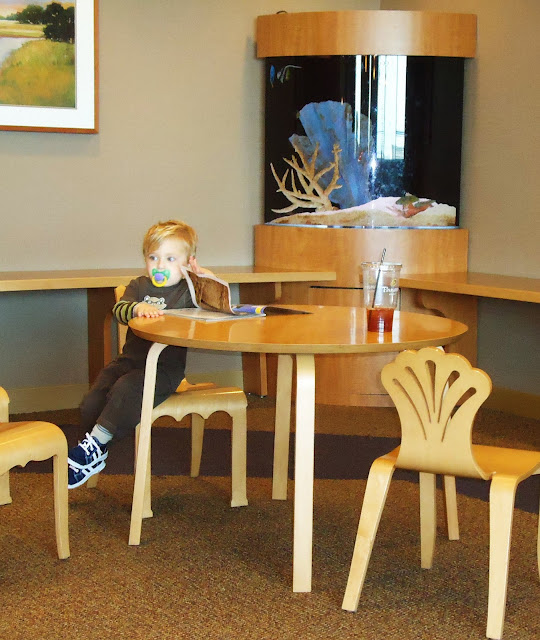 We had to wait awhile in the waiting room, because I had to go get blood drawn first. Nick loved the fish tank, and he moved all of the little chairs around. Then he kept climbing on all of the tables and chairs. He was rather loud, but not screaming. He was more shouting with joy as he ran around the waiting room. I think he was entertainment for the people there. They kept looking at him and smiling. Nick had an ongoing conversation as he went. "I see fishies! I move chair. Drink tea!" 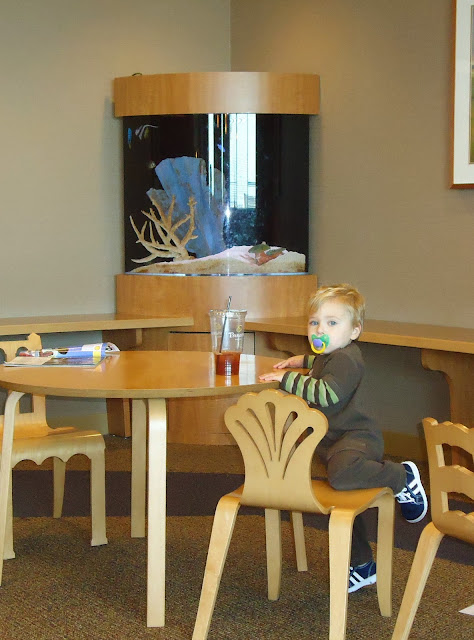 After we were called in, Nick played with the doctor's spinny chair, pulled out the stirrup from the exam table, took off down the hallway, and finally stood on the scale by himself. Apparently, he is pretty badly congested, but there are no signs of infection and he's breathing just fine. Since he had no fever, the nurse gave him his flu shot while we were there. Nick only cried for a second. Then, he screamed (as if in agony) when it was time to put his shoes on. That's a toddler for you.

There was nothing wrong with Nick other than a bad cold, thank goodness.

Anyhow, he's doing well now. The doctor gave us some eyedrop for the goopy eyes, and recommended saline drops for his nose. Both helped, but man was it hard getting them into him! Hopefully he'll be feeling much better for tomorrow.
Posted by Melissa E. at 8:34 PM