A Trip to Iowa: Part One

So, yes, I'm a little crazy. I have Columbus Day off tomorrow, and I decided (rather ambitiously, I might add) to drive out to visit my friend Gardenmom in central Iowa. Nick and I last went to see her and her family in August of '09. Gardenmom and I met in college, and we take turns visiting each other at least twice a year. I spent several hours packing the car Thursday night, because babies require endless amounts of paraphenalia. Then, right after school on Friday, I picked up Nick from daycare and we got on the road immediately.

It's gotten more difficult in the last year to entertain Nick in the car for long periods of time. I did prepare myself with a giant grocery bag of various toys, and thank goodness I did. I kept it on the passenger side and passed Nick back one toy at a time. He has this habit of dropping (or throwing) toys. In the first two hours, Nick went through his stuffed bunny, his toy airplane, his portable zoo full of stuffed animals, His "If You Give a Moose a Muffin" book, several balls, and his vibrating toothbrush. (I was desperate at that point.)

While Nick was good for part of the trip, even spending 45 minutes looking at his book and pointing to the pictures, he screamed for much of the first three hours. At one point, he flung his toothbrush, still on, across the car. Then he decided he wanted it back, and so he screamed for the next hour. I could hear both the vibrating toothbrush (under the seats somewhere) and the screaming baby over the radio. I decided that it was a good time to stop for dinner. I stopped at the first restaurant I saw, Thunder Bay Grille. I visited one before in Rockford, and it was okay, but not great.

But apparently they've gone through some menu changes, and Nick and I were very impressed. 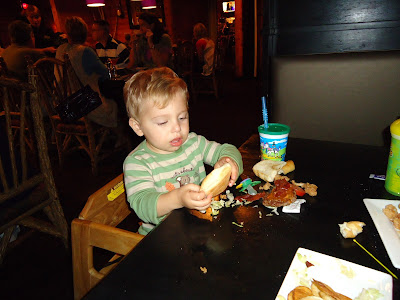 The restaurant has changed its menu to include tapas-style offerings, and they were quite delicious. My bill was only $23, and Nick and I enjoyed calamari, two miniature angus burgers with homemade chips, and a delicious caprese salad in a small martini glass. I'm pretty picky about restaurants that I like, and I usually do not enjoy chain restaurants. The menu at Thunder Bay, though, was one of the best I've seen, and you could tell from the taste of the food that a lot of thought had been put into each dish. 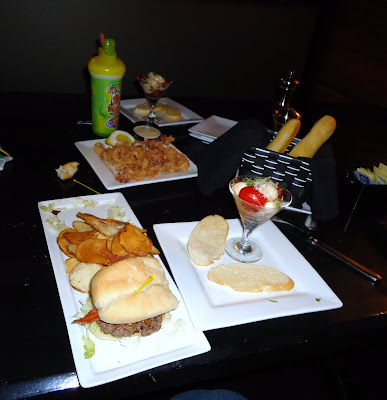 Nick's favorite was the homemade chips. I loved them, too, but only got to eat one, because someone had already eaten all the others. The burgers were a much better quality than I've seen in most similarly priced restaurants. The decor was really neat, too, though a little dark. Some tables were even low to the ground with cushy chairs to sit in. (Nick and I couldn't take advantage of those because of the high chair.) I liked the idea for the mozzerella/cherry tomato salad so much that I'm going to try to recreate it at home.

The calamari was good, too, and not too greasy. But what I thought was spectacular were the breadsticks. They reminded me a little of the ones at the Olive Garden, only with a little less salt and an overall better taste. These tasted less processed and the garlic butter was just enough on the soft bread. I usually do not rave this much about my dinner, but it is really rare to find a menu that is this good right off the highway in the middle of Iowa. I honestly wish they had one near my house, because we'd be frequent visitors. I can tell you that I'll be stopping in every time I go through Davenport.

Nick was in such a good mood after this meal that he went to sleep almost immediately and was out for the rest of our trip. I finally arrived at 11:30 p.m. That means we spent 6 1/2 hours in the car and 1 hour in the restaurant. I'm so glad we went Friday night, though, because we were able to get lots of rest. We needed it, because on Saturday Gardenmom took us to the pumpkin farm for a very exciting day. I'll write more tomorrow.
Posted by Melissa E. at 10:43 PM