On Saturday, we went to Sycamore for a birthday party. One of the highlights of the party was a face painter. Well, Nick was not cool with the idea of getting his face painted, but we knew he'd love getting a moon painted on. The artist asked if she could paint on his hand, and Nick gave permission. 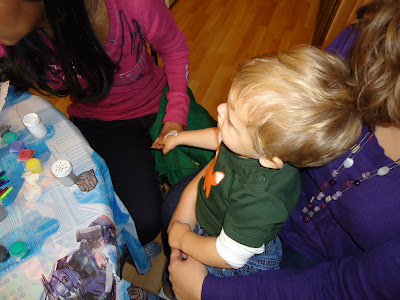 He knew right away what she was painting. Lately, Nick has been fascinated with the moon. I think he didn't ever see it in the summertime, because he never went to bed after dark. Now that the days are shorter, he sees it each night before bed and says hello and goodbye to it. Nick likes to color the moon and he looks for it during the daytime, too. So he kept saying, "Moon! My Hand!" (As he gets closer to two, Nick uses the words my and mine more often. Typical.) Here he is showing off his moon. 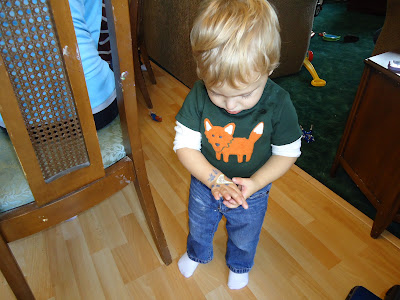 As you can expect, it didn't last long, because he kept touching it. But that's okay. It was fun while it lasted. Plus, cake makes everything better.   : ) 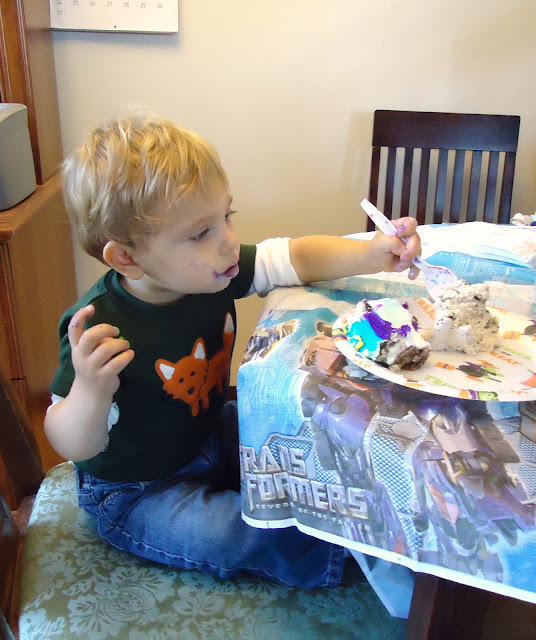 Would you believe that while he got a bunch on his face and hands, Nick didn't get one bite of cake on his shirt? He ate it all! Then he stole some of mine.

By the time we got home, Nick woke up from his car nap and was mad that his moon was gone. "Where moon? Want moon!" We colored one later, on paper, and he was satisfied.
Posted by Melissa E. at 9:33 PM