What to do when you get kicked out of the house. . .

Every year, right before we have a party, Greg kicks me out of the house. He tells me to take the boys and go away for many hours so that he can clean. This year, Grandma Toni was visiting us and she got kicked out, too.   ;)

We started out our day of eviction with a few hours of play at Cafe N Play. You would think this might get out some of that energy for which my children are so well-known, but no luck there.

After working up quite an appetite, we continued our exile with lunch at Flat Top Grill. The boys love it there because they get to pick whatever meats and veggies they want in their stir fry meals. I love it because kids four and under eat free. (Whoo-eee!) 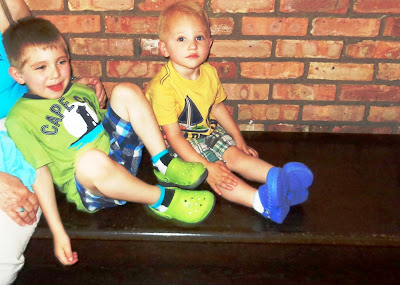 After lunch, we went to Nick's favorite park in the whole world. Henry isn't old enough to rank them, but I'm pretty sure this one would be in his top five as well.


Nick adores the sand box, and he gets sand in his crevices every single time. We let them play a good, long time on this playground.


After the park, we walked along Naperville's Riverwalk for awhile, then out for frozen yogurt at Red Mango, which has the best make-your-own sundaes. Can you tell we were really suffering from being kicked out of the house all day?

The best part of our eviction day was actually our last half-hour or so, when we visited one of the fountains. The boys had seen people cooling their feet in the fountain when we'd walked by earlier, and they wanted to try it, too.

Our day out of the house ended with both boys passed out in the back of the van. I think Grandma Toni and I would've taken a nap, too, had that been an option. It was a pretty tiring day, but we had a ton of fun while Greg cleaned the house.
Posted by Melissa E. at 5:39 PM