The Force is strong with this one. . .

I'm referring, of course, to Nicholas. Greg got him hooked on the original Star Wars movies, and he's been pretending to have a light saber since he was a baby. (No, really, check out the video of Nick pretending to have a light saber battle way back in 2010.) Grandma Toni found out about Star Wars Day during her weekly visit to story time with Henry. It's an event put on by the Joliet Public Library, and she thought Nick would love to attend. She was right.


Now, I was born in 1978, the year the first Star Wars movie came out, and I can honestly say that I've never actually watched any of the movies. I am, however, a good sport, and I got a kick out of all the adults dressing up in costumes, some with more success than others. (Can you guess the identity of the guy next to Chewbacca? I couldn't, and Greg busted out laughing when he saw the picture, and told me he thought it was supposed to be Han Solo.) 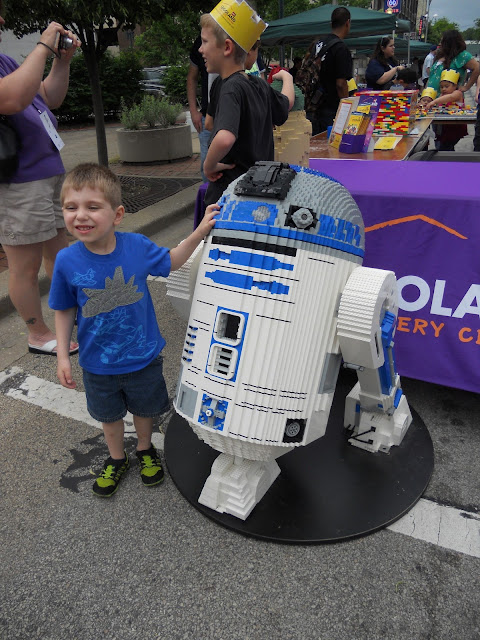 LegoLand was there with some of their Star Wars creations. Nick loved this one of R2D2, though he kept trying to take pieces off of it.

Grandma Toni helped us find characters to photograph and meet. It was like a weird, sci-fi version of Disney World. Nick knew that we were in Joliet, and he asked me, "Mommy, why are there so many bad guys in Joliet?" At first, I thought he was casting aspersions on the city, but then I realized he was just commenting on the Storm Trooper to protagonist ratio in the crowd. Whew. Because, of course, even though our mailing address is in Plainfield, we pay our water bill to Joliet and use the Joliet Public Library. (Oh, and we're in Kendall County, if that makes any sense. It doesn't to us. We have no idea where we live.) Anyhow, I wouldn't want anyone dissing our library, despite the large number of Storm Troopers wandering about.

The library did such a nice job with this program. They had crafts for the kids, and even a tattoo parlor, though all the tattoos seemed to be "bad guy" tattoos. Nick was so well-behaved, and absolutely thrilled to see all the displays and costumes. 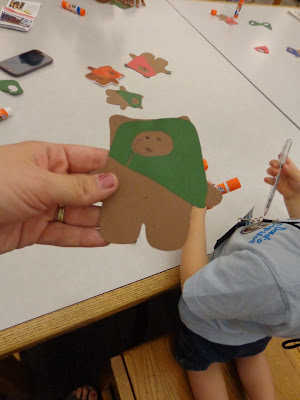 One of Nick's favorite events, I think, was the one below, where he got to use a "light saber" (giant stick) to knock the arm off this abominable snowman looking creature, who must've been in one of the movies. Nick knew who he was right away. 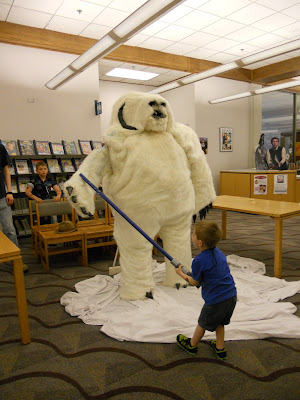 He was ultimately successful, with a little help from a Library Friend. We encouraged Nick and cheered him on, but at a certain point it occurred to me how weird it was to be standing in a public library encouraging my son to use a giant stick to knock the arm off of a furry creature. Ah well. He had fun.

Beanie baby space ships were used to throw through holes in this interesting game. Nick didn't do too badly, though Henry needed some assistance. 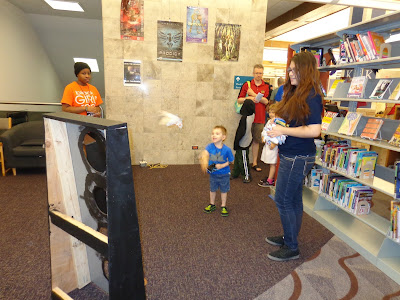 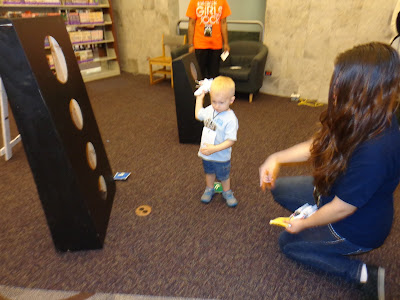 Perhaps the most creative event was the garbage compactor area. I do remember seeing part of one of the Star Wars movies where the characters are in a giant garbage bin, and the library did an excellent job of recreating that. They kept adding garbage and just let the kids roll around in it. My boys simply adored this part. 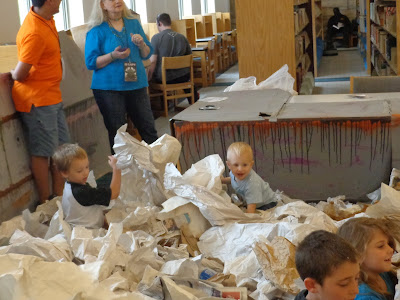 I'll have to remember this activity for when the boys get bored. Fill a contained area with clean, recyclable garbage, and let them dumpster dive and fling it around. 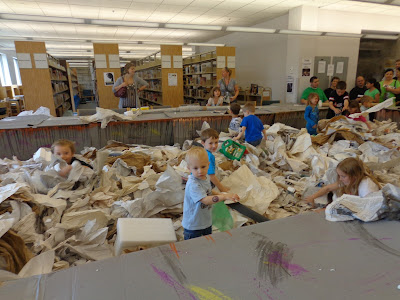 It is impossible to imagine the chaos and joy present in this area through a mere picture, so check out the video.

When it was time to leave the "trash" area, Nick came right out when called. (Score!) Henry, on the other hand, had to be dragged out by me, because he just kept laughing and digging himself deeper into the trash pile.

All that digging made us thirsty, and they even had a Star Wars bar with free lemonade! Grandma Toni was impressed with this. 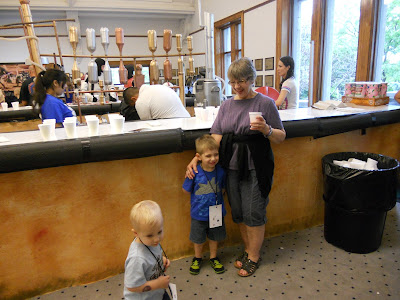 I'm not sure who this guy is, but Nick and Henry did NOT like his fingers, which, incidentally, are impossible to place on someone's shoulder without looking a little risque.


When we ventured back outside, there was a band, yes, a band, with Star Wars characters. 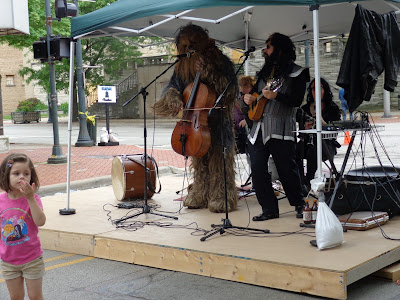 There were also many more Storm Troopers.


I would highly recommend this free event to anyone with an interest in Star Wars, or who is easily amused by adults dressing up in costumes and role playing in the streets. Nick, however, is still having a hard time understanding that Joliet isn't always filled with Storm Troopers and imitation Obi Wans.
Posted by Melissa E. at 10:31 PM