Happy Fourth of July! I was woken up early (7 a.m.) by my husband, who announced that (1.) we were completely out of coffee, (2.) I would need to wake up to watch the kids so he could go buy some, and (3.) he would get doughnuts for breakfast. When you are a coffee addict, every second without that first drip of delicious awake-juice seems like an hour. It was well after 9 a.m. before I had my first sip, and therefore my mood was not, shall we say, patriotic. Henry, however, was gleeful at his fourth of July jelly doughnut.


My project yesterday was to bake something in honor of the holiday. After looking at Pinterest, I feel inadequate if I do not mark each holiday with some adorably complex craft or recipe. I didn't like any of the recipes I found, so I modified a Valentine's day mini-pie recipe, merged several cherry-pie filling recipes, and used a star-shaped sandwich-cutter to make miniature cherry pies. 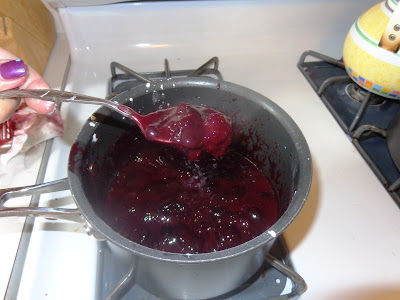 Most of my baking projects start out with me trying to figure out what I have in the pantry or what I can substitute for what I don't have in the pantry. In this case, I used 3/4 cup of sugar, 5T of cornstarch, 1/2 cup of Splenda, and 4 cups of  frozen cherries that I partially thawed and then sliced in half. I heated it up and stirred until the mixture got pretty thick. I couldn't find a large star-shaped cookie-cutter, so I used a sandwich cutter instead. I had ready-made pie crust in the freezer, so I just rolled it out like cookie dough. The only problem is that it cut the star into two pieces, so I had to pinch the halves back together again. 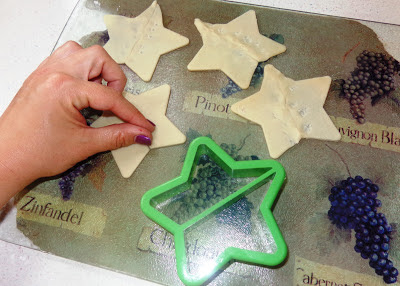 Then I scooped some cherry pie filling onto each star. I think I overfilled some of them a bit, but the leaking stars ended up tasting the best, so no problem there. 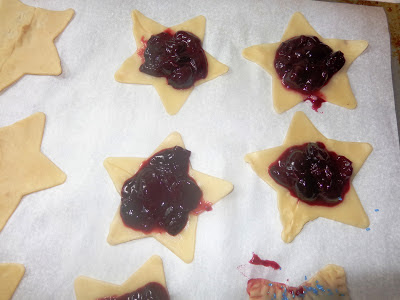 To make them into tarts, or pies, or whatever you'd like to call them, I simply placed another star on top and pressed around the edges with the tines of a fork. Then I sprinkled blue sprinkles all over the top. I wish I would've added more sugar on top. That was the best part. 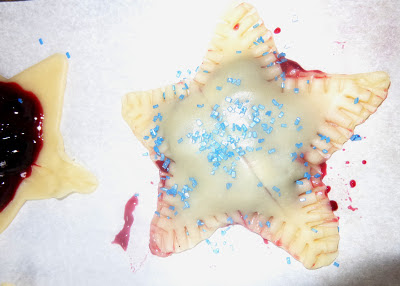 I believe I baked them in a 375 degree oven for 10-15 minutes. I watched them pretty closely until they just started to brown. Here's what the finished product looked like; they tasted even better than they looked. I love the flavor of real cherries, and the Costco brand frozen cherries are magnificent. 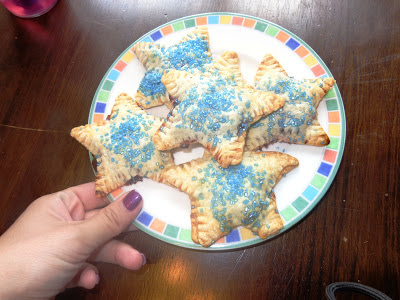 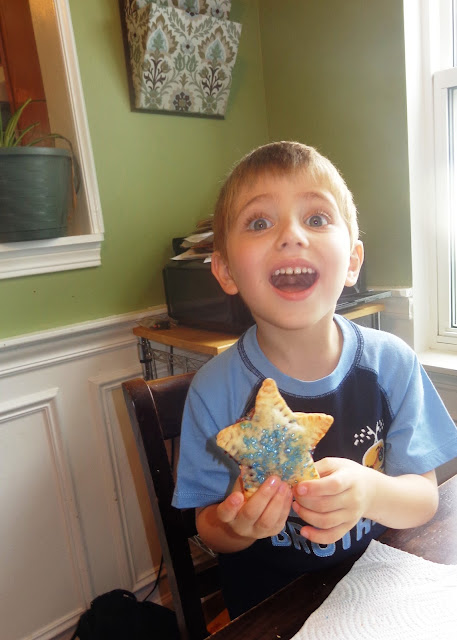 Greg was a bit annoyed that I asked to take his picture. 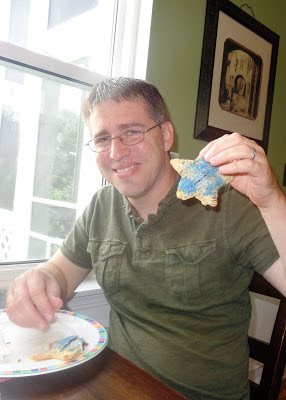 Henry loved his pie. He wouldn't look at the camera, and he ate his pie from the inside out. First he picked out all the cherries, then ate every last crumb, bit by bit. 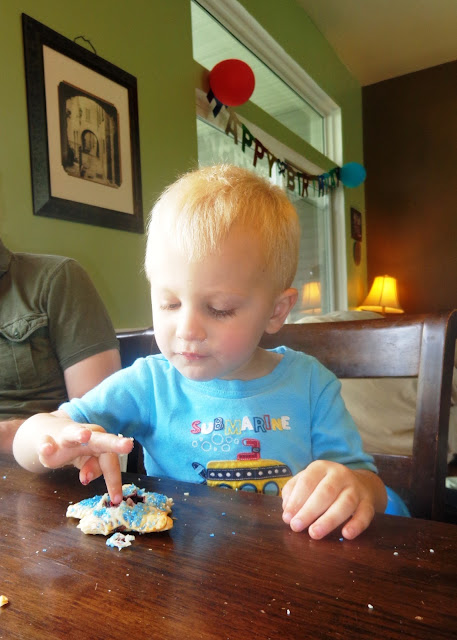 We're hoping to see some fireworks tonight. I hope the boys stay in a good mood and enjoy the show. Nick's been talking about seeing a fireworks show all week. Have a great holiday!
Posted by Melissa E. at 2:15 PM