Greg and I have been to Mammoth Cave before, way back in 2006, when we'd been dating for less than a year. It was a really fun trip, and Greg brought back a coffee table book that Nick likes to look through. He's been begging to go "to the cave" for years, and he was thrilled when he found out about our destination. We decided to stay on the grounds of Mammoth Cave National Park, which is in Central Kentucky.

We were tired and hungry as we pulled up to the park, and decided to eat at the Travertine Restaurant, which is the sit-down restaurant in Mammoth Cave Hotel. They had lots of really cool pictures, both modern and historic, of the caves and the park.

We ended up eating in this restaurant no fewer than FIVE times from Thursday evening to Saturday afternoon, and generally the food was decent. The park also boasts a coffee shop and a fast food place, but we didn't try either of those--we stuck to the Travertine. You can check out my Yelp Review here.

National Park Service hotels aren't typically very fancy, and that was okay with us, for the most part. The last time Greg and I visited Mammoth Cave, we'd stayed in Cave City, and hadn't liked it very much, especially the long drive from town to the park. Our hotel room wasn't fancy, but it was serviceable and clean. We did, however, immediately have to unplug the landline phone because the boys decided to start calling people. We've never had a landline, so the boys didn't "get" that this was a real phone.

Even though it was getting dark, we did want to check out the cave's historic entrance. Nick wanted to say that he'd seen the cave he was going to visit on his tour the next day. So we took the long walk down. It's really neat that when you walk down towards the cave, the air gets noticeably cooler and drier because the cave air is always in the upper 50s. 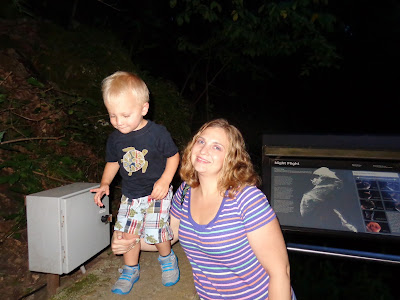 This is what the cave looked like at night. I know, I know. Really exciting. We didn't see any bats, but that's just because we didn't know what to look for--we learned later how to identify flying bats. 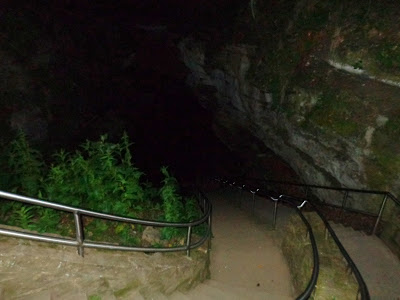 The walking felt pretty good after all day in the car, even if the view was limited by darkness. 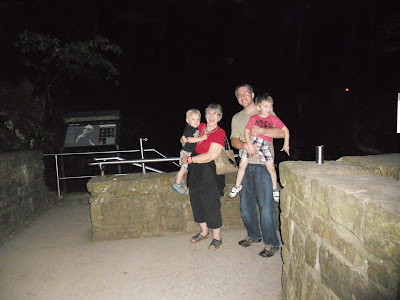