You Say You Want a Potty Training Update?

Or maybe you don't. No problem. No one says you have to read this. . . but I've been asked by several people to let them know how Nick has been doing with The Great Potty Challenge of 2011. After two weeks, I guess I would call him partly trained, or well on his way.

The picture below is of Nick showing off his latest potty prize--a foam sword from the $1 bin at Target. (Incidentally, he's also holding a cake pop from Starbucks. Yummy!) 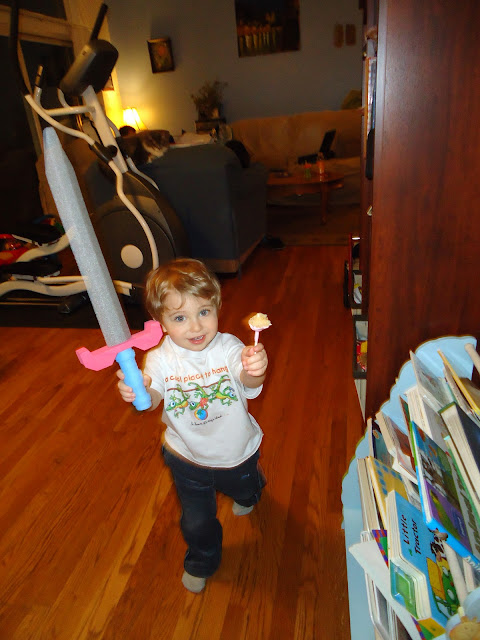 First of all, Greg did not potty train him in a weekend, not that any of us actually thought that would happen. But he got a good head start. There were a lot of incidents of backsliding and arguing, along with too many accidents to count. We never gave in, though, and Nick has been completely out of diapers for more than two weeks. (The only exception is overnight--we do still use a diaper then. We'll work on that another time.)

I do think we're making very significant progress, though. That first week or so, Nick averaged one successful potty trip per day. On Friday, he earned three prizes, on Saturday, he earned four, and today he earned three prizes. His accidents have gone from 5+ per day to only one or two. He's started "going" immediately when he sits on the potty. Even more impressive was last Tuesday, when Grandma Toni was trying to get him dressed, he started to go on the couch. She told him to hold it and he did! He stopped, ran to the bathroom, and made it to the potty. 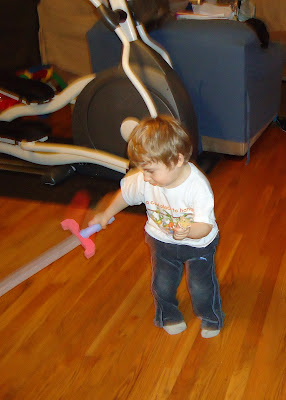 I've spent more money on prizes, man panties, and plastic cover up pants than I ever thought possible. My home is filled with very cheap, annoying toys that Nick has won for going on the potty instead of in his man panties. We've also learned some lessons:

1. Double or triple bag the boy when you leave the house. Today, for example, when we went out, Nick wore cheap Elmo underwear with thick Potty Scotty waterproof pants over them, and plastic pants over that. The cheap underwear is in case of a #2 accident--it's extremely hard to clean up, so we usually just throw out the underwear. Potty Scotty man panties cost nearly $9 a pair, so the extra layer is worth it.

2. Have plenty to do while in the potty. Some of Nick's prizes have been things to do in the potty, like a portable dry erase board, coloring books, books to read, and markers.

3. Have a comfortable place for an adult to sit. I feel like I've spent most of the last week sitting either on the bathroom floor or precariously on a stepstool, waiting for the magic moment.

4. Do laundry every day. Trust me, you do not want to run out of training pants! The good news is, I've never in my life been more caught up on laundry.

5. Let the kid pick his own prizes. This method seemed to work best for Nick after I took him to Target on Friday and let him fill the cart with prizes. He knew what he had to do to get those toys, and man, is he excited! My stepsister in law was telling me M and Ms worked for her kids. Not Nick. He wants the good stuff. I wish I could get him excited about an M and M. (My wallet would be grateful.)

Here he is in Target, helping pick his own prizes. 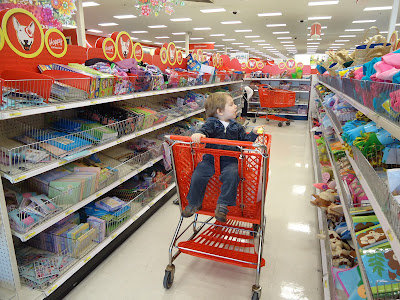 I'm nervous to see how potty training will go this week when Nick returns to daycare. He hasn't had as much success at the babysitter's house, and he's still afraid of public bathrooms (aren't we all), even though I bought him a portable seat to use while we're out.

Today, though, we left the house at 11 a.m. to run errands and didn't return until 2:30. Nick stayed dry the entire time, and went immediately as soon as we got home and put him on the potty. I find that amazing since I had to use the bathroom twice during that time period, and Greg went four times while we were out. After he went, he took a two hour nap, woke up DRY, and then immediately went on the potty successfully again. I would call that a very good day.  :) 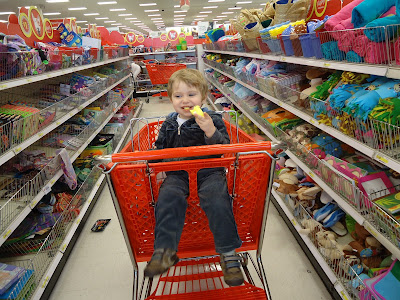