Dry Erase Markers, Being Too Busy, and Kicking

Last week one of Nick's pee-pee prizes was a little dry erase board and marker. Because I was naive, I let him take it with him to nap time. Frankly, I was exhausted and not thinking straight. The sudden, random tiredness that hit me all the time in the first trimester of this pregnancy has started returning with a vengeance, right on schedule in the third. 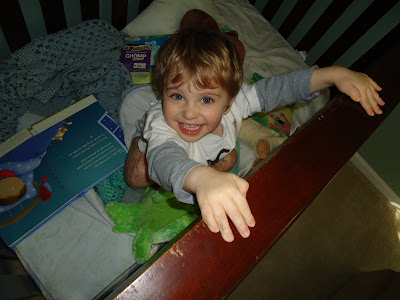 Do you see those cute little knees? Yup. Dry erase marker. Everywhere. He's been doing pretty well with potty training. He has even had several days without wet man panties. Nick has not, however, been able to go #2 in the potty. I have no idea why. I hope he figures that one out eventually. 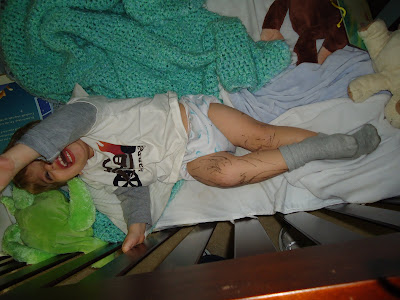 Today Nick used his first urinal--Greg took him into the men's room at the Kohl's, and held him up, and low and behold, success! This does present a problem for me, though. You see, Nick is afraid of public toilets, and the ladies rooms never have urinals. Hmm. It was hilarious when Nick came running out of the men's room. He announced to everyone at the service desk, "I went pee-pee in the potty!" They were duly impressed.

Pardon my absence lately--the last two weeks have probably been my busiest in years. I have a part time freelance writing job and I am under deadline, so I've been spending lots of time researching and typing like a madwoman. I have 5,000 words due by Thursday, but I got a lot done yesterday and today, so now I only have about 2,400 left to go. I'm trying to earn some extra money for all the diapers we're going to be going through very soon. I seem to remember an average of 8-10 diapers per day--I shudder to think.

Then, I have two teacher friends working on their National Board Certification. It's the highest honor a teacher can get in this country, and the only way to get a Master Teaching Certificate in Illinois. I became a NBCT in 2008, and now I help mentor other teachers working on their portfolios. I remember how excited I was when I got my new IL Teaching Certificate, and it read, "Master Teacher." Can't beat that feeling.   :)  Anyhow, I've spent the last few weeks reading their papers and giving them suggestions. Their final portfolios were due last Friday.

To top it all off, I had to make a little visit to the hospital. The little boy inside of me was being kind of lazy, and my doctor had warned me to call if I didn't feel movement over a 24 hour period. This kid has never moved very much, and maybe it's because I was so busy, but I couldn't feel him at all for well over a day.

My obstetrician had me go in to radiology to get an ultrasound and have the baby pass some tests. He started moving right away on the ultrasound, though I still couldn't feel it. My placenta is in a weird spot, in the front, and I think that's why movement is so muffled. I guess he passed all of the test with flying colors. Aw, he passed his first test. The doctor said that with this good of a test, the chances of anything being wrong are practically Nil. Plus, especially in the last two or three days, the baby has been dancing a jig. His movements have become stronger and I'm having less trouble feeling him.

Anyhow, the trip to the hospital was just a precaution, but now I've been extra careful with tracking movements. We found out that Greg can usually feel him with his hands, even when I feel nothing. So he is now in charge of kick counts. Seems like a fair deal, seeing as I have the responsibility of carrying the baby 24/7. Oh, and apparently dark chocolate and caffeine help--this little guy dances when I indulge.

Speaking of dancing a jig--here's Nick dancing in his crib. This is probably the last week he'll be sleeping in the crib. Greg got the toddler bed together, and we're just waiting for the new crib mattress to arrive. (The original one we ordered was the wrong size.) Nick is thrilled, and every time he passes his toddler bed, he announces, "That's my bed! I gonna sleep in there!" 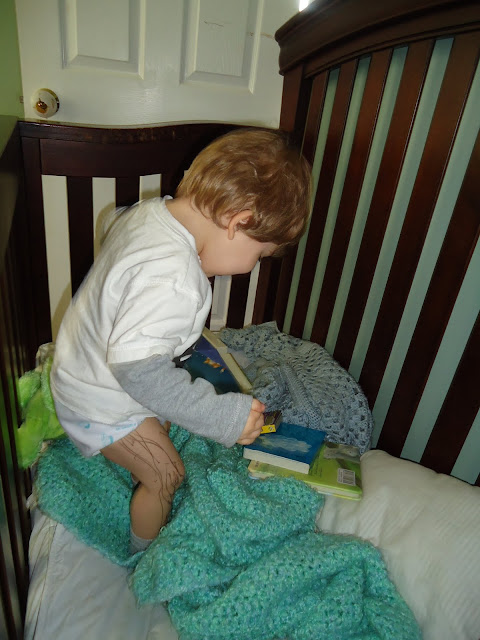